Young girls will love it 3 Stars

The tenth movie in The Swan Princess franchise arrives on digital from Sony Pictures Home Entertainment, The Swan Princess: A Royal Wedding, taking our heroes to China for their friends’ wedding.

Picking up pretty much where the previous chapter Kingdom of Music left off, Princess Mei Li (Stephanie Sheh) and her fiancé Chen (Alexander Chen) are getting ready to return home with her brother, Prince Li (Francis Huang), after winning the music festival. But as we are reminded in a flashback, Mei Li’s father, the Devine Emperor (George Tang), forbid their union and had his sorceress Fang (Lynna Yee & Vivian Lu) turn Chen into a dragon. That curse was lifted in the last chapter (obviously), yet the two young lovers are cautious about returning home. The Swan Princess, Odette (Nina Herzog), and Prince Derek accompany the three by boat back to China. Once they arrive, Odette, Derek, and Li make a trip to the palace to give the Emperor the good news, leaving Mei Li and Chen on board the boat until the coast is clear. Fearing the worst, Mei Li and Chen flee to the countryside, and as Li, Odette and Derek catch up with them, Mei Li is separated from the group and approached by Fang, who apparently has a crush on Chen. Fang places a spell on her, turning Mei Li into an old woman while Fang takes her identity, with Mei Li sentenced to death once Fang and Chen are married. Will Fang’s evil plot be discovered and thwarted in time?

I’ll admit, I struggled to really like this movie. It does have its moments in humor, particularly in the relationship between Uberta (Catherine Lavin) and Lord Rogers (Joseph Medrano), as well as their animal friends Jean Bob the frog (Clayton James), Puffin (Gardner Jaas) and turtle Speed (Doug Stone). Uberta and Lord Rogers masquerade as a Diva and her agent (respectively), with Uberta’s Diva disguise either intentionally or unintentionally looking suspiciously like Yzma from Disney’s The Emperor’s New Groove. There are also many cringe-inducing moments, such as Fang’s arguing with herself in the third person that comes off as very juvenile, even for a “family” picture. Although the story is fairly simple, the pacing of the film is aggravatingly slow, making the short 83 minute running time feel more like two hours. The animation in this tenth installment is once again directed by Richard Rich, and the animation style and quality is about what one would expect from a direct to video release, often using backgrounds that don’t always move at the same pace as the characters, who also have limited emotional facial expressions. This may all look fine for the movie’s intended audience (girls 10 and under), but most adults will see these seams falling apart rather easily.

Sony Wonder has released The Swan Princess: A Royal Wedding on digital platforms only (although they did make rental DVDs available to Redbox kiosks), and provided a Movies Anywhere code to redeem for this review. Interestingly, I was not able to view this movie on either FandangoNow or Google Play Movies. I’m assuming a MA license was not granted on those services, which just seems rather odd. My main screening of the film was on the Movies Anywhere app on my Roku Premiere. Overall, this was a pretty good streaming experience, with no noticeable compression artifacts whatsoever. Colors were vivid without appearing overly saturated or any evidence of blooming. What detail was there was very good, such as fabric textures, but I’m chalking up the apparent softness to the source material and not the encode. Contrast was good, not exactly great, and again I attribute that more to the source material.

Movies Anywhere offers the movie in Dolby Digital+ 5.1. Although nothing really special, it does it job very well, keeping dialogue well-prioritized mostly to the front center speaker, with effects and music spread across fronts and surrounds, with a few discrete sounds thrown in to the surrounds for emphasis. LFE is adequate, but never fully utilized.

Young girls, especially fans of this long-running franchise, will likely enjoy this film. For parents, YMMV. 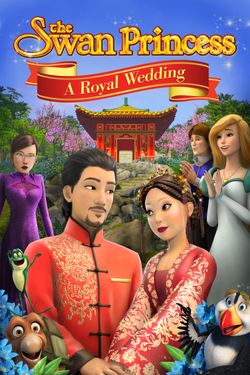