A Disney Wanna Be 3.5 Stars

To celebrate the film’s 25th Anniversary, Sony, in association with Nest Entertainment, has released The Swan Princess on Blu-ray as part of Sony’s MOD program.

Loosely based on the ballet Swan Lake, Director Richard Rich’s 1994 animated feature The Swan Princess has evil sorcerer Lord Rothbart (Jack Palance) banished by King Williams (Dakin Matthews) before Rothbart can use his dark magic known as “The Forbidden Arts” to overthrow and take possession of the kingdom. Many years later, as an act of revenge, Rothbart kidnaps the king’s daughter Princess Odette (Michelle Nicatro), casting a spell upon her that transforms her into a swan during the day and back to a human at night, but only if she is in the water when the moonlight strikes the surface of the lake. Rothbart will lift the spell if and only if Odette agrees to marry him, making him the new king. Prior to all of this, King William and Queen Uberta (Sandy Duncan), from a neighboring kingdom, had arranged for Odette to marry Prince Derek (Howard McGillin). Derek vows to find Odette and marry her, disregarding the king and queen’s assumptions that Odette is dead. In the lake, Odette befriends a turtle named Speed (Steven Wright), a frog named Jean-Bob (John Cleese), and a puffin named, well, Puffin (Steve Vinovich). Will the prince and princess ever be reunited? Will Odette’s curse be lifted?

The Swan Princess has the look and feel of a Disney animated feature, and for good reason. Richard Rich was a former animator at Disney, having directed The Fox and the Hound and The Black Cauldron at the studio before being let go in the mid 1980s. He would later form his own animation studio, Rich Animation Studios, staffing his company with other former Disney animators. After cutting their teeth and paying the bills by animating audio recordings from The Book of Mormon for Living Scriptures, Rich began production on The Swan Princess, utilizing the older process of hand-drawn and hand painted cel animation (by the time this film went into production, Disney and many other studios had transitioned to a more digital approach). There is an homage to Disney’s Cinderella, as Prince Derek and Princess Odette share a dream-like dance in the clouds. The film overall has the look of an early 1980s-era Disney animated feature, and the story moves along at a slog’s pace. The songs, although not very memorable, have that Menken-Ashman feel to them, almost as if they had been lifted from Beauty and the Beast. I found the film quite boring, but I’m sure young kids under 10, especially girls, will probably eat this up.

For this 25th Anniversary release, a new 4K scan of the 35mm film elements was created and was the basis of the transfer used.  The 1080p AVC-encoded transfer retains the film’s intended theatrical aspect ratio of 1.85:1. The image is stable, with vivid colors and very good contrast, providing deep blacks with minimal crushing. The increase in detail does make some of the weaker animated sequences more obvious and there is some evidence of cel dirt from time to time.

Sony’s Blu-ray release includes two English mixes, 7.1 or 5.1, both in DTS-HD MA. Both sound exceptionally well for a 25 year old film. Surround activity is quite good, used for music extension, atmospherics, and discrete effects. LFE is adequate, adding some low-end to the music. Dialogue is clear and understandable throughout, directed mostly to the center channel.

Looking Back at 25 Years of “The Swan Princess” (1080p; 10:16): This featurette starts out as if the filmmakers are going to wax nostalgic for ten minutes discussing how they made this film 25 years ago. 90 seconds in, it switches gears and relies more on archival interviews and behind the scenes clips with occasional new interviews (some with really poor audio).

The Swan Princess: Making of (480i; 26:36): An archival making of featurette that appeared on a special edition VHS release of the movie. The featurette appears as if it was taken from a bootlegged copy of the VHS release, making it very difficult to watch.

Sing-Alongs (1080p; 16:29): Clips of the five songs featured in the film, in Dolby Digital 2.0 stereo with lyric subtitles. Songs include This Is My Idea; Practice, Practice, Practice; Far Longer Than Forever; No More Mr. Nice Guy; and Princesses on Parade.

A box office dud upon its initial theatrical release in 1994, The Swan Princess has gained something of a cult following among families and their children thanks to home video and cable, and has spawned eight direct-to-video sequels at last count. This is the first time it has been released on Blu-ray, and looks and sounds great.

Thanks for the review, Todd. I remember enjoying this when I saw it once in the mid-'90s as a kid, but haven't seen it since and barely remember details of it. The Blu-ray release has made me curious to revisit it, although based on your review I might be safer with a streaming rental than a purchase. Sometimes movies from childhood that you haven't seen in a while hold up really well, and other times not, so whether I want to own this or not is an open question.
Reactions: Todd Erwin

They couldn't get Odetta to play the princess? That would have been something to remember. 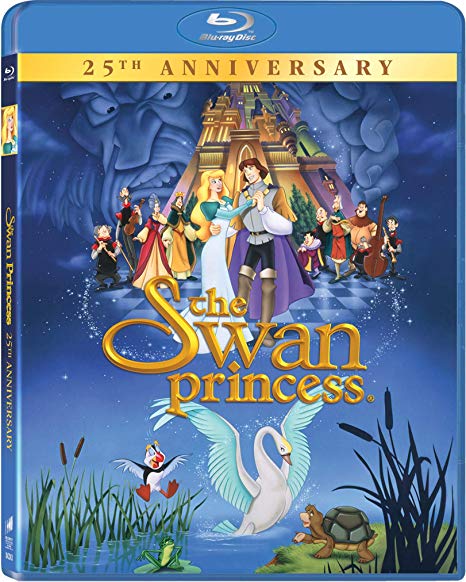