Forum List What's new Dark Style Change width
Log in Register
What's new Search
Menu
Log in
Register
Navigation
Install the app
More options
Dark Style
Close Menu
Posted on June 8, 2019 by Timothy Bodzioney
You are using an out of date browser. It may not display this or other websites correctly.
You should upgrade or use an alternative browser.
Recommended; how could one not enjoy Charles Laughton's zany performance? 4 Stars

Kino Lorber has released Joseph Pevney’s 1951 The Strange Door starring Charles Laughton and Boris Karloff.  This was Universal’s return after a six-year hiatus to the horror genre.  It could use more horror as I think it would be more accurately described as a Gothic Swashbuckler than a horror film.  Universal enforced this misconception with the casting of Karloff in a throw-away role but thank goodness Laughton saves the day delivering more ham than a decade of Easter dinners.

Universal stopped making ‘straight’ horror films around the time it merged with International Pictures in 1946.  Outside of Abbott and Costello’s encounters with monsters in the late 40s and early 50s the studio abstained from the horror genre.

But Universal abandoning the horror genre is a bit like MGM abandoning the musical or Warners abandoning crime movies.  It would only be a matter of time before they would be back at the well.  In 1951 Universal produced The Strange Door loosely based on The Sire of de Maletroit’s Door, written by Robert Louis Stevenson and published in 1877.

The Strange Door opens at night in a French village.  Sire Alain de Maletroit (Charles Laughton) enters a café where he meets two men.  The men point out the drunken and obnoxious Denis de Beaulieu (Richard Stapley) to Maletroit who approves of the knavish Beaulieu as a suitable choice for his plan and leaves.  The two men signal another man who picks a fight with Beaulieu and in short time the instigator is shot dead by Beulieu who escapes into a carriage and eventually finds himself in Maletroit’s mansion and is unable to escape.

The now sober Beaulieu learns from Maletroit that he is to be married to Maletroit’s niece Blanche (Sally Forrest).  When Beaulieu objects he is told that he has two options: consent or die.

The movie adapted by Jerry Sackheim, uses Stevenson’s short story of an aging French aristocrat punishing his niece for what he considers her brazen and dishonorable behavior regarding a young officer as a starting point and turns it into a totally unrelated revenge story.  In his commentary track Tom Weaver cites the 1935 film The Raven as the film’s probable inspiration.

While there certainly are several similarities to The Raven, I think it’s closer to a couple of Lon Chaney Sr. silent films, particularly West of Zanzibar where the villain is set on revenge by humiliating the daughter of woman he loved and lost to another man.  One of the problems of The Strange Door is that it doesn’t go far enough – I won’t spoil West of Zanzibar for anyone who hasn’t seen it, but it is so sordid and over the top that the makers of The Strange Door could only dream of going that far while the production code existed.  And it isn’t as gleefully nutty as The Raven which was produced at the beginning of the code.

I like the movie, but I think it is a stretch to even call it a horror film – I would call it a gothic swashbuckler.  In some ways the tone reminds me of Fritz Lang’s Moonfleet produced 5 years later at MGM.  A few years ago, I went through a phase where I watched a number of Universal 1950s costume dramas/adventures.  I’m not sure what I was expecting, but I was surprised at how good they looked, and The Strange Door too looks good utilizing sets we’ve seen numerous times before in Universal horror or Sherlock Holmes movies.  The camera work by Irving Glassberg and production design by Bernard Herzbrun, Nathan Juran, and Eric Orbom are very handsome for a low budget production.  Juran would go onto a directing career that includes genre favorites The Deadly Mantis, The Seventh Voyage of Sinbad, and 20 Million Miles to Earth.

One of the weaknesses of these later movies and The Strange Door is no exception is in the acting department; the character actors like Alan Napier, Paul Cavanagh, and Michael Pate are wonderful but, the romantic leads are pretty weak.  Post war actors often look silly or out of place in costume movies.

Stapley is erratic in a role that someone like Errol Flynn could have done in his sleep.  But to cut Stapley some slack, how many actors in the sound era are as good as Flynn in this kind of stuff?  It’s remarkable how few there are.  Poor Sally Forrest as Blanche just isn’t given anything to do so she can’t be blamed.  Boris Karloff was hired to trick audiences into thinking they were seeing a horror film and has a thankless role.  It’s the kind of role Lon Chaney, Jr. was undeservingly getting in this period.  According to Weaver, at least Karloff was paid well for only a couple weeks of work.

The direction, camera work, and production design cover a routine and mechanical script.  As I wrote above, Sackheim doesn’t do the actors any favors in the character department.  And the melodrama is thick and unlikely – it’s the kind of script that far too many things have to go exactly as planned for Maletroit’s revenge to be successfully enacted.  It’s the kind of movie where you think to yourself, what if he hadn’t done that? Or what if he had done that?  What if he went to another door in the Maletroit mansion?  I guess if Beaulieu had made any of these missteps, he would have saved himself, but there wouldn’t be any movie.

But it doesn’t matter because whenever Charles Laughton is onscreen, he radiates.  Laughton’s presence elevates the movie immeasurably.  To trot out a cliché, when Laughton isn’t onscreen you find yourself waiting for his return.  Laughton was an incredibly inventive and entertaining actor – one of the rare actors who can over and underplay.  Even when he’s doing nothing, he’s doing it flamboyantly.  He rolls his eyes, plays with food, stretches out on tables and does it all delightfully.  I think Billy Wilder, one of the few directors who loved Laughton, said that Laughton could do every line a hundred different ways and they would all be good.  I believe it.

Director Joseph Pevney started as an actor and moved behind the camera in around 1950.  He’s pretty much a journey man director who kept things moving and made a number of entertaining films like Female on the Beach, Away All Boats and Man of a Thousand Faces.  He moved to television when the studio system collapsed in the late 1950s where he directed hundreds of episodes of television shows like Ben Casey, Wagon Train, The Alfred Hitchcock Hour, The Munsters, Star Trek, and Bonanza.  Pevney does a good job on The Strange Door covering up a pedestrian script; he keeps it moving along and the action scenes are well done.

The Strange Door looks very nice.  I’m not sure of the source but it is pretty clean and detailed with deep blacks and good contrast.  Universal has done a very nice job of transferring their horror catalog (or in this case, what is sold as a horror title) by correcting timing to better show off the moody photography whose value was diminished on past overly brightened TV and video masters.

The audio is DTS-HD Master 2 mono and sounds very good as well.  Joseph Geshenson is credited as Musical Director but the score reuses lots of cues from past Universal films.

Audio commentary by Tom Weaver, David Schecter, and Dr. Robert J. Kiss.  Until I started reviewing last year for Home Theatre Forum, I rarely listened to commentary tracks.  This is the first I have heard from Weaver and it is one of the best I’ve heard.  It really is more like an audio documentary as Weaver shares the mic with Schecter and Kiss to discuss their areas of expertise.  Weaver also uses actors to recreate quoted interviews with actors and craftsmen who worked on the film.  Weaver’s research into films like The Strange Door is extensive and he gives plenty of interesting production details, even down to the exact days of shooting of particular scenes.  One of the few interpretive observations he makes that I disagree with is when he states that the Laughton character Maletroit is gay.  Based on Laughton mannerisms one could maybe say this of all characters he plays, but in this case, it makes little sense as he motivated by losing a woman to his brother twenty years earlier.  For what it’s worth I claim that the Christopher Lee and Jack Palance characters in The House That Dripped Blood and Torture Garden are gay, but plenty disagree with me.

Kino Lorber’s release of The Strange Door is a welcome one, especially for Universal completists.  It’s the kind of movie that as a kid had I waited up until The Late, Late Show for I would have been disappointed – no monsters and too little Karloff; I certainly wouldn’t have lasted until 3am.  I certainly would not have appreciated Laughton then.  It’s the kind of movie best encountered with lower expectations as it is entertaining and unpretentious and definitely worth seeing for Laughton in all his unrestrained, undirected glory.

Thank you Timothy for your fine review. I don't have any recollection of seeing this film so I'll probably do a blind buy next month during Kino's July sale.

Robert, it's worth a blind buy if you like Laughton. If you do, you won't be disappointed.

Timothy Bodzioney said:
Robert, it's worth a blind buy if you like Laughton. If you do, you won't be disappointed.
Click to expand...

Yeah, he's a favorite actor of mine going back to Hunchback and underrated The Canterville Ghost which were personal childhood favorites of mine. By the way, I asked you a question back in the Reviewers area.

I hope someone releases Universal's The Black Castle (1952) soon.

I think I read that Shout! has it.

Timothy Bodzioney said:
I think I read that Shout! has it.
Click to expand...

That's Great News ! Thanks Tim
You must log in or register to reply here. 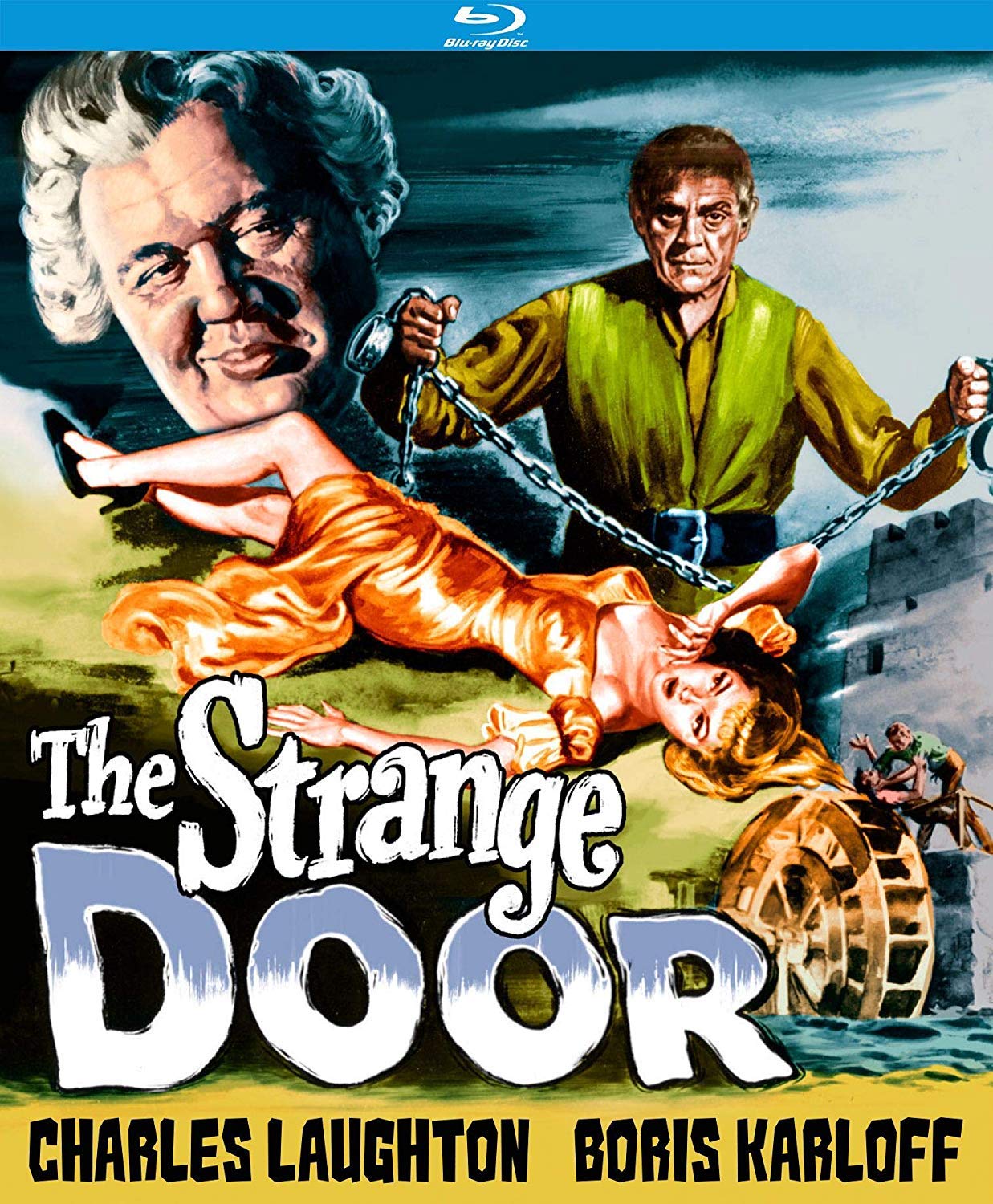