Forum List What's new Dark Style Change width
Log in Register
What's new Search
Menu
Log in
Register
Navigation
Install the app
More options
Dark Style
Close Menu
Posted on December 6, 2019 by Matt Hough
You are using an out of date browser. It may not display this or other websites correctly.
You should upgrade or use an alternative browser.
Engrossing pre-Code melodrama with an outstanding central performance. 4 Stars

Stephen Roberts’ The Story of Temple Drake is long overdue for a serious reexamination of its many fine features, and Criterion’s new Blu-ray release puts the goods out front and center for our perusal.

A provocative pre-Code film based on a salacious book that had pretty much passed unseen for decades, Stephen Roberts’ The Story of Temple Drake brings back into public consciousness a prickly story of a 1930s-era woman victimized by her society but who manages to conquer her fears and earn a virtue which should be prized. This movie offers another side of Miriam Hopkins’ talent unjustly kept from the public for far too long and is most welcome in Criterion’s new Blu-ray release.

Vixenish Temple Drake (Miriam Hopkins) enjoys sexually teasing the upper class men in her Southern societal realm, but a freak automobile accident with drunken companion Toddy Gowan (William Collier Jr.) brings her down a few societal notches when she seeks solace in an abandoned plantation house and finds within a raft of bootleggers who are operating out of there. Almost all of the men eye her as a sexual prize to be taken, but moll Ruby Lemarr (Florence Eldridge) tries her best to shield Temple from their avaricious behavior. Gangland chief Trigger (Jack La Rue), however, won’t be denied and kills simple-minded guard Tommy Bassett (James Eagles) to have his way with her. Tommy’s murder is blamed on Ruby’s husband Lee (Irving Pichel) who’s certain to be convicted unless Temple can assist in his defense. In order to do that, however, she’ll have to admit to her own transgressions sullying her reputation forever in the process.

Based on William Faulkner’s controversial book Sanctuary, Oliver H.P. Garrett’s screenplay soft-pedals some of the book’s more lurid escapades but is still plenty explicit for 1933. The script and Stephen Roberts’ direction manage to imply the sexual and physical violence with sound and clever cinematography (achieved by the Oscar-winning Karl Struss), but there is never any doubt who’s getting raped and who’s getting killed. Roberts achieves a very stylish bit of suspenseful business when the lecherous Trigger enters Temple’s darkened bedroom and all we can see is the lighted tip of the perpetual cigarette dangling from his lips. Later we can see Tigger climbing a ladder in the barn out of focus but clearly up to no good while Temple and Tommy exchange a few morning pleasantries, another wonderful use of the entire frame to set up another perilous situation for the film’s title character. The film makes it quite clear that while the film’s women may hold some sexual sway over men, they’re basically there to be slapped and manhandled at the whim of their keepers, that is, until they manage to find their own backbones and stand up for their rights. When that happens, The Story of Temple Drake takes on a more modern idea of womanhood that fits right into other pre-Code films like The Divorcee, Baby Face, and Merrily We Go to Hell which put their women on equal planes with the men who desire them.

Miriam Hopkins has a field day as the title character, vamping a handful of suitors while later cringing in fright before a different group of guys who play by their own set of rules stacked in their favor. She also gets to use her natural Southern accent that rings so true amid other phonier examples from the actors who surround her. Second-billed William Gargan is the woodenly upstanding lawyer who loves Temple in vain and then asks that she forget her vanity in order to save an innocent man’s life. Florence Eldridge is strong and commanding as the feisty wife holding off the men panting for Temple but also letting her know how much she despises her ilk who don’t know (up to that point at least) what real life is all about. Jack La Rue is all flaring nostrils and physical urges as the evil Trigger while James Eagles is heartbreaking as the innocent Tommy. It’s always a delight to see Elizabeth Patterson, Louise Beavers, and Gertrude Howard even in small, underappreciated roles.

The film is framed at 1.33:1 and is presented in 1080p resolution using the AVC codec. It’s a very film-like transfer with a definite grain structure that’s been maintained, and the grayscale is strong if not quite always as deep black as one would like. There’s just a bit of damage midway through the movie, but scratches and dirt are not a problem. Sharpness is also quite good. The movie has been divided into 13 chapters.

The PCM 1.0 sound mix is relatively strong and clear. Though clearly not possessing the fidelity of later films, the soundtrack blends the dialogue, music, and sound effects quite expertly. There is just a bit of light hiss to be heard later in the movie, but other aural anomalies like crackle and flutter are never a problem.

Honest Expression (14:21, HD): critic Mick LaSalle discusses the film from a censorship and Production Code point-of-view offering information on its problems and issues in getting the material okayed for production.

Casting a Shadow (17:58, HD): cinematographer John Bailey and Matt Severson, director of the Margaret Herrick Library at the Academy of Motion Picture Arts and Sciences, discuss the film’s visual style and examine storyboards and other archival materials relating to its production.

Enclosed Pamphlet: contains the cast and crew lists, information on the audio and video transfer, era publicity posters for the movie, and critic Geoffrey O’Brien’s effusive essay on the movie’s many virtues.

Stephen Roberts’ The Story of Temple Drake is long overdue for a serious reexamination of its many fine features, and Criterion’s new Blu-ray release puts the goods out front and center for our perusal. It’s a fine film which also offers an interesting and informative selection of bonus material to further one’s understanding of filmmaking during that era. Recommended!

Terrific film, that needs to be considered from a 1933 perspective

Love the review, Matt (I still can't believe this is coming out on Blu-ray!)

I saw this film at MoMA at its modern premiere in 1972. I believe it was a nitrate print that was immaculate. It still had the power to shock. One must remember that this film had been pulled from circulation since the implementation of the Code in 1934, and that it survived intact simply because it was not allowed to be re-released. By sheer luck, it wasn't junked, nor did it suffer nitrate rot. And here it is: Enjoy! Hopkins lived to see it one last time a week or two before her demise.

Fantastic review, Matt. I had not heard of this film until I read about the Criterion release. This will be a blind buy, but from you review and what I have read about the film elsewhere, it will definitely be worth it!

Great review, I was on the fence with this one since it would be a blind buy, but you've convinced me. I typically enjoy these pre-code films.

Temple Drake may be the first example in literature (Faulkner's Sanctuary) and in film of the Stockholm Syndrome. I'm sure it was hard to understand in 1933. The novel, of course, was successful because it was, in Faulkner's words, a potboiler written with one thought in mind: to make money.

I have watched it twice already--it's very short. It's wild.

Watched this last night too. Enjoyed it but does seem mild (if you're talking sordid) compared to William Wellman's 1931 SAFE IN HELL.There is certainly no uplift to end that movie. And Dorothy MacKaill deserved a chance at a longer career--- if she desired it. SAFE IN HELL usually plays two or three times a year on TCM. I hope Criterion has their sights on that title; there are some nice Wellman touches in it.

Glenn Erickson just posted his review of The Story of Temple Drake bluray. It matches Matt's fine piece on the film. And here is DVD Savant's take, from nine years ago, of the Warner Archive DVD Safe in Hell.
Last edited: Dec 10, 2019
You must log in or register to reply here.

A new version of The King And I is on its way! 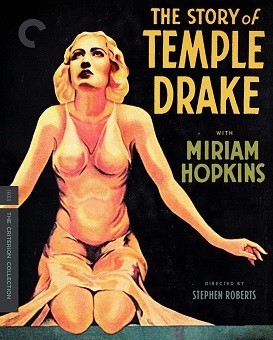