Forum List What's new Dark Style Change width
Log in Register
What's new Search
Menu
Log in
Register
Navigation
Install the app
More options
Dark Style
Close Menu
Posted on March 6, 2020 by Matt Hough
You are using an out of date browser. It may not display this or other websites correctly.
You should upgrade or use an alternative browser.
lethargic, lackluster western suspense film that should have been better 2.5 Stars

A plodding cat-and-mouse western meant to be suspenseful and yet letting the viewer down with long stretches of tedium, Robert Mulligan’s The Stalking Moon should have been far better than it turned out to be.

A plodding cat-and-mouse western meant to be suspenseful and yet letting the viewer down with long stretches of tedium, Robert Mulligan’s The Stalking Moon should have been far better than it turned out to be. With gripping source material (the novel by Theodore V. Olsen) and the potential for real terror on the prairie, the film squanders its many opportunities for chills and delivers only fitfully in its last half hour.

After fifteen years as an Indian tracker for the Army, Sam Varner (Gregory Peck) decides to retire from the hunt and retire to his ranch in New Mexico where he plans to raise cattle and be a gentleman farmer. In his last Indian mission, he finds Sarah Carver (Eva Marie Saint), a white woman who had been captured and held prisoner by the Apache for a decade. During that time, she has given birth to a mixed race child (Noland Clay) whose father Salvaje (Nathaniel Narcisco), a cutthroat Indian determined to claim his child and willing to kill everyone in his path, has escaped from the recent capture. Sarah begs Sam to take her and her child with him away from the fort knowing Salvaje will be returning and looking for them, and while at first Sam is reluctant, he agrees to take her along to be his cook and housekeeper on his ranch. But Salvaje is indeed on their trail, and it won’t be long before a confrontation is imminent.

Scripted by Alvin Sargent from the aforementioned novel, he takes a long, long time to stir up any real excitement. For over an hour, we get word of how lethal the renegade Salvaje is, and we’re even present at the aftermath of one of his solo raids where he doesn’t leave a single man alive in a stagecoach junction station. So why in the world would Peck’s Sam Varner not take the time to set up real defenses against this maniac once he gets home? Late in the film, Sam falls victim to a booby trap set by the clever Apache, but why couldn’t Sam, schooled in the ways of Indians, have surrounded his property with similar traps and protections? Over and over, Sam and his friend Nick (Robert Forster) and his older ranch hand (Russell Thorson) make one idiotic mistake after another once they’re under fire, enough mistakes to frustrate the average viewer enough to almost begin pulling for the other side. Director Robert Mulligan takes the time to show the majesty and solitude of this part of the west, and he keeps his savage antagonist an almost ethereal menacing entity for most of the film’s running time, but his overly deliberate pacing of the action is needlessly lethargic. The climactic showdown between Sam and Salvaje does get the blood stirring at long last in the film’s final few minutes, but it could and should have been more tautly helmed from the get-go.

Gregory Peck even in his fifties by the time of the movie’s production projects integrity and forthrightness in heaping amounts, and his open-hearted acceptance of the woman and her child with no expectations or ulterior motives is almost unique in westerns of the period (there is not a trace of romance in the air). He also handles the action scenes just fine once they inevitably arrive. Eva Marie Saint’s performance is a disappointment. She’s subdued and fairly unemotional throughout despite being in such a precarious position, and her character sits and stares for much of the movie with little to add to the film’s tone (the character doesn’t even assist when there are graves to be dug for the innocent people who died because of her presence). Robert Forster in one of his earliest movie roles has screen charisma aplenty as the mixed race Indian friend whose loyalty is unquestioned. When he finally appears, Nathaniel Narcisco offers a frightening presence without uttering a sound as the film’s villain, and Russell Thorson, Lonny Chapman, and Henry Beckman do nicely with their small roles.

The film’s Panavision aspect ratio of 2.35:1 is faithfully rendered in this 1080p transfer using the AVC codec. The image is spotlessly clean and inviting. It’s sharp, has excellent color, and boasts impressive shadow detail with its very admirable black levels. There is no chapter listing in the main menu, but the film has been divided into 20 chapters.

The DTS-HD Master Audio 2.0 mono sound mix replicates the sound design of its era wonderfully. Dialogue has been expertly recorded and has been mixed with Fred Karlin’s background score and the moody sound effects which excellently establish the wildness of the prairie and hills where the action transpires. There are no age-related problems with hiss, crackle, pops, or flutter.

Robert Mulligan’s The Stalking Moon is a disappointing western suspense film. With excellent actors and a great set-up, the potential for an exciting adventure film was certainly there, but lackluster pacing and insufficiently developed narrative flow frustrate more than they electrify. The Warner Archive Blu-ray, on the other hand, offers the expected pristine sound and picture for fans of the film or stars.

I liked the novel horror/western hybrid vibe better than you did, but it is definitely a slow burn proposition. Have not seen the Blu-ray, just the DVD from around 12 years ago or so.

I had previously seen it on TV in a non-widescreen presentation, so the DVD was a revelation at the time since the compositions really exploit the whole scope frame.

I too enjoy the film far more than Matt does. I've never found any of it dull. I'm very pleased the picture quality of this new disc is so good as I was always a bit disappointed with the DVD.

Thank you for your fine review. Yeah, this western isn't for everyone. It's a very slow burn in which many people are not accustom to, in a "western" setting.

I watched the DVD a couple of weeks ago. I love Gregory Peck and Eva Marie Saint....but I kept pausing it and doing something else for awhile because I was quite bored.

I saw this at Tarantino's Austin film fest back in 99 -- his own non-widescreen print I believe -- and I kept waiting to see what he saw in it besides Forster but I found it plodding without depth.

I don’t have a good enough memory to know whether I liked this film. The blu ray cover art is fabulous.
You must log in or register to reply here. 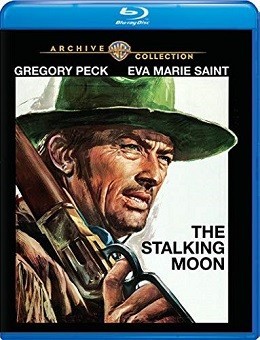