Forum List What's new Dark Style Change width
Log in Register
What's new Search
Menu
Log in
Register
Navigation
Install the app
More options
Dark Style
Close Menu
Posted on November 4, 2018 by Erwin Ordoñez
You are using an out of date browser. It may not display this or other websites correctly.
You should upgrade or use an alternative browser.
Great action sequences for an okay movie 2.5 Stars

With surprisingly entertaining action sequences, The Spy Who Dumped Me suffers from various clichés and jokes that do not land.

Audrey (Mila Kunis) finds herself at a birthday party thrown for her by her best friend Morgan (Kate Mckinnon) just a few days after being dumped by her ex Drew (Justin Theroux). That same night, Kate convinces Audrey to burn most of Drew’s belonging including a plastic 2nd place Fantasy Football trophy. The day after, Audrey gets shoved in the back of a van by a CIA and MI6 agents Sebastian (Sam Heughan) and Duffer (Hasan Mihnaj), respectively, who reveal that Drew is actually CIA agent who has gone missing. They are searching for a package – the trophy – that Drew was supposed to deliver. Drew randomly appears at Audrey’s apartment the later that day to retrieve his possessions but “very bad people” start shooting into the apartment. Drew tells Audrey she has to deliver the trophy to his contact in Vienna in case he does not survive. He gets shot by one of the bad guys and is presumed dead. Audrey and Morgan are embarked with the task of delivering the trophy on their own while they are marked as fugitives and are being searched by several organizations who will try to kill them to get it.

The Spy Who Dumped Me surprised me with its excellent action sequences that are filled with great camera work and stunts. That being said, the movie brings nothing new to the spy genre. It is filled with several twist and turns that try to be clever but come off as cliché and can be seen coming from miles away. Although I did find myself chuckling and some jokes, the comedy does not always land. Some jokes feel forced and distract you from what actually could be an entertaining sequence. Director Susanna Fogel (Life Partners, Famous In Love) does the best she can with this script but definitely deserves better material as it is noticeable she could direct a good spy movie with better writing. Mila Kunis’ character is the better half of the two as Kate McKinnon is only in this movie for jokes. Kudos to Sam Heughan, though, for giving it his all and being the standout character. At 4 minutes away from 2 hours, the movie feels a half hour longer than it should be. For a movie that takes you around the world, it had a lot of potential but ultimately ended up being bland and forgettable.

The Spy Who Dumped Me was completed as 2K DI with a 2160p transfer for this release. This 4k UHD Blu-Ray contains the film with Dolby Vision, HDR10 and a 2.40:1 aspect ratio. The differences between the Blu-ray and the UHD version are minimal but noticeable. The facial textures on the characters stand out more on the UHD version and I did not notice any grain throughout the movie which is impressive coming from a transfer. Some action sequences are shown with the colors dimed. The contrast in these sequences is excellent and give the movie a more dramatic feel.  For a rather annoying scene, Kate McKinnon’s “fight” sequence in the third act stands because its contrast between the background and the foreground alongside her colorful outfit.

Like some previous Lionsgate tittles, both the Blu-Ray and the UHD dics are blessed with a Dolby Atmos track.  Watching this in a 7.1.2 set up, The Spy Who Dumped Me takes advantage of the surround and height speakers. There is a chase scene where our characters are in a car being followed by motorcycles where the Atmos truly stands out. The bikes, the bullets and objects being thrown can be heard through every speaker from the respective “sections” some sounds even move around the space following the camera movements and cuts. My only issue would be that the sound coming from the surround speakers could be slightly louder and the LFE can sometimes feel forgettable. Gun shoots don’t have a heavy the heavy “thump” audiences have come to get used to, specially when they are the center of attention.

Surprisingly, both the Blu-Ray and UHD discs include the special features. A relieve for those of us who do not like changing discs after watching the film to watch the behind the scenes.

Covert Operations: The Making of The Spy Who Dumped Me (2160p & 1080p; 11:15): Interviews with the cast, director and producers and some interesting behind the scenes footage.

Makin’ Friends with Hasan Minhaj (2160p & 1080p; 6:46): Fun sketch with actor Husan Minhaj walking around trying to make friends with every one in the cast and crew on set.

Not even the great action sequences, the excellent camera work and great look can save The Spy Who Dumped Me from being a forgettable movie. 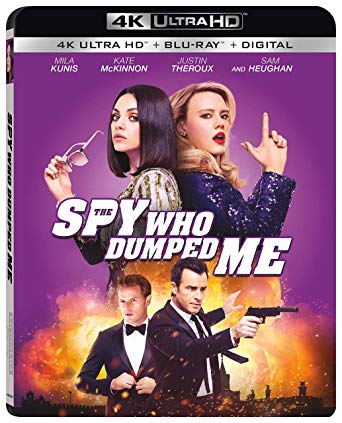