A surprisingly effective blend of the spy thriller and comedy genres. 4 Stars

The Spy Who Dumped Me is a surprisingly effective blend of genres, combining the tried and true cliches of the spy thriller with more modern sensibilities of a female-led buddy comedy. Between Mila Kunis’ more grounded performance, the crazed antics of Kate McKinnon, and the suaveness of Justin Theroux and Sam Heughan, the film is constantly shifting gears and tone, but manages to come together in a satisfying way.

Audrey (Mila Kunis) has just been dumped. Her boyfriend Drew (Justin Theroux) hasn’t even bothered to do this in person, opting to send her a text message instead and then vanishing completely. When Audrey’s best friend Morgan (Kate McKinnon) finds out, she’s determined to help Audrey bury the relationship and move on. For someone like Morgan, this means taking Audrey’s phone and sending Drew a text that they’re going to burn everything he’s left behind at Audrey’s apartment. As soon as this text gets sent, Drew breaks his silence and promises to return tomorrow to collect his things. But before that can happen, Audrey is taken by a British man named Sebastian (Sam Heughan), who claims that Drew was actually a spy employed by the C.I.A.; Sebastian claims to work for British Intelligence. When Audrey does return home, Drew finds her there, explaining that he hid a valuable piece of intelligence in an old trophy stashed at her place, a piece of information that people will kill to acquire. While trying to explain, Audrey’s apartment is attacked, and Drew is mortally wounded; with his last words, he asks Audrey to take the trophy to Vienna, and that the world is at risk if she doesn’t.

While Audrey is disturbed by Drew’s revelations and hesitant to complete is mission, Morgan is fully enthusiastic. Morgan points out that they’re already being chased, and that their passports are already in her car, so they might as well go ahead with it. As they land in Europe and attempt to complete Drew’s mission, they run into every obstacle imaginable, including double crosses, violent shootouts, kidnappings and torture. Never knowing who to trust, Audrey and Morgan somehow feel their way through each situation, and discover that they’re not so bad at this whole spy thing after all.

One of the better choices made by co-writer/director Susanna Fogel was the decision to shoot the film in a variety of styles, taking cues from the different genres that it fuses together. In an opening action sequence, for instance, which features Drew on a violent mission gone wrong, the filmmakers shoot it with a style straight out of the Bourne Identity movies, full of desaturated, shaky camera work and quick cuts. But when the film then transitions to more domestic life to introduce Audrey and Morgan, the style switches to a simpler, more basic and more colorful style that would be completely at home in a romantic comedy. As Audrey gets pulled from her normal life into the spy world, the look changes yet again. At first, it mirrors the same Bourne-inspired look, but evolves into something else as Audrey and Morgan become more involved in the spy world and grow more skilled. By the time of the film’s final set pieces, the filmmakers are in full 007 mode, mimicking both the frantic action and the glamorous production design of the James Bond series.

Just as the film’s look varies as the story hops from genre to genre, so does the tone. Grounding the film throughout is Mila Kunis, who is able to ground her performance and give the film a sense of reality. Because Kunis plays Audrey as a real person in an extraordinary position, the events of the film carry some weight, and her adventures becoming compelling on their own merits; she allows the film to be more than mere parody. With Kunis providing that anchor, Kate McKinnon is able to go all-in on her portrayal of Morgan as the wacky friend, the kind of character that you’d never believe is a real person were it not for the fact that she reminds you of someone you know. She plays Morgan as the type of friend who is always on the verge of causing embarrassment but whose loyalty and love are never in doubt. The male leads are well cast, with Justin Theroux and Sam Heughan appearing just as you’d expect a movie spy to appear if they stepped out into the real world. The film also has some great supporting work by Gillian Anderson and Hasan Minhaj, and a wonderful bit of casting with Paul Reiser and Jane Curtin appearing briefly as Morgan’s parents.

While The Spy Who Dumped Me is by no means groundbreaking entertainment, it takes a fun premise and runs with it. At 116 minutes, there are a few spots that start to drag a little, but the film ultimately regains the momentum it occasionally misplaces. The quality of the performances, the direction and the rest of the technical credits do a very good job of making up for a script that at times seems underdeveloped. Still, The Spy Who Dumped Me is far from the only film that relies on its talented cast and crew to make up for an underdeveloped script, and the premise is strong enough to withstand it.

The Spy Who Dumped Me is presented in its original aspect ratio of 2.40:1. The presentation on Lionsgate’s Blu-ray is fantastic, with the disc doing a great job of handling the movie’s different looks. While the darker, grittier early scenes appear as stylized as they’re meant to, the more colorful moments truly pop. There are no obvious signs of untoward digital manipulation nor are there any compression artifacts.

The primary audio on the disc is a Dolby Atmos track with a Dolby TrueHD 7.1 core. As I am not currently Atmos or 7.1 equipped, the audio track was downmixed to 5.1 by my receiver and sounded phenomenal. The action sequences made great use of both the surround and LFE channels, with great separation and placement during the film’s more frantic moments. Dialogue is well-recorded and mixed in the track, never getting lost despite the series of explosions and car chases that frequently occur.

Optional English SDH subtitles are also included, as is a Spanish-language dub which appears in the lossy Dolby Digital 5.1 format.

Covert Operations: The Making Of The Spy Who Dumped Me (11:15, HD) – A standard EPK-style behind-the-scenes peek.

Gary Powell: The Action Behind The Film (09:04, HD) – A short featurette on the film’s stunt coordinator.

Makin’ Friends With Hasan Minhaj (06:46, HD) – Minhaj hosts this short featurette that’s meant to be a humorous look at his off-camera experiences on set.

Deleted Scenes (09:35) – Eleven brief scenes which can be played individually or together.

Off Script (06:07) – Some of the cast’s on set improvisations are collected here, with McKinnon’s jokes taking center stage.

Outtakes (6:41, HD) – While the cast is clearly having fun, unfortunately this gag reel isn’t as entertaining for the home viewer.

Digital Copy – A digital copy coupon is included which allows a single redemption at iTunes, GooglePlay, Steam, Vudu or FandangoNow.

The Spy Who Dumped Me is a surprisingly effective action comedy, which doesn’t skimp on either as it fuses both genres together. Though the script is a little underdeveloped, the fine work by the cast, led by Mila Kunis and Kate McKinnon, make the film a winner. The technical presentation on Lionsgate’s Blu-ray release is outstanding, though the special features are not particularly deep. Fans of the film should be satisfied with this release, and the top notch stunt work should appeal to fans of the spy genre as well. 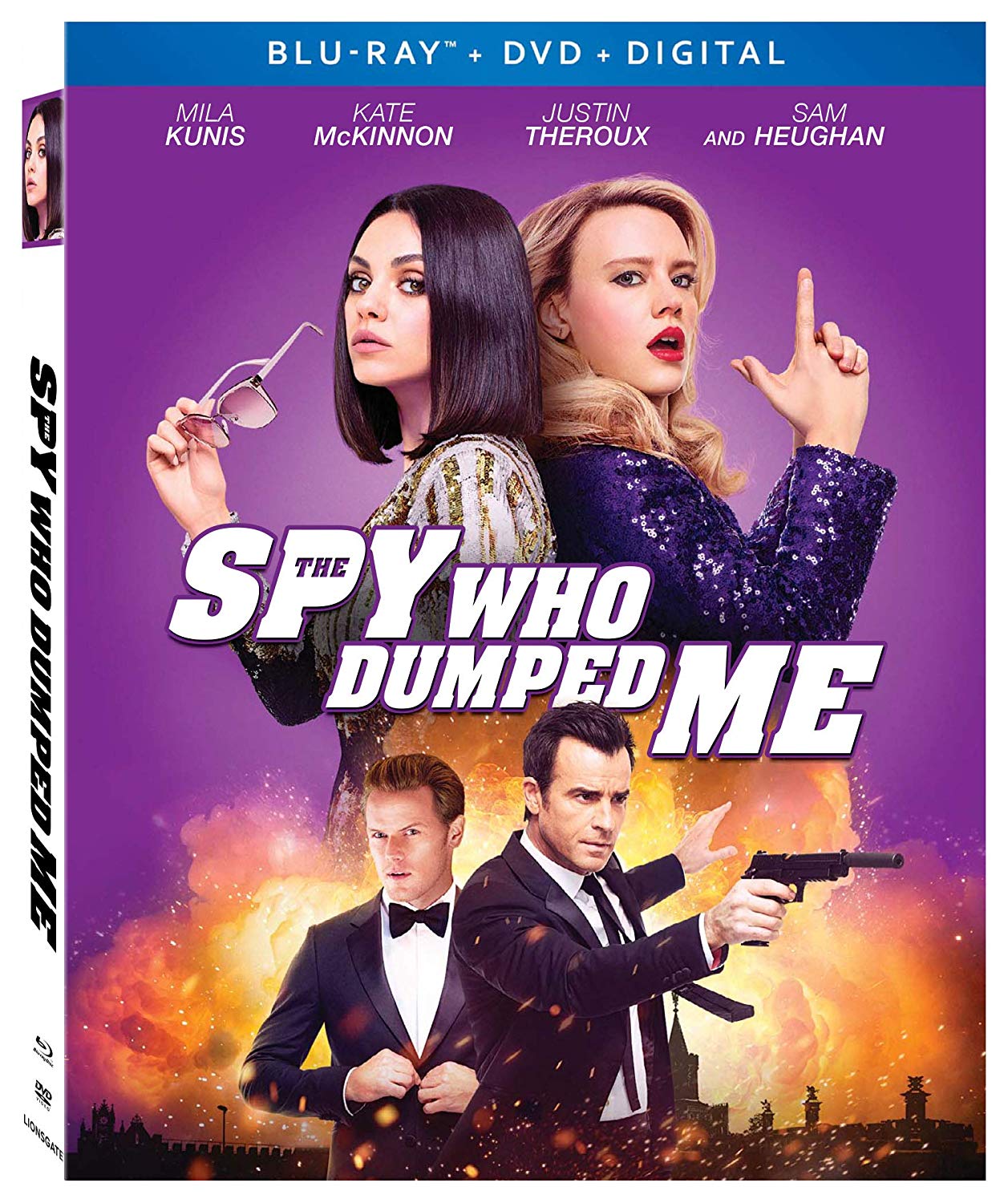