Forum List What's new Dark Style Change width
Log in Register
What's new Search
Menu
Log in
Register
Navigation
Install the app
More options
Dark Style
Close Menu
Posted on March 13, 2020 by Matt Hough
You are using an out of date browser. It may not display this or other websites correctly.
You should upgrade or use an alternative browser.
well made, lesser known Dietrich vehicle of the 1930s. 4 Stars

Because it fell between two of her most famous movies Blonde Venus and The Scarlet Empress, Rouben Mamoulian’s The Song of Songs isn’t nearly as well-known as Marlene Dietrich other 1930s’ films.

In the midst of her legendary eight-film series with her mentor/director Josef von Sternberg, Marlene Dietrich undertook a film without him, Rouben Mamoulian’s The Song of Songs. The story had already been filmed twice before, both for the silent screen, but this first sound version allowed Dietrich to spread her wings more fully than she had ever been allowed to do under von Sternberg’s thumb and consequently she turned in one of her most well-rounded and complex characterizations. In addition, the creative sophistication that the director had brought to his versions of Dr. Jekyll and Mr. Hyde and Love Me Tonight (and which he would bring this same year to Garbo’s Queen Christina) offered Dietrich a much different milieu in which to emote, and she gives one of her finest performances as a result.

Innocent German peasant girl Lily Czepanek (Marlene Dietrich) now orphaned comes to live in Berlin with her alcoholic aunt Mrs. Rasmussen (Alison Skipworth), a bookseller who’s barely scraping out a living. When she meets struggling sculptor Richard Waldow (Brian Aherne), she reluctantly consents to pose in the nude for him in order for him to craft a statue that will fulfill his obligation to the wealthy Baron von Merzbach (Lionel Atwill). She falls in love with the sculptor as he does with her, but he knows he can never offer her the life of wealth and privilege that she deserves, and he agrees that the smitten albeit hedonistic baron can try to woo her instead. Hurt by Richard’s betrayal, she agrees to marry the Baron, the first in a series of unfortunate choices which will drastically alter her life and fortunes.

The screenplay by Leo Birinski and Samuel Hoffenstein has been adapted from the novel by Hermann Sudermann and play by Edward Sheldon, and while it pretty much follows a familiar 1930s’ formula of a loss of innocence at the hands of a pit of various vipers out to get what they want, it’s nonetheless entertaining in the way pre-Code films can express degradation and carnality that they wouldn’t be allowed to do once the Hayes Code began to be more fully enforced. Director Rouben Mamoulian cleverly juxtaposes Dietrich’s various degrees of nudity with statuary in the sculptor’s studio, and yet he also takes numerous lingering close-ups on a naked pencil sketch and the resultant nude statue of Dietrich throughout the film’s 90-minute running time which leave nothing to the imagination. He also uses shadows adroitly (as he did in Dr. Jekyll and Love Me Tonight and as he would later do in Blood and Sand and Silk Stockings) to show Dietrich undressing while her wedding night becomes a viewing party for two household servants while clouds overhead boil threateningly (only reiterating the potential repugnance to come from the Death’s Head on the Baron’s military cap). Mamoulian’s painterly eye also comes to the fore during a later sequence of riding in the forest where dappled sunlight bounces off the water, the leaves of the trees, and even the teeth of two potential lovers), and he wittily uses double exposure to contrast the innocent and worldly Dietrich in a climactic showdown between her and the sculptor. As was often the case in her Paramount years, Frederick Hollander provides Dietrich with a signature song (this time “Jonny”).

The role of Lily Czepanek allows Marlene Dietrich the chance to traverse the full gamut of emotions from innocence to world weariness, and she does beautifully in her measured transformation (a good thing, too, since her next film The Scarlet Empress would require even more of a stretch of her acting gifts, and she would be fully ready to take it on due to her work in this movie). In his movie debut, Brian Aherne is impossibly youthful and appealing, his resonant voice allowing him to hold his own in scenes with the more experienced screen actors around him. Lionel Atwill is obviously relishing the perverse Baron that he acts to the hilt, and Alison Skipworth steals all of her scenes, too, even if she doesn’t for one instant suggest someone of German descent. Helen Freeman gives a very stagey if nevertheless effective performance as the calculating housekeeper Fräulein Von Schwertfeger.

The film’s theatrical aspect ratio of 1.37:1 is faithfully rendered in this 1080p transfer using the AVC codec (the main titles are windowboxed). While the movie looks excellent for most of its running time, there are a couple of stray hairs and some slight white and black scratches that crop up occasionally, often near the edges of the frame but occasionally nearer the center. Grayscale is quite admirable with lush black levels and pristine whites, and most of the film is pleasingly sharp except for glamour shots of the star. There is no scene selection in the main menu, but the movie has been divided into 10 chapters.

The DTS-HD Master Audio 2.0 mono sound mix is typical of its era. There seems to be a bit of attenuated hiss early on, but for the most part, there aren’t any age-related artifacts to distract the listener. The dialogue has been nicely recorded for the era, and it’s been mixed very professionally with the classical music and sound effects to make the single track.

Audio Commentary: the chatty commentary by film historian David Del Valle offers paeans to the stars of the film (the tributes to the glory that is Dietrich are repeated quite a few times) and its director but otherwise offers very little else of historical substance.

Kino Trailers: The Blue Angel, Flame of New Orleans, The Spoilers, Pittsburgh, A Foreign Affair, No Highway in the Sky, Love Me Tonight, The Mark of Zorro.

Because it fell between two of her most famous movies Blonde Venus and The Scarlet Empress, Rouben Mamoulian’s The Song of Songs isn’t nearly as well-known as Marlene Dietrich other 1930s films. It deserves to be: it offers the actress a wide-ranging starring role with an appealing leading man and a hissable villain and a stylish production worthy of her more famous efforts with Josef von Sternberg. Recommended!

I've never seen this film but your review has convinced me to fix that. Thanks, Matt!

Andrew Budgell said:
I've never seen this film but your review has convinced me to fix that. Thanks, Matt!
Click to expand...

I hadn't seen it either until today.

If it has Dietrich in the 1930s, that's all I need to know.
You must log in or register to reply here. 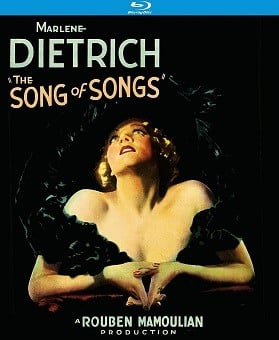