Forum List What's new Dark Style Change width
Log in Register
What's new Search
Menu
Log in
Register
Navigation
Install the app
More options
Dark Style
Close Menu
Posted on May 12, 2019 by Matt Hough
You are using an out of date browser. It may not display this or other websites correctly.
You should upgrade or use an alternative browser.
Engrossing period drama still packs a wallop. 4.5 Stars

A harrowing yet engrossing look at mental illness and its treatment, Anatole Litvak’s The Snake Pit may feature dated and controversial methodology in the treatment of mental disturbances, but its dramatic roots remain firmly grounded and are often quite riveting.

A harrowing yet engrossing look at mental illness and its treatment, Anatole Litvak’s The Snake Pit may feature dated and controversial methodology in the treatment of mental disturbances, but its dramatic roots remain firmly grounded and are often quite riveting. With stunning performances and direction that both jolt and caress the viewer with consummate surety, The Snake Pit remains one of Golden Age Hollywood’s real achievements.

A disoriented Virginia Cunningham (Olivia de Havilland) is confused upon finding herself in what at first appears to be a prison but is in reality Juniper Hill State Hospital, a state mental facility, with no memory of her arrival at the institution. Tormented by delusions and unable to even recognize her husband Robert (Mark Stevens), she is treated by Dr. Mark Kik (Leo Genn) who is determined to get to the root of her mental illness. As her treatment progresses, Virginia makes small inroads into the basis of her psychosis only to plunge again into mental confusion as either Robert, Virginia, or Dr. Kik describe events in Virginia’s life that may have contributed to her instability. Along the path to her recovery, Virginia makes enemies (Nurse Davis – Helen Craig) and friends (fellow patients Ruth and Heather played by Ruth Donnelly and Betsy Blair) as she struggles with learning who to trust among those who surround her.

The Oscar-nominated screenplay by Frank Partos and Millen Brand (based on the novel by Mary Jane Ward) effectively uses flashbacks to set up Virginia’s mental illness as a kind of mystery that must be solved piece by piece. While the solution may strike some as formulaic and predictable, Virginia’s continual befuddlement nevertheless keeps viewers guessing throughout and really engages our own protective feelings toward someone so vulnerable and in such dire need of obvious help. Despite the dated technology and treatment methodologies such as the four shock treatments (with its ominously black electric “juice box”), the hydrotherapy session, and the crowded conditions and harsh treatment of the patients by the nursing staff, we’re never bored and are often appalled by the sights and sounds we’re experiencing (the movie was famous for spurring improvements in state mental care after its successful original release). Anatole Litvak’s direction keeps the film’s secrets close-to-the-vest for quite a long time, but he manages to convey Virginia’s personal story quite nicely balanced with the facts and figures of the overcrowded conditions and the lack of operating funds that typical mental institutions of the time faced. Virginia’s ups and downs through the hospital’s many numbered wards (the lower the number, the healthier the patient: Virginia at one point falls from Ward 1 to Ward 33) are sometimes shocking but always intensely directed by Litvak until we reach her nadir when she finds herself in “the snake pit” surrounded by mostly hopelessly insane inmates writhing around her as Litvak’s camera magnificently rises above the mass in eerily impressive fashion.

While she didn’t win the Oscar for her magnificently nuanced work, Olivia de Havilland did take home honors from the National Board of Review, the New York Film Critics Circle, and Look Magazine. More importantly, she showed great willingness to deglamorize herself, to be both soft and sharp with her diction and mannerisms depending on the necessity, and to forge for herself a fully realized character that would hold her in great stead the following year when she tackled the title role in The Heiress. Leo Genn is the soul of patience and gentility as Dr. Kik, and Mark Stevens as Virginia’s loving but confounded husband achieves a career best for him. Helen Craig is most effective as the harsh, brittle Nurse Davis, and Natalie Schafer matches her as Virginia’s cold and unforgiving mother. Leif Erickson has a couple of very good scenes as Virginia’s first fiancé Gordon, and Glenn Langan strikes his own gentle chord as Dr. Terry. Among the many character stars who effectively cameo as fellow mental patients who surround de Havilland in the various wards are Celeste Holm, Beulah Bondi, Betsy Blair, Lee Patrick, Ruth Donnelly, Katherine Locke, and Jacqueline de Wit.

The film’s theatrical aspect ratio of 1.37:1 is faithfully rendered in this 1080p transfer using the AVC codec. Once again, Fox engineers have done a spiffy job of removing any age-related dirt, scratches, and nicks, and the image is a pristine one. Black levels may not necessarily be the deepest one would wish, but the grayscale is otherwise quite pleasing and contrast has been nicely applied for an engaging viewing experience. The movie has been divided into 24 chapters.

The disc offers DTS-HD Master Audio 2.0 sound mixes in “stereo” (the default) and mono. The second track seems stronger and more faithful to its era with clearer dialogue and punchier sound all around with Alfred Newman’s Oscar-nominated score nicely presented in the mix. Neither track is compromised in the least by any age-related aural artifacts like hiss, crackle, or flutter.

Audio Commentary: film historian Aubrey Solomon offers a decent discussion of the film’s strengths though there are silent patches, and he curiously ignores the contributions some of the character actresses like Lee Patrick and Minna Gombell while mentioning others like Celeste Holm, Beulah Bondi, and Natalie Schafer. It’s worth a listen.

Five Movietone Newsreels (1:04, 1:03, 0:41, 1:18, 0:45; SD): various honors descending on Olivia de Havilland, the film, and other Fox productions from the N.Y. Film Critics, Look and Photoplay, the Academy Awards, and other organizations.

A greatly entertaining  and highly recommended film receives a glorious Blu-ray treatment in Anatole Litvak’s The Snake Pit. There are only 3,000 copies of this Blu-ray available. Those interested in purchasing it should go to either www.twilighttimemovies.com or www.screenarchives.com to see if product is still in stock. Information about the movie can also be found via Facebook at www.facebook.com/twilighttimemovies.

Thanks so much for the terrific review, Matt! This is one of Olivia's finest performances and I can't wait to add it to my collection.

Thanks for the great review as I'm still waiting on Twilight Time to ship me my copy.

Bought this at the Twilight Time sale and looking forward to seeing it.

This is a very good transfer of a very good film. Olivia De Havilland gave an excellent performance but I now take that for granted because she's always good. (Her reputation has probably been enhanced in recent years by the several Blu-ray discs of her films which enable us to see how skilled and versatile she was) I was impressed by Helen Craig and looked her up on IMDB to see what else she was in. Sadly not much, which explains why I didn't recognise her from previous films.

Like others here, I'm a fan of the work of Olivia de Havilland, and having just watched this solid blu-ray I think this is one of her finest roles. The picture quality isn't great, but it's pretty good most of the way. According the RAH the original negative seems to be lost. Anyway, this film has a nuanced portrait of a mental hospital in the late 1940s. Fine direction and a wonderful and sometimes appropriately haunting and moody score by Alfred Newman. According to wikipedia, this film led to some reform: 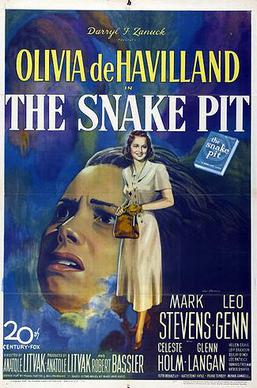 "In 1949, Herb Stein of Daily Variety wrote "Wisconsin is the seventh state to institute reforms in its mental hospitals as a result of The Snake Pit."[15] Publicity releases from 20th Century Fox claimed that twenty-six of the then forty-eight states had enacted reform legislation because of the movie. This is a very difficult claim to verify because few of the bills introduced, regulations changed or funding increases implemented specifically mentioned The Snake Pit as a motivating factor.[15]

I think there were other waves of reform in the 60s and 70s, but starting in the 80s almost all of these places were closed down, and are now ruins. Photographs of these ruins of these former mental hospitals can be found in several places, including this one.... 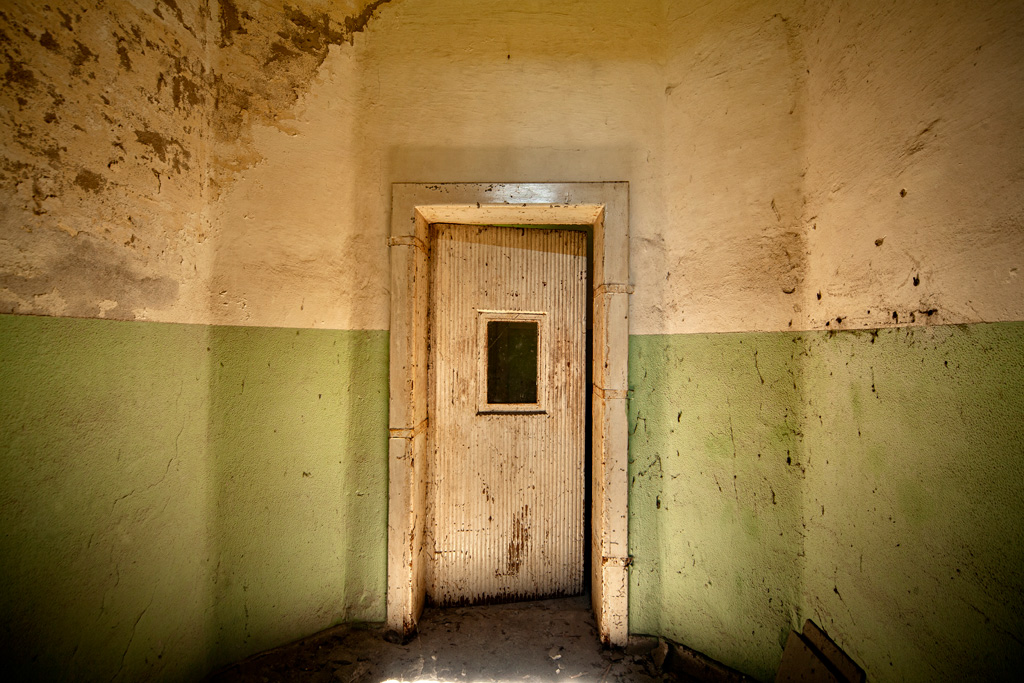 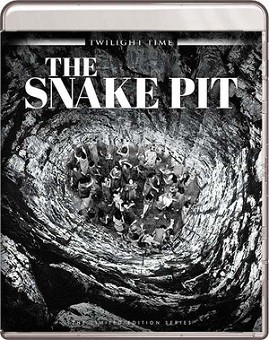