Forum List What's new Dark Style Change width
Log in Register
What's new Search
Menu
Log in
Register
Navigation
Install the app
More options
Dark Style
Close Menu
Posted on January 31, 2021 by t1g3r5fan
You are using an out of date browser. It may not display this or other websites correctly.
You should upgrade or use an alternative browser.
WWII satire debuts on Blu-ray 3.5 Stars

During the 1960’s, Paul Newman had firmly established himself as one the top leading men in Hollywood, a point illustrated with career defining performances in The Hustler (1961), Hud (1963) and Butch Cassidy and the Sundance Kid (1969). The decade also saw him go into some more lighter fare, of which The Secret War of Harry Frigg was among these efforts. Previously released on MOD DVD by Universal, Kino has picked up the movie for it’s Blu-ray debut.

During the height of WWII, five Allied generals are captured in Tunisia at a Turkish bathhouse, resulting in a public relations nightmare for the Allied forces. Hoping to save face and recover the generals at the same time, Army Brigadier General Homer Prentiss (James Gregory) recruits Private Harry Frigg (Paul Newman) – who has a history of escaping stockades – to infiltrate the Italian villa where the five are held captive in exchange for a promotion. While Harry does find a way to escape, he’s sidetracked by a blossoming romance with an Italian countess (Sylva Koscina); can he keep his mind on business long enough to form an escape plan or has he finally found one prison he can’t escape from?

The Secret War of Harry Frigg stands out as an odd duck in the career of Paul Newman, as it has several pros and cons going for it in the process. For example, Newman does a good job of channeling his Cool Hand Luke persona into the titular character; having already played a couple of antiheroes already during the decade, it’s not too surprising in that respect. Director Jack Smight is also very sure handed in his direction, making sure the plot moves along nicely without plodding too much. The real Achilles heel with the movie here is that quite a few of the jokes don’t really hit their mark despite some spirited performances; perhaps that’s likely due to the script (by Peter Stone and Frank Tarloff) not quite finding the right mix of comedy and action to pull off the satire successfully and do full justice to the game cast. Despite those flaws, The Secret War of Harry Frigg is still an agreeable and mildly entertaining little movie to help pass the time on a lazy weekend; it’s OK, but it could’ve been better.

As mentioned earlier, Newman does a good job with the title role, but it would be sacrilege to pass over the contributions of a solid cast of supporting players. As the Army general who sends Harry behind enemy lines, James Gregory makes the most of his time; you’ll more likely remember him as either the McCarthy-esque US Senator John Iselin in The Manchurian Candidate (1962) or as the crusty Inspector Luger from TV’s Barney Miller. Vito Scotti is a delight as the benevolent Colonel Ferrucci tasked with the welfare and captivity of the generals; Sylva Koscina brings the glamour as the Italian countess whose villa doubles as a posh POW prison for the generals. The five captive Allied generals are represented by Andrew Duggan, John Williams (not the composer), Tom Bosley, Charles Gray and Jacques Roux; Gray is notable as being one of the very few actors to play both an arch villain (Diamonds Are Forever) and ally (You Only Live Twice) of James Bond in the ongoing film franchise while Bosley would become recognizable as Howard Cunningham in TV’s Happy Days. Rounding out the cast here include Norman Fell (the future Mr. Roper) as a skeptical Army captain, Werner Peters as the icy German major who may just thwart Harry’s plans for escape, Fabrizio Mioni and Johnny Haymer as Col. Ferrucci’s officers stationed with him at the villa/prison camp and a brief appearance by Buck Henry as the commandant of the stockade Harry tries to break out of when he’s eventually recruited for the job.

The film is presented in its original 2:35:1 aspect ratio for this release. Film grain is organic, with fine details and color palette both given a faithful representation; there’s minimal cases of vertical lines, dirt, scratches or tears present here. Overall, this is likely the best the movie will ever look on home video.

The film’s original mono soundtrack is presented on a DTS-HD Master Audio track for this release. Dialogue is both strong and clear, with Carlo Rustichelli’s score and the sound mix also given faithful presentations as well; there’s hardly an instance of distortion, dropout, hissing or crackling present here. This is by far the best the movie will ever sound on home video.

Commentary by film historian/filmmaker Daniel Kremer & film historian/biographer Nat Segaloff – Recorded for this release, the duo offer up a defense of the movie as well as some of the background on the production and bios on the cast and crew.

Though not quite showing him at his absolute best, The Secret War of Harry Frigg still showcases Paul Newman during the height of his stardom and gave him a chance to show off some comedic chops that would serve him well later on in his career. Kino continues its run of providing quality Blu-ray releases here with a strong HD transfer and an informative and entertaining commentary as a supplement. Recommended for fans of the actor and worth upgrading from the MOD DVD.

Seeing this film once was enough for me, in fact probably once was one time too many.
You must log in or register to reply here.

Bend of the River – Blu-ray Review 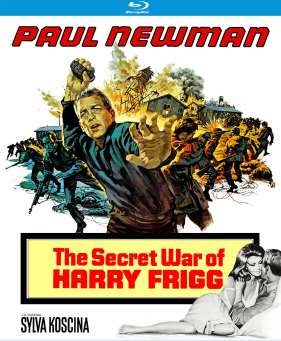