A bit overstuffed but enjoyable 4 Stars

The Secret Life of Pets 2 often feels like several short stories that eventually merge together in a film that this reviewer found, ultimately, more enjoyable than the first.

The Secret Life of Pets 2 picks up where the previous entry left off, with Max (now voiced by Patton Oswalt) and Duke (Eric Stonestreet) enjoying life in Manhattan with human companion Katie (Ellie Kemper). That is, until Katie brings home a husband, Chuck (Pete Holmes) and eventually a baby, Liam (Henry Lynch). At first, Max and Duke aren’t sure what to make out of this small human, as Liam terrorizes the dogs (as babies often do) by throwing toys, pulling ears, chasing, etc. Until one day, Max and Liam bond and become best pals, with Max becoming over-protective and developing a nervous itching condition, prompting a trip to the vet to get fitted for a cone of shame.

As they prepare for a family trip out to Uncle Shep’s farm, Max entrusts his favorite toy, Busy Bee, to neighbor Pomeranian Gidget (Jenny Slate) to watch. Shortly after Max leaves, Gidget loses Busy Bee to an apartment full of feral cats. Desperate to get Busy Bee back, Gidget goes to neighboring passive-aggressive cat Chloe (Lake Bell), who trains Gidget on how to act like a cat.

Meanwhile, bunny Snowball (Kevin Hart) now fancies himself a superhero due to his owner dressing him in costumes, and he’s off to rescue a white tiger from an abusive circus trainer with help from Shih Tzu Daisy (Tiffany Haddish). Back at the farm, Max and Duke meet Welsh Sheepdog Rooster (Harrison Ford), who is not all that keen to have city dogs on his farm, especially when Max accidentally lets a baby sheep, Cotton (Sean Giambrone), out of his pen to wander out into the woods. This becomes a courage-building lesson for Max, who uses this new-found skill to tie up all of the subplots during the third act.

Although I enjoyed The Secret Life of Pets 2 a bit more than the first film, this second outing feels a bit overstuffed in subplots, trying to give many of the fans’ favorite characters their own little adventure and then tries to shoehorn them all into one rousing conclusion. Max’s adventures on the farm were fun, and Harrison Ford delivers some great lines as he tries to put up with the city dwellers. Gidget’s adventure is also fun, as she tries to learn how to be a cat (with Lake Bell’s passive-aggressive Chloe nearly stealing every scene she appears in) and ultimately rescue and take charge of the ferals. I still found Kevin Hart’s Snowball to be irritating and would have preferred that he either be toned down or his part reduced.

Universal’s Blu-ray edition of The Secret life of Pets 2 is stunning. The 1080p AVC-encoded transfer presents the film in its theatrical aspect ratio of 1.85:1 with vivid colors with no evidence of banding or blooming. Detail is excellent, from the individual strands of fur, textures of skin on the dogs’ noses, blades of grass, to random leaves and cracks in the sidewalk. Contrast is superb with deep blacks and strong shadow detail with no evidence of crushing as well as bright whites that never clip. I found no evidence of any compression artifacts whatsoever.

Universal has included a Dolby Atmos track on the Blu-ray release (which is backwards compatible to Dolby TrueHD 7.1). The track uses the Atmos capability rather subtly, with a few discrete sounds here and there, but mostly uses the heights to extend and expand the music and atmospherics. Surrounds are very active when necessary (such as the chase sequence though the circus), and LFE is strong, adding a solid low-end to many of the pop songs featured in the film. Dialogue is clear and understandable throughout.

Super Gidget (1080p; 3:49): Gidget goes on an adventure to save Max from an evil band of squirrels. Presented with Dolby Digital 5.1 audio encoded at 640 kbps.

Minion Scouts (1080p; 4:04): Jealous of the badges Margo, Agnes and Edith earned at Badger Scouts camp, minions Stuart, Kevin, Bob and Dave sign up to try and earn their own badges. Presented with Dolby Digital 5.1 audio encoded at 640 kbps.

The Making of the Mini-Movies (1080p; 4:59): The directors of Super Gidget and Minion Scouts discuss making the movies.

Frame by Frame – How to Make a Flip Book (1080p; 4:25): As the title suggests, Head of Story Eric Favela shows the viewer how to make their own flip book.

Pets with Jobs – A Documentary (1080p; 7:10): A look at how various animals help humans by being more than just pets.

Relax the Cat: The Secret Life of Pet Massage (1080p; 4:21): Dana Carvey, Bobby Moynihan and Lake Bell are joined by pet massage therapist Amber Lockspeiser, as they demonstrate how to properly massage your pet.

Digital Copy: An insert contains a code to redeem a digital copy  on Movies Anywhere.

UPHE Rewards Code: On the flip side of the Movies Anywhere code is a code to redeem a free digital movie from a selection of six different films. As of this review, some of the selections included the 1931 classics Frankenstein and Dracula.

This reviewer found this second outing slightly more enjoyable than the first.  Universal’s presentation on Blu-ray is excellent, with some fun special features thrown in. 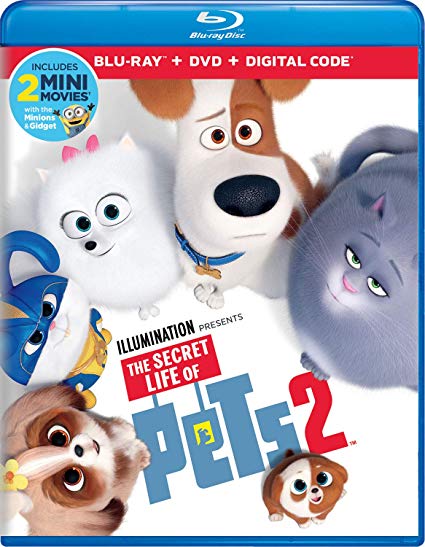