Yet another adaptation of the classic novel 4 Stars

Universal brings the STX and StudioCanal 2020 co-production of The Secret Garden to Blu-ray after its brief VOD release.

Checking on IMDB, it appears that The Secret Garden, based on the classic novel written by Frances Hodgson Burnett and published in 1911, has been adapted multiple times as both movies (the first in 1919, believed to be lost) and TV miniseries or movies, some less than a year apart (American Zoetrope’s theatrical film was released in 1993 while an ABC animated TV movie aired in 1994). The year 2020 brings us yet another adaptation “From the producers of Harry Potter and Paddington” and directed by Marc Munden (better known for directing episodes of Black Sails and National Treasure). The film features Colin Firth as Lord Craven (Firth also played the adult Colin Craven in the 1987 Hallmark Hall of Fame TV movie), Julie Walters as housekeeper Mrs. Medlock, and newcomer Dixie Egerickx as orphan Mary Lennox.

This new adaptation moves the timeline to post World War II, but still follows the same story of Mary being orphaned in India and sent to live with her uncle, Lord Craven, at his Misselthwaite Manor in England. Mrs. Medlock greets Mary at the train station and escorts her to her new home, cautioning her to not explore the house, only speak to Lord Craven when spoken to, and last but not least, do not stare at him. Lord Craven is something of a recluse, holing himself up in his manor and isolating himself and his son Colin (Edan Hayhurst) after his wife died several years ago. Bored and seeking adventure, Mary wanders off and discovers a secret and magical garden full of beauty that has been hidden by overgrown ivy along the garden’s high fence. She also encounters on the manor and befriends Dickon (Amir Wilson) who is the younger brother of house servant Martha (Isis Davis) and Lord Craven’s invalid son Colin (Edan Hayhurst), exploring the magical garden with them, discovering its healing properties.

I may have seen the 1993 movie adaptation of The Secret Garden, but must confess that I don’t remember it all too well. I also never read the source novel. Director Marc Munden’s adaptation is certainly beautiful to look at, but it tends to drag in several spots, and its pacing may be too slow for its intended young audience, despite its winning performances by its cast.

Universal’s track record of excellent-looking Blu-ray releases continues with The Secret Garden, although this title is available in 4K digital. Detail is exceptional, revealing subtle textures in fabrics, peeling paint on the walls of Misselthwaite Manor, facial features, etc. Colors are vibrant, especially once we enter the secret garden, yet never appearing overly saturated. Contrast is also excellent, with deep blacks that show minimal crushing and shadow details.

The DTS-HD MA 5.1 track is quite good, until you realize that the 4K digital release includes a Dolby Atmos track. While the Atmos track does add some quite remarkable atmospherics inside the garden, the lossless 5.1 track on Blu-ray is no slouch. The track provides excellent stereo separation across the fronts with active surrounds that come very close to accomplishing the immersive feeling that the Atmos delivers on. Dialogue is clear and understandable throughout.

Digital Copy: An insert contains a code to redeem a digital copy (in UHD!) on iTunes/Apple TV.

The latest film adaptation of The Secret Garden is beautiful cinematically, but its pacing may be too slow for most modern family audiences. 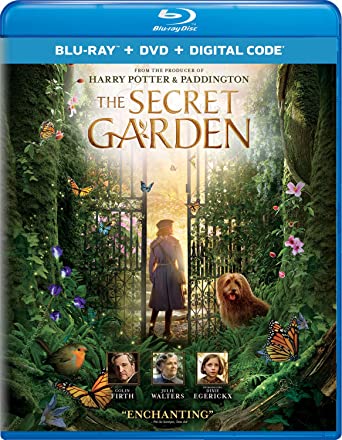