The Sea Chase, one of two John Wayne films to be released on Blu-ray by the Warner Archive this month, is a strange one. For one thing, it is difficult to wrap one’s head around the idea of Wayne portraying a German (albeit an anti-Nazi German) captain of a freighter at the outset of World War II. For another, with the exception of Lyle Bettger, the formidable cast is devoid of actors who look or sound like Germans. Nevertheless, it is well-made and contains enough action to keep viewers entertained.

The Sea Chase, one of two John Wayne films to be released on Blu-ray by the Warner Archive this month, is a strange one. For one thing, it is difficult to wrap one’s head around the idea of Wayne portraying a German (albeit an anti-Nazi German) captain of a freighter at the outset of World War II. For another, with the exception of Lyle Bettger, the formidable cast is devoid of actors who look or sound like Germans. Nevertheless, it is well-made and contains enough action to keep viewers entertained.

In September 1939 Captain Karl Ehrlich (Wayne), the skipper of the rusty German tramp steamer “Ergenstrasse,” is stuck in port at Sydney, Australia. His ship is low on coal and the Australian government will not give him clearance to set sail. The war clouds have been growing darker and Ehrlich fears that he and his crew will be interred in Australia and forced to sit out the inevitable conflict.

Ehrlich is paid a visit aboard his ship by an old friend, the British Navy Commander Jeff Napier (David Farrar), who is engaged to a woman in England but has fallen for a German woman named Elsa Keller (Lana Turner). Ehrlich had been the commanding officer of a German cruiser but was relieved of his command because of his outspoken opposition to the Nazis. When he meets Elsa, he immediately recognizes her as a woman with a reputation for getting close to British officers and then leaving them. He threatens to expose her to Napier unless she breaks off the relationship herself.

Ehrilich’s Chief Officer Kirchner (Bettger) is with German Naval Intelligence and is waiting to be transferred back to Berlin. Ehrlich has other plans. He has decided to attempt to slip out of Sydney Harbor under the cover of heavy fog and make his way to Yokohama, where he assumes that he will be able to get fuel and provisions from Germany’s Japanese allies. When he gets ready to get underway that evening, he is paid a visit by the German Consul, who informs him that he will be taking along a passenger – none other than Elsa Keller, who is actually a German spy. When it is learned that the “Ergenstrasse” has gotten away, Napier’s ship is given orders to catch up to Ehrlich and have the “Ergensterasse” returned to Sydney.

During the arduous sea voyage that follows, Elsa’s luxurious blonde hair remains impervious to the elements. The supporting cast is full of capable, well-known names such as Tab Hunter, Alan Hale Jr., Claude Akins (billed as Claude Akin), and James Arness (who was then under contract to Wayne’s production company, Wayne-Fellows, which had a financing and releasing deal with Warner Brothers). However, under the direction of John Farrow none of them (other than Bettger) would be mistaken for Germans if put into an entirely different film.

The screenplay is credited to James Warner Bellah and John Twist, but reportedly a total of five writers worked on it. Wayne biographer Scott Eyman says that Wayne was never entirely satisfied with the script, and Tab Hunter feels that there was little chemistry between the star and Lana Turner. Wayne later complained that Farrow “took a great story and made a dime novel spy story,” and Hunter claims that the director was distracted by his efforts (presumably unsuccessful) to seduce Turner. Still, The Sea Chase is a well-produced naval adventure, its authenticity greatly enhanced by five weeks of location filming in Hawaii.

Trivia note: the film includes narration by David Farrar as Commander Napier, and after the “Ergenstrasse” changes direction and heads for Auckland Island, the screenplay requires him to say that it would have been dangerous for the freighter to proceed westward to the Pacific or eastward to the Indian Ocean. As a former sailor I did not have to consult a map to know that from Australia and New Zealand the Pacific is to the east and the Indian Ocean is to the west.

The Sea Chase is an early CinemaScope production which was filmed in the oftentimes problematic WarnerColor. This Blu-ray release, which is presented in 1080p via the AVC codec, is properly framed at 2.55:1 and looks very good. The colors have been preserved quite nicely, contrast is solid, and shadow detail is satisfactory. The overall image will not blow anyone away, but I would guess that this is as close as this will look to how it appeared in theaters more than sixty years ago.

I recommend that readers also take a look at the comments by our resident expert, the estimable Robert A. Harris:

The audio is DTS HD-MA 2.0 stereo, and it is very good. Mr. Harris explains that the method used to process the audio on this Blu-ray release is not optimal but the difference between it and optimal is not significant, either. Suffice it to say that dialogue is clear, the score by Roy Webb has excellent fidelity, and the sounds of the sea and the ship’s engine room are quite realistic.

The only extra is the film’s theatrical trailer, which has some specks but otherwise is in good shape. “The oceans boil with the fury of the mighty sea hunt.”

The Sea Chase is not one of John Wayne’s better films, but it is sufficiently entertaining to warrant a recommendation, particularly for his fans. It can be found at Amazon or at the Warner Archive website. 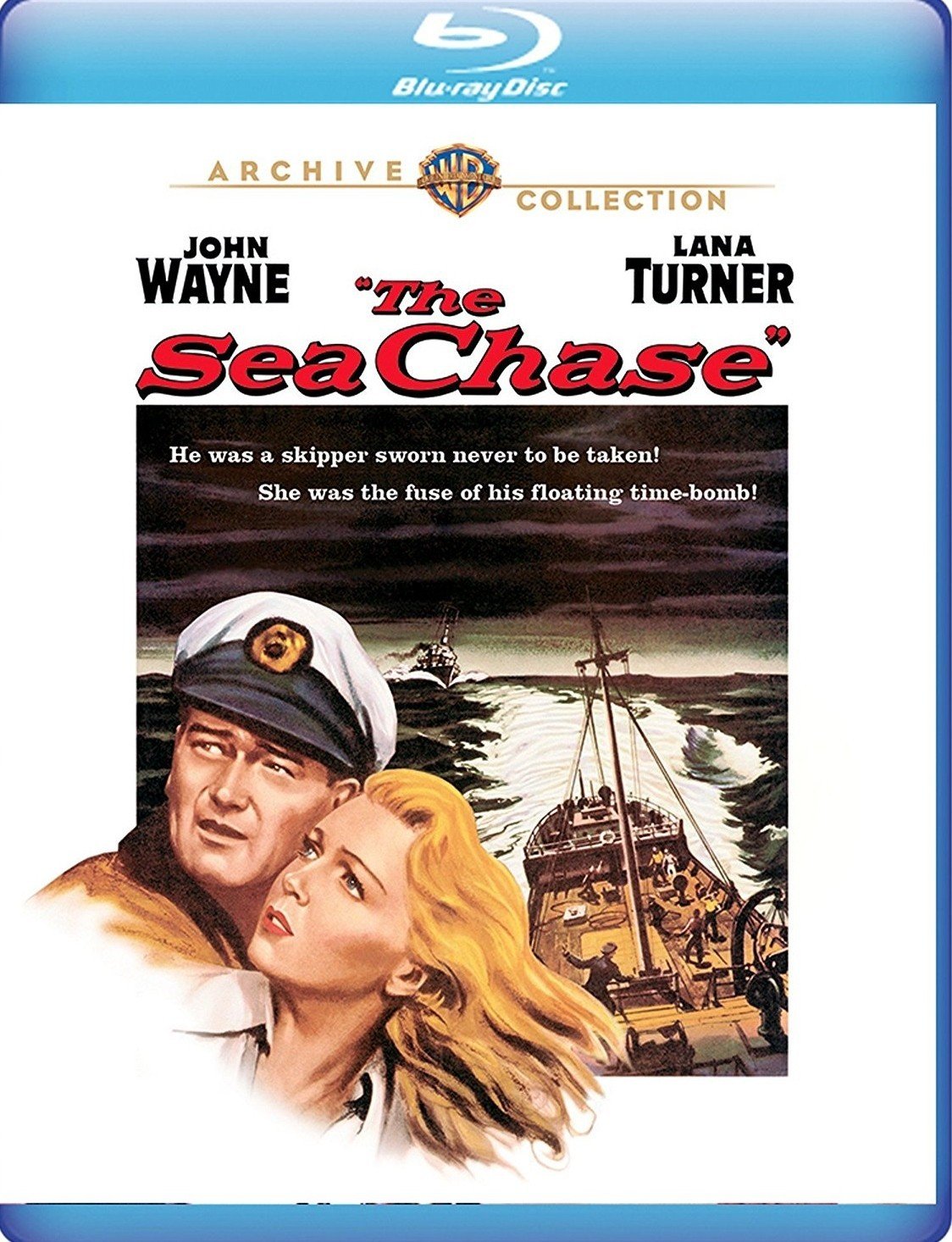