Forum List What's new Dark Style Change width
Log in Register
What's new Search
Menu
Log in
Register
Navigation
Install the app
More options
Dark Style
Close Menu
Posted on January 3, 2021 by t1g3r5fan
You are using an out of date browser. It may not display this or other websites correctly.
You should upgrade or use an alternative browser.
Three Rock Hudson adventures debut on Blu 3.5 Stars

One of the most preeminent faces in the latter years of the Golden Age of Hollywood, Rock Hudson first rose to stardom in the movies of director Douglas Sirk, with his appearance in Magnificent Obsession (1954) affirming that status; today, he’s best known for the three romantic comedies he made with Doris Day, starting with Pillow Talk (1959) as well as earning his lone Oscar nomination for his performance in the George Stevens epic Giant (1956). Kino has assembled three adventure movies from his pre-stardom days for this release – ranging from a Florida Western (Seminole) to an Arabian Nights fantasy (The Golden Blade) and a British Raj adventure (Bengal Brigade) – all making their debut on Blu-ray here.

In the Florida Territory in 1835, US Army Lieutenant Lance Caldwell (Hudson) is stationed at Fort King and tasked with maintaining a fragile peace between the settlers and the Seminole Indians. However, that peace is threatened by factions in the Seminole tribe between Chief Osceola (Anthony Quinn) and his second in command Kajeck (Hugh O’Brian) as well as Caldwell’s warmongering commanding officer, Major Harlan Degan (Richard Carlson). Caught in the middle of it all, Caldwell does his best to prevent an all out war from breaking out, but when Osceola dies, Caldwell finds himself facing both a court martial and a potential death sentence for defying Degan and doing what’s right…

Director Budd Boetticher is better known for his collaborations with Western icon Randolph Scott later on in the 1950’s, but Seminole is one of his better efforts outside of that famed partnership. Depicting the Second Seminole War (1835-1842), the movie takes a straightforward and realistic approach in depicting not only the Seminole Indians in a realistic and sympathetic light, but also the US Calvary and some of the flaws in their strategy in the conflict in a realistic way as well; Major Degan here is based off of the real life General Thomas Jesup, whose name wasn’t used in the film to avoid opening up the studio to a potential lawsuit from Jesup’s surviving relatives. Hudson, in one of his early leading roles, acquits himself well as does Quinn (who seemingly made a career out of portraying many men of different nationalities), Carlson and leading lady Barbara Hale; however, seeing Hugh O’Brian portray a Seminole is certain to be jarring to modern viewers who are familiar with the controversy of casting white actors in non-white roles. In the subgenre of the Florida Western, Seminole might just be the best movie in the category for its frank and honest depiction of the Seminole Indians and a underrated film in the careers of both director and star.

In Ancient Bagdad, a warring conflict threatens the peace of both the cities of Bagdad and Basra; when his father dies in conflict, Harun al-Rashid (Hudson) vows to both avenge his death and bring peace to the land. Upon arriving in Bagdad, he comes across a golden sword in a shop with the ability to cut through solid metal among other surprises. The sword will soon come in handy as Harun soon finds himself not only fighting for the hand of the Caliph’s daughter Khairuzan (Piper Laurie) but also against the nefarious Jafar (George Macready) and his equally scheming son (Gene Evans); the fate of both Bagdad and Basra rests upon the mythical sword Harun carries.

Universal was no stranger to the exotic adventure genre (they had already made several going back to 1942’s Arabian Nights – which was the studio’s first three strip Technicolor film), but The Golden Blade adds a new twist to the formula. Under the direction of former production designer Nathan Juran, the story follows the Arabian Nights fairy tales buts adds in an element from the legends of King Arthur (specifically The Sword in the Stone). The new wrinkle alone makes this one stand out among other Universal exotic adventures, but the spirited performances from the cast – especially Hudson, Laurie, Macready and Steven Geray (Evans looks a little out of place here)- help to make this one of the most entertaining excursions from the studio in this subgenre. In short, The Golden Blade is a fun and entertaining little romp through Ancient Bagdad and serves as another step for Hudson towards achieving stardom.

During the Indian Mutiny in 1857, Captain Jeffrey Claybourne (Hudson) is disciplined for disobeying orders during a disastrously doomed attack on the rebel Sepoys in one battle. Feeling himself unworthy of both the love of his fiancée (Arlene Dahl) – the daughter of Col. Morrow (Torin Thatcher) – as well as service in the Bengal Lancers, Claybourne decides to resign his post. However, during his self-imposed exile he soon learns that the local rajah is secretly aiding the anti-colonial rebels and plotting a massive counterattack against his former servicemen. It’s here that Claybourne decides to return to not only help his fellow brothers in arms but also prove that he’s truly worthy of not just his fiancée’s love, but the redemption he has sought.

Released shortly after his star making turn in Douglas Sirk’s Magnificent Obsession, Bengal Brigade saw Hudson return to the adventure genre where he paid his dues on his way to the top. Director Laslo Benedek (The Wild One) does a solid job of setting up and executing the action sequences, but the film tends to plod outside of them – in short, the plot gets bogged down in lengthy and talky sequences that never quite send the movie into the next gear. While Hudson is a solid lead, he does appear to be a bit out of place as a British solider; cast members Dan O’Herlihy, Torin Thatcher and Arnold Moss seem to get the more meatier moments to shine. In conclusion, Bengal Brigade has an interesting story and set up, but has a jumbled execution that produces a very uneven film that alternates from exciting to blasé; it’s OK, but it should have been much better.

Seminole and The Golden Blade are presented in their original 1:37:1 aspect ratios while Bengal Brigade is presented in its original 1:85:1 aspect ratio for this release. All three films exhibit a faithful representation of film grain, fine details and color palette; there’s slight issues with fringing on Seminole and The Golden Blade (both movies were shot in three strip Technicolor), but they’re fairly minor and not distracting. Other than that, there’s also minimal issues like dirt, dust, tears or scratches present here, meaning that all three films are likely the best they’ll ever look on home video.

The original mono soundtracks for all three films are presented on separate DTS-HD Master Audio tracks for this release. Dialogue is strong and clear on all three films, with sound effects and music scores (an uncredited Henry Mancini and Milton Rosen for Seminole, the uncredited combo of Irving Gertz, Henry Mancini and Herman Stein for The Golden Blade and Hans J. Salter with uncredited contributions from Herman Stein and Stanley Wilson on Bengal Brigade) on each film given faithful representations and presentations. Problems like distortion, crackling or hissing are kept to a bare minimum here, which means that this release likely is the best all three movies will ever sound on home video.

Commentary by film critic Nick Pinkerton – Recorded for this release, Pinkerton talks about the movie as well as some of the attributes in portraying Native Americans in a sympathetic light.

Commentary by film historian Phillipa Berry – Recorded for this release, Berry talks about the film’s production, cast and crew and its place in the studio’s tradition of exotic adventures; the only downside is you’ll have to turn up the volume since the track barely overrides the soundtrack.

The three films here in the Rock Hudson Collection show an actor both showing potential as a leading man as well as having just arrived at stardom – each with different results. Kino continues its solid run here with good HD transfers as well as offering two new commentary tracks on two out of the three titles. Highly recommended for fans of the actor and worth upgrading from previous DVD releases.

Thanks for the review. My favourite early Rock Hudson film is the charming comedy 'Has Anybody Seen My Gal', 1952 directed by Sirk. Really hope that KL will release this.
You must log in or register to reply here.

Today at 11:57 AM
Kino Lorber Insider 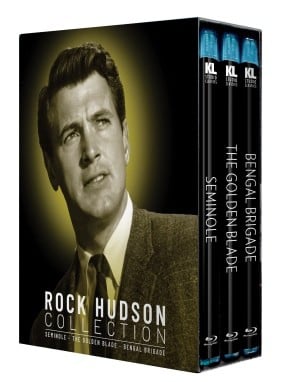