Henry Fonda is back in The Return Of Frank James, which picks off from where Twentieth Century Fox’s 1939 smash hit left off. Though the film is not historically accurate (nor was its predecessor), it’s an enormously entertaining film held together by Fonda’s strong leading performance.

The Return Of Frank James picks up immediately where 1939’s Jesse James leaves us: with Jesse (Tyrone Power) dead by Bob Ford’s (John Carradine) cowardly hands. As the film begins, Jesse’s brother Frank (Henry Fonda) is on the run from the climactic bank robbery gone wrong that ends the original film. Hoping to meet up with Jesse, Frank soon finds out that his brother’s life was taken by Ford, and sets out for revenge against Bob Ford and his brother Charlie Ford (Charles Tannen). Traveling with Frank is his sidekick Clem (Jackie Cooper, friendly as ever). What starts out as a simple revenge quest becomes more complicated when Frank meets a reporter named Eleanor (Gene Tierney, radiant in her screen debut) who sees Frank as being worth more than his life of crime would suggest. Frank finds himself torn between his desire to be with Eleanor and his need for vengeance. When Frank’s friend Pinky (Ernest Whitman) is arrested and scheduled be hanged for something that Frank did, though, Frank realizes that he cannot allow an innocent man to hang in his place, even if that means his own fate will be at risk.

The Return Of Frank James is almost entirely inaccurate, historically speaking, and yet, none of that matters. Neither this film, nor its original, were intended to be the definitive telling of the story; rather, they were meant to be crowd-pleasers that could draw an audience by riffing on popular figures. Setting aside the history, both films are remarkably entertaining, twisting circumstances so that the popular outlaws are unambiguously the heroes of these stories. But with Henry Fonda in front of the camera and director Fritz Lang behind it, the lack of accuracy matters not one bit. Both are at the top of their game here, with Lang getting tremendous performances from his cast, and beautiful shots from his cinematographer, George Barnes.

While The Return Of Frank James is clearly the sequel to Jesse James, Fonda’s performance here also seems to build on his work as the titular character in the previous year’s Young Abraham Lincoln, bringing his own sense of moral decency to a film ostensibly about a gunslinging outlaw. Fonda’s Frank James is so decent a man that not only will he not allow the innocent Pinky to hang, but he won’t even tolerate the suggestion from Clem that Pinky’s life is worth less than their own because Pinky happens to be a “darkie.” While this sort of moral clarity might have been anathema to the real Frank James, it’s absolutely essential to what Henry Fonda, and a great many of the characters he played, stood for.

The Return Of Frank James is presented in its original aspect ratio of 1.37:1. Though Fox discarded the original three strip Technicolor elements for the overwhelming majority of their color productions from this time period, leaving behind only poor quality representations of what those films originally looked like, somehow a miracle has occurred with this title. The Return Of Frank James is, simply put, the best looking home video presentation of a Twentieth Century Fox Technicolor title that I have ever seen. Color is strong and pleasing, with an overall image that’s sharp, stable and clean of any dirt or debris. Shadow detail is present and black crush is minimal.

Two audio options are present on the disc, both in the DTS-HD MA lossless format: a 1.0 monaural track that is the film’s original audio, and a 2.0 fake stereo track that was created for a prior home video release. The 1.0 monaural track is the preferred option. It has a very slight hiss that appears on rare occasions, but is otherwise fine, with dialogue clearly discernible in the mix and sound effects and music well balanced. By comparison, the 2.0 fake stereo track doesn’t offer much separation, and has a slightly thinner, weaker quality to it.

The Return Of Frank James is a wonderfully entertaining, if historically inaccurate, follow-up to 1939’s Jesse James. Twilight Time’s Blu-ray release, while essentially bare of any special features, is nonetheless a revelation, with a gorgeous presentation that is the best that any of Fox’s Technicolor films have looked on home video.

Josh, excellent review and glad to know this particular title escaped Fox Eastman hell somehow. More Gene Tierney on Blu-ray is always a good thing and Henry Fonda's not too bad either.

It was during an early 1980s TVO Saturday Night At The Movies presentation of this film and its predecessor, JESSE JAMES (1939), that I first learned about 20th Century Fox having dumped the original Technicolor film elements, which was then thought to encompass their entire Technicolor film library. How fantastic that THE RETURN OF FRANK JAMES (1940) apparently escaped that ignominious fate!

Don’t get me wrong - Frank James also had its negatives dumped. But the single strip backup they made was apparently much better on this one than most. It’s not a perfect representation of the original look but it’s much closer than most of the other Fox titles of this time.
Reactions: Robert Crawford and Tony Bensley

Josh Steinberg said:
Don’t get me wrong - Frank James also had its negatives dumped. But the single strip backup they made was apparently much better on this one than most. It’s not a perfect representation of the original look but it’s much closer than most of the other Fox titles of this time.
Click to expand... 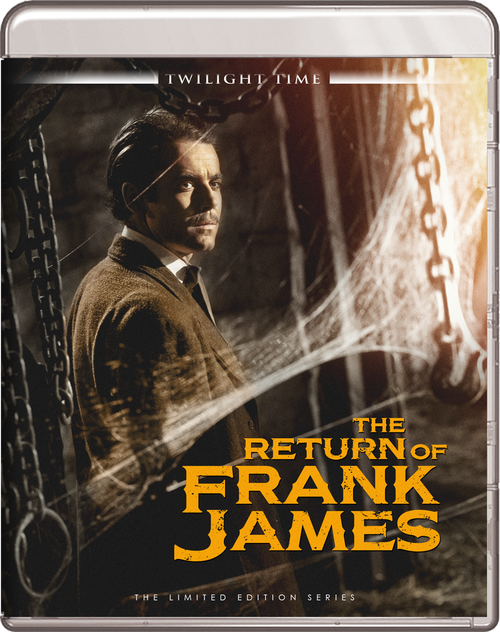