Forum List What's new Dark Style Change width
Log in Register
What's new Search
Menu
Log in
Register
Navigation
Install the app
More options
Dark Style
Close Menu
Posted on October 6, 2019 by t1g3r5fan
You are using an out of date browser. It may not display this or other websites correctly.
You should upgrade or use an alternative browser.
Hammer chiller debuts on US Blu-ray 3.5 Stars

During the mid 1960’s, Hammer tried an experiment: film four movies back to back and distribute them in a pair of twin bill packages for theaters. One of the films, The Reptile, was filmed back to back with The Plague of the Zombies and distributed with Rasputin: The Mad Monk; here, the movie has a slightly more modern setting than Plague but still adheres to the Gothic style the studio was known for. Previously released on DVD by Anchor Bay here in the US, Shout Factory – via the Scream label – has picked the film for its Blu-ray debut here.

In a small Cornish village at the turn of the 20th Century, a series of gruesome and mysterious deaths plague the town and have the villagers living in fear. When Harry George Spalding (Ray Barrett) and his wife Valerie (Jennifer Daniel) arrive to move into the cottage left to them by Harry’s recently deceased brother, they find themselves embroiled in the horrific mystery. They soon find out about a mysterious doctor (Noel Willman) and his daughter (Jacqueline Pearce) that may be the key to unraveling this mystery, but what they discover is something that’s too shocking for words!

Presented as the “B” feature on a double bill with Rasputin: The Mad Monk, The Reptile stands out on its own a strikingly moody little chiller. Using some of the same settings as The Plague of the Zombies, the movie here also adheres to some of the mysterious qualities of that film while bringing a few of its own. For instance, the manner in which each of the victims die has to be the most gruesome and horrifying in the entire Hammer oeuvre, something along the lines of a combination of the Black Death and rabies. There’s really not much in terms of major complaints here, which makes The Reptile as one of the Hammer studios most intriguing movies to be released during the 1960’s.

Ray Barrett is a serviceable if somewhat bland leading man; Jennifer Daniel fits the “Hammer Glamour” mold as the wife of our hero. Interestingly, one of the more compelling performances here is Noel Willman’s Dr. Franklyn, an aptly mysterious man who harbors a dark secret about his past; the other compelling performance is that of Jacqueline Pearce as Dr. Franklyn’s daughter Anna, who may be the reason for many of the mysterious events that occur. Also making notable impressions are Hammer regular Michael Ripper as the village publican who befriends the new couple, John Laurie as the village eccentric who falls victim to the mysterious plague, Marne Maitland as the doctor’s silent servant who also plays a role in the strange events, Charles Lloyd Pack as the village vicar, Harold Goldblatt as a solicitor, and David Baron as the brother who first succumbs to a horrible death at the beginning of the film.

The film is presented in two aspect ratios – 1:85:1 (the default option) and 1:66:1 – on this release, with an HD transfer likely taken from Studio Canal’s previous Region B Blu-ray release. Both versions have a healthy amount of film grain with fine details and colors rendered faithfully as well. There are some spots of softness – mostly during the opening credits – but not enough to distract from viewing; other than that, there not much in terms of problems with the transfer itself (print damage, scratches, dirt, etc.). The transfer itself is likely the best the film will ever look on home video, but if you have a preference on which aspect ratio to view the film in, the 1:66:1 open matte version is the way to go, given there’s more information shown than the 1:85:1 version.

The original mono soundtrack is presented on a DTS-HD Master Audio track for this release. Dialogue is strong and clear along with the sound effects, and Don Banks’ brooding score has great ambiance, fidelity and direction given to it. Instances of crackling, popping, hissing or distortion is hardly present, which means that this is likely the best the film has ever sounded on home video.

Commentary by author/film historian Steve Haberman, & filmmakers/film historians Ted Newsom & Constantine Nasr – Newly recorded for this release, this commentary goes over the film’s production history as well as some interesting tidbits about the cast and crew involved; as always with this trio, it’s interesting, insightful, and entertaining to listen to.

Interview with 1st Assistant Director William P. Cartlidge (21:39) – The first assistant director talks about the movie and his association with Hammer Films in this brand new interview.

The Serpent’s Tale (22:45) – Carried over from Studio Canal’s 2012 Region B release, this featurette goes over the movie and its history; among those interviewed include film historians Marcus Hearn, Mark Gatiss, Jonathan Rigby, David Huckvale, and Wayne Kinsey, art director Don Mingaye, and restoration supervisor Jon Mann.

World of Hammer episode “Wicked Women” (24:52) – This episode from the 1990 series highlights some of the wicked women of the Hammer movies.

Theatrical Trailers (6:33) – Four trailers are presented here: the original UK trailer, the UK double bill with Rasputin: The Mad Monk, the US double bill trailer, and a black-and-white double bill.

While it was presented as the ‘B’ feature, The Reptile has stood out as a chilling feature that’s been overlooked in the larger Hammer repertoire. Shout continues its run of releasing Hammer Horror with a strong presentation with two aspect ratio options to go with a strong audio presentation as well as a decent slate of special features. Recommended for fans of Hammer Films and horror movie in general.

Great review.
I watched this recently and thought it was near the top of the Hammer horror films. Gothic horror, both atmospheric, and suspenseful. I loved every second of it.
You must log in or register to reply here. 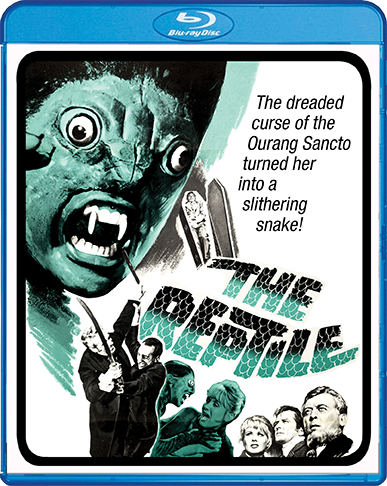