Forum List What's new Dark Style Change width
Log in Register
What's new Search
Menu
Log in
Register
Navigation
Install the app
More options
Dark Style
Close Menu
Posted on July 14, 2019 by t1g3r5fan
You are using an out of date browser. It may not display this or other websites correctly.
You should upgrade or use an alternative browser.
Somber spy thriller debuts on Blu-ray 3.5 Stars

With the success of the James Bond movies, it seemed inevitable that spy movies would be very popular with moviegoers during the 1960’s; in response to their success, some spy movies offered a more realistic alternative to the gadget oriented and suave Bond movies. One of these movies was The Quiller Memorandum, a twist filled story involving a real life menace: the rise of neo-Nazis in post-WWII Germany. Previously released on DVD by Fox, Twilight Time has licensed the movie for its Blu-ray debut.

When a British spy is killed on assignment in Berlin, an American colleague named Quiller (George Segal) is brought in to pick up where his predecessor left off. His job: to investigate a cell of neo-Nazis and locate their headquarters; soon, it’ll become clear that Quiller will be stuck “in the gap” between his British handlers and the mysterious cell he’s investigating. He’ll need his wits to get through this mission, because it seems the motives of both sides are ambiguous…

Following in the footsteps of another “realistic” spy film – The Spy Who Came in from the Cold (1965) – The Quiller Memorandum is an entertaining and twist filled little adventure into the spy world. Directing from a script by Harold Pinter, Michael Anderson fashions a world where the motives are ambiguous and trust can be easily discarded as fast as it’s gained. Also a huge plus is the location camerawork, serving as a reminder that the past – especially in context to this story – is always present and can resurface; the emergence of the neo-Nazi cell in this story serves as proof of this. The only issue with the film is that for all of its twists and ambiguity, one can easily get lost in all of its intricacies and can become just as disoriented like Quiller does in one key scene at the enemy headquarters. That aside, the movie is still a very well scripted, directed, and acted tale that does require multiple viewing to peel away the many layers and understand the serpentine plot.

As the eponymous Quiller, George Segal is very good as the cagey yet quick witted operative caught up in the crossfire; it’s a very notable role for him, coming in the same year he received an Oscar nod for his work in the film version of Who’s Afraid of Virginia Woolf? Alec Guinness casts a memorable impression as the intelligent – if somewhat cool – handler of Quiller; George Sanders and Robert Helpmann make the most of their screen time as the distant aristocratic handlers who don’t seem too interested in the spy world. Senta Berger is solid as the schoolteacher who becomes romantically involved with Quiller and who is caught up with him in the intrigue; Max von Sydow commands attention in every scene he’s in as the mysteriously sinister leader of the neo-Nazi cell. These five performers give the story its delights, thrills, and the pulse that drive it along.

The film’s original 2:35:1 aspect ratio is preserved in this HD transfer. Film grain is organic and strong with fine details rendered faithfully along with a strong color palette; there’s very few cases of age related artifacts present in this transfer, likely making this the best the film has looked on home video and an improvement over the previous Fox DVD.

The film’s original mono soundtrack is presented in a DTS-HD Master Audio track for this release. Dialogue is strong and clear along with the sound effects, with solid ambiance given to John Barry’s moody score. There’s minimal instances of age related issues, meaning that this is likely the best the movie has ever sounded on home video.

Isolated Score Track (with some effects) – John Barry’s score is presented as a stand alone 2.0 DTS-HD Master Audio track with a few sound effects heard in between music cues.

Commentary by film historians Eddy Friedfeld & Lee Pfeiffer – Carried over from the previous Fox DVD, the duo go over the film as well as putting it in context to the Cold War; a very interesting track indeed.

Crisply directed with many layers and twists throughout, The Quiller Memorandum has emerged as one of the better “realistic” spy thrillers of the 1960’s. Twilight Time has gone a great job in giving the movie a solid HD transfer and audio track for its Blu-ray debut, along with porting over the commentary from the previous Fox DVD. Recommended, but since there’s only a limited supply of 3,000 copies, pick up yours before they run out!

Thanks for the review. It seems this is better than the sub-par U. K. disc so I'll be upgrading. I like Senta Berger in this more than in any other film.

Great review. I haven't yet upgraded to the Blu, so this is a nice reminder.

While it's true the original source novel of QUILLER is in the serious John Le Carre mode, the script was written by Harold Pinter, and is in many sequences studded with a wry, ironic humor. The apparent soberness of the film's style helps to bring out the humor of the film's script.

For instance, George Sanders and Robert Helpmann play two upper level bureaucrats who are discussing the ins and outs of the plot at the former's posh club.

Sanders: "How is the duck?"
Helpmann: Very good."
Sanders: Yes. They do that well here."
Helpmann: "What's that?"
Sanders: "Duck."

There's also a very funny scene where Alec Guinness is attempting to demonstrate the precariousness of George Segal's position by using the raisins from a pastry, which he then proceeds to eat.

Pinter liked spy films and the tight dialogue it required. This is a terrific script and Segal is wonderful as the seemingly loud American who knows more than he lets on. His reveal scene when he confronts his German followers is awesome.
You must log in or register to reply here. 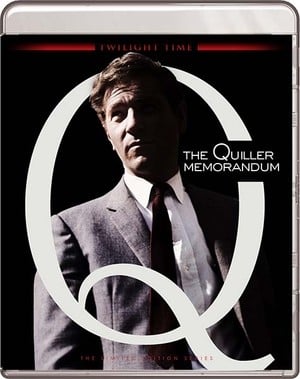