Henry Levin’s biographical portrait of Andrew Jackson’s put-upon wife makes for a watchable if somewhat eclectic film in The President’s Lady adapted from Irving Stone’s best seller. With excellent star performances in the title role and her famous husband and with a first class 20th Century Fox production in support, The President’s Lady may not shake the rafters with its dramatic force, but as a star vehicle for two of the industry’s then-brightest, it’s a fine entertainment.

Esteemed soldier and lawyer Andrew Jackson (Charlton Heston) rises to fame as both a political force and a military hero and rescues the love of his life Rachel Donelson (Susan Hayward) from an abusive marriage to the obnoxious Lewis Robards (Whitfield Connor). Jackson, a man from Tennessee which was at the time the edge of the American frontier, manages to always come out on top even as his critics and opponents characterize him as a rogue from the lawless West especially since his fiery temper won’t allow him to suffer fools gladly. Wherever the couple goes and no matter what heights Andy seems to reach, no one seems willing to give the two of them any peace from their pasts, and when his rival Charles Dickinson (Carl Betz) insults Rachel, Jackson challenges him to a duel that results in yet another black eye on his reputation.

This wouldn’t be the only time Charlton Heston would star in an adaptation of an Irving Stone biography (The Agony and the Ecstasy would follow a little over a decade later when he played Michelangelo), this time the screenplay penned by John Patrick. With the focus on Rachel, however, we don’t get to see much of Jackson’s excitingly heroic exploits in Washington, on the frontier fighting the Creek Indians, leading the army during the War of 1812, or participating in that infamous duel with Charles Dickinson. Instead, we’re treated to neatly filmed but admittedly far less dramatic montages of Mrs. Jackson back home tending the fields, making candles, and other household chores. The amount of abuse hurled at this woman (which includes not just shunning from the elite of Washington society but also disappointments and tragedies on the domestic front as she fails to conceive a child of her own or as fate robs her of one great chance to be a mother to a foundling) also becomes rather burdensome despite the film’s somewhat brief 98-minute running time. So, being deprived of viewing Andy’s dynamic life away from home and instead being offered Rachel’s rather tame home situation gives the narrative an unbalanced and sometimes unsatisfying slant. Henry Levin’s steady if unobtrusive direction doesn’t offer much compensation apart from a couple of Indian attacks in the early going and one or two celebratory dances where the film’s production design can really shine.

Usually Susan Hayward plays a feisty character full of bravado, so it’s a bit mortifying to see her shrink from people’s insults and taunting (the actress’ great restraint is admirable), but the character is often just too perfect to be believed charitably forgiving a debt of honor from two haughty ladies and managing to keep her disappointments in check when fate continuously deals her a very cruel hand (even as her husband seems to go from triumph to triumph). Charlton Heston has a firm handle on Andrew Jackson’s spirit and temper, a characterization which would be reprised by the actor a mere five years later in the 1958 remake of The Buccaneer. John McIntire has some prime moments as Andy’s law partner and best friend John Overton while Oscar-winner Fay Bainter has several good scenes in the early going as Rachel’s understanding and comely mother. Whitfield Connor, Jim Davis, and Carl Betz make handsome scoundrels who make life hard for the Jacksons. Gladys Hurlbut has haughty down pat as the snooty Mrs. Phariss while Margaret Wycherly as Rachel’s bed-ridden mother-in-law who begs her to stay with her no-account son gets one early scene to show how effective an actress she could be.

The film’s 1.37:1 original theatrical aspect ratio is faithfully delivered in this 1080p transfer using the AVC codec. While the image is very film-like with a solid grain structure and possessing excellent sharpness (maybe too good at times where the old age makeup is easily spotted), there are some dust specks, dirt, and bits of debris that crop up from time to time. Grayscale is beautiful with outstanding black levels, and contrast has been dialed in nicely. The movie has been divided into 24 chapters.

Fox engineers have done an excellent job with the DTS-HD Master Audio 2.0 mono sound mix. Removing any trace of age-related problems involving hiss, crackle, flutter, or pops, the track is solid and dependable mixing the dialogue, Alfred Newman’s score, and the sound effects with aplomb.

Hollywood Radio Theater: a one hour radio broadcast from September 28, 1953, featuring Charlton Heston and Joan Fontaine in the leading roles.

Six-Page Booklet: contains some black and white stills, original poster art on the back cover, and film historian Mike Finnegan’s analytical essay on the movie.

Henry Levin’s The President’s Lady isn’t quite the rousing entertainment it might have been had the focus been split between the two protagonists, but it’s still an entertaining superficially biographical movie that offers fine star performances and outstanding production design (Oscar-nominated along with the costumes). There are only 3,000 copies of this Blu-ray available. Those interested in purchasing it should go to either www.twilighttimemovies.com or www.screenarchives.com to see if product is still in stock. Information about the movie can also be found via Facebook at www.facebook.com/twilighttimemovies. 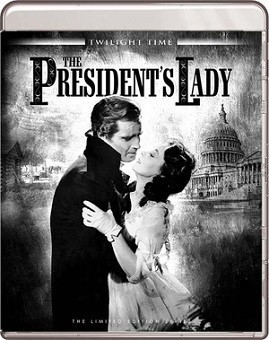