An angry, visceral dissection of eighteen years of a young white boy’s life amid the violence and bigotry of apartheid is the focus of John G. Avildsen’s The Power of One. Based on a popular and well-regarded novel by Bryce Courtenay, the coming of age story is marked by a tone of unending bitterness and loss, but there are moments of great power, too, and the film features some very strong and memorable performances.

An angry, visceral dissection of eighteen years of a young white boy’s life amid the violence and bigotry of apartheid is the focus of John G. Avildsen’s The Power of One. Based on a popular and well-regarded novel by Bryce Courtenay, the coming of age story is marked by a tone of unending bitterness and loss, but there are moments of great power, too, and the film features some very strong and memorable performances.

Born in 1930 in South Africa as the only English boy among Afrikaaners, young P.K. (Guy Witcher, Simon Fenton, Stephen Dorff) loses his mother (Tracy Brooks Swope) by age seven and is sent to a boarding school where he is bullied and brutalized especially by Nazi sympathizer Jaapie Botha (Robbie Bulloch as a youth, Daniel Craig as an adult). A kindly German concert pianist in prison nicknamed Doc (Armin Mueller-Stahl) takes him under his wing and begins his mental education. For physical education, he’s turned over to prisoner Geel Piet (Morgan Freeman) who teaches him how to defend himself by showing him the sport of boxing. Soon, P.K. can handle himself well as he develops quite a reputation as an up-and-coming fighter earning laurels in school for his ring prowess while he is being whispered about as the possible messiah (called “The Rainmaker”) of the downtrodden black people of South Africa. But P.K. is continually confronted by loss of the people he loves as he matures, and in his senior year in private school, he divides his time between fighting, falling in love with the local daughter (Fay Masterson) of a school professor (Marius Weyers), and searching for ways to bring education and freedom to the oppressed people of the land.

Fans of the original novel didn’t find much to like about Robert Mark Kamen’s screen treatment with its unrelenting depression and tragedy. Poor P.K. never seems to be able to celebrate any of his accomplishments (winning school boxing titles, gaining a full scholarship to Oxford, meeting the girl of his dreams) before he’s faced with another devastating loss. And director John G. Avildsen doesn’t make things any easier with abrupt transitions between scenes (especially in the film’s second half) that don’t make things very clear who people are and what they’re trying to accomplish. The scenes of relentless brutality toward the blacks of South Africa are difficult to watch and aren’t soft pedaled by the director who forces the unpleasantness right into our faces at every moment (making a black prisoner eat manure in front of our eyes is maybe pushing the boundaries of explicitness perhaps a bit too far), but the points are certainly made. Of course, the Oscar-winning director of Rocky and The Karate Kid knows how to stage several boxing matches for maximum impact, and they do hold our attention (they increase in brutality, too, of course, as P.K. grows older and faces tougher opponents). The scenes of youthful romance aren’t milked for all they’re worth (they do provide welcome relief from all of the violence and cruelty), but the most impressively staged and shot sequence involves a choral presentation organized by Doc and P.K. showing how several combative native tribes can work together harmoniously to present something captivatingly beautiful (naturally the scene’s hypnotic spell is broken by its coda: the brutal murder of another of P.K. most beloved comrades).

All three of the actors who play P.K. at respectively ages 7 (Guy Witcher), 12 (Simon Fenton), and 18 (Stephen Dorff) make very favorable impressions on the viewer. Fenton and Dorff handle the boxing scenes quite well, and all three handle their dramatic scenes deftly and narrate their portions of the film with aplomb. Old pros Armin Mueller-Stahl as Doc, Morgan Freeman as Geel Piet, and John Gielgud as P.K.’s headmaster St. John give wonderfully crafted and nuanced portrayals. Dominic Walker as P.K.’s best friend Gilbert, Fay Masterson as girl friend Maria, and Alois Moyo as P.K.’s black freedom fighter cohort give P.K. some of his few moments of happiness and are all quietly excellent. As for the vile brutes P.K. must face throughout the film, all live up to their considerable nastiness: Clive Russell as the sadistic Sergeant Bormann, Marius Weyers as Maria’s bigoted father, and especially Daniel Craig as the incarnation of spewing evil as the grown-up Jaapie Botha.

The film has been framed at 1.78:1 and is presented in a transfer that’s anamorphically enhanced for widescreen televisions. Sharpness is the weak link in this transfer being only average or slightly above. Color is warm and nicely modulated with completely viable skin tones. Contrast consistency comes and goes a bit, and there are some dust specks and print nicks here and there. Black levels are also about average or a little more. The movie has been divided into chapters every ten minutes so this transfer has 13 chapters.

The Dolby Digital 2.0 sound mix is decoded by Dolby Prologic into the center channel. It’s an effective mono mix with well-recorded dialogue (though there are some thick accents and no subtitles available to turn on for help), Hans Zimmer’s stirring music, and the proper atmospheric effects all blending together nicely. No age-related problems with hiss or crackle hinder enjoyment of the film’s aural pleasures.

Previously issued by the Warner Archive and now available as a Fox Cinema Archive release, The Power of One is powerful if unrelenting in its brutality in portraying a particularly ugly time in the history of South Africa. Even with its splintered narrative and occasionally unfocused direction, there is much to like with the film’s production and performances. 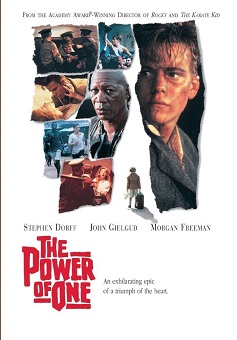