The more things change, the more they stay the same... 4 Stars

What would happen if the U.S. government challenged the freedom of the press?  This actually happened during the Nixon administration, even before the Watergate scandal.   The Post features Tom Hanks and Meryl Streep in the true story of the Washington Post’s defiance of President Nixon in publishing the Pentagon Papers.  The subject matter of this film may have been particularly resonant during its theatrical release in 2017.

What would happen if the U.S. government challenged the freedom of the press?  This actually happened during the Nixon administration, even before the Watergate scandal.

“We can’t have an administration dictating to us our coverage just because they don’t like what we print about them in our newspaper” says editor Ben Bradlee(Hanks) to his publisher Kay Graham, in regard to news coverage of the (then) upcoming Nixon-Cox wedding.  After the New York Times scoops its competitors with coverage regarding the Pentagon Papers,  the government obtains an injunction making it temporarily illegal for the press to publish any further coverage of the content of the top secret reports.  The Washington Post faces its challenge after more of the documents are dropped literally into the collective laps of the reporters in the Post.  Bradlee and Graham faced possible ruin following their decision to publish the information before the Supreme Court had determined the legality of its publication.  Fortunately for the Post and the NY Times, and the press that followed them, the Supreme Court ruled in favor of upholding the First Amendment.

Produced and directed by Steven Spielberg, The Post has many layers beyond its conception of the freedom of the press weighed against the government’s preservation of its secrets.  The film also dramatizes the courage of Kay Graham, the direct heir of the Washington Post from her family, who was passed up initially as publisher in favor of her husband who married into the family.  Kay is inadvertently forced into the role of publisher after the untimely passing of her husband.  The Post plays up the sexism that almost deprived Graham of her position in which she excelled as a newspaper publisher.  Another theme underlying the film is the transformation in the relationship between Kay and her editor Bradlee from a prickly relationship in the beginning to one of mutual admiration and trust.  The Post is not a typical action thriller so much as a legal thriller with freedom(of the press and the public generally and the Post and Times specifically) being the item at stake.  The Post is an excellent dramatization of historical events and an interesting demonstration of the essential role of a free press in preservation of true democracy.

The Post appears on 4K UHD and Blu-ray disc in its original 1:85.1 aspect ratio.  The 4K UHD disc displays the film  in 2160p using the HEVC codec with HDR.  The film was finished as a 4K digital intermediate.  The cinematography by Janusz Kaminski(Saving Private Ryan, Minority Report) is served well in this transfer which seems flawless with its solid blacks and exquisite fine detail.  Colors are not particularly dynamic but this is no fault of the transfer so much as an artistic choice.

The UHD disc defaults to the English 7.1  DTS HD-MA audio.  The sound mix uses directional audio exceedingly well, from the typewriters in the newsroom to explosions on the battlefield in Vietnam.   The soundtrack by John Williams sets the mood well in the film and is reproduced flawlessly on audio.

The UHD disc defaults to the English 7.1  DTS HD-MA audio.  The sound mix uses directional audio exceedingly well, from the typewriters in the newsroom to explosions on the battlefield in Vietnam.

The special features  are relegated to the Blu-ray disc and are cleverly titled based on the sections of a newspaper.  Special features consist of all of the following:

Layout: Katherine Graham, Ben Bradlee & The Washington Post(21:51):  Spielberg introduces this featurette regarding the real life people and place dramatized in the film.

Editorial:  The cast and characters of The Post(15:56):  Screenwriters, cast, and producers talk about the actors selected to play the real people portrayed in the film.

The Style Section:  Re-creating an era(17:02):  Featurette regarding the excellent reproduction of period details in the film.

Arts and Entertainment:  Music for the Post(6:45):  The contribution by the legendary John Williams to the soundtrack is discussed here.

The Post is an interesting legal thriller with its ruminations on the essential role of a free press in preserving democracy.  The video and audio presentations on this 4K are top-notch,, and the special features are definitely worth a look.

Comments are welcome on the film and the subject matter but readers are reminded that we refrain from discussions of politics and religion on the Home Theater Forum so that our focus can remain on the media rather than the message.

This movie was excellent and if I had not already had about 14 4K titles in hand at Best Buy today plus two other blu-rays I would have picked up this title on 4K! Am thinking I may pick The Post up the same day I also pick up Sully both on 4K.
You must log in or register to reply here.
Share:
Facebook Twitter Reddit Pinterest Tumblr WhatsApp Email Link 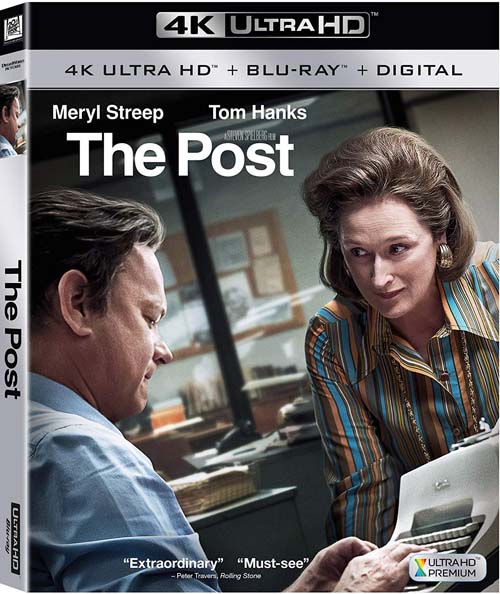