Welcome to the world of CG, Charlie Brown! 4 Stars

Charles Schulz’s beloved moppets enter the 21st century feature film world with CG animation and all the trimmings while remaining entirely faithful to their flat, hand-drawn origins in the delightful and nostalgically familiar The Peanuts Movie.

Charles Schulz’s beloved moppets enter the 21st century feature film world with CG animation and all the trimmings while remaining entirely faithful to their flat, hand-drawn origins in the delightful and nostalgically familiar The Peanuts Movie. Drawing on ideas initiated by the comic strip artist over the course of a half century career, The Peanuts Movie may not win many prizes for originality, but it inserts viewers into the philosophical world of these unique characters in a comfortable and enjoyable way. Compared to some of the lackadaisical most recent television specials that were created for the characters, this is far better than it has any right to be.

While the film is loaded with vignettes and blackout sketches, there are two running plot strands: Charlie Brown’s (Noah Schnapp) quest to better himself so to be fully worthy of introducing himself to new arrival in town, the Little Red-Haired Girl (Francesca Capaldi) and Snoopy’s (Bill Melendez) eternal aeronautical dogfight (no pun intended) with the Red Baron while pursuing a new love interest for himself, a fluffy pooch named Fifi (doggie sounds by Kristin Chenoweth). All of the expected Peanuts gang are present in support of these two on-going narratives.

And much of what is present in the film is very familiar indeed courtesy of the screenplay by Craig Schulz, Bryan Schulz, and Cornelius Uliano. You’ll see Charlie Brown continually trying to fly that uncooperative kite while the kite-eating tree looms menacingly. Charlie will visit his psychoanalyst Lucy (Hadley Belle Miller) for advice about his wishy-washiness and once again make an attempt to kick that football. Lucy will moon over Schroder (Noah Johnston) who only dreams of Beethoven while Sally (Mariel Sheets) carries the torch for her Sweet Baboo Linus (Alex Garfin). Snoopy inhabits three of his most familiar personas: the World War I flying ace, of course, but also the author writing of his fearless exploits and, naturally, Joe Cool during the school dance sequence where we see the kids do moves familiar to us all who have been watching that Christmas special over the last half century. And you’ll hear several of the familiar Vince Guaraldi themes made famous through their use in the television specials (though the movie’s score isn’t slavish to using them; there is plenty of other music that supplements the on-screen activities). The key accomplishment here is that the writing stays true to Schulz’s philosophy: persistence in the face of continual defeat and disappointment and honor as the cornerstone of living a good life which will come with its own rewards.

The animators at Fox’s Blue Sky Animation Studios have done a rather miraculous job taking Charles Schulz’s flat one-dimensional drawings and bringing them to life in a CG world. While one might think after so many decades of those television shows (and four previous feature films from a long time ago) that anything different from those representations might seem false and untrue to the strip’s look and feel, what actually happens is that after a few minutes, one becomes unaware of the characters being multi-dimensional. True, the backgrounds here are photo-realistic (and that ice pond they skate and play hockey on in the opening Snow Day sequence is a gorgeous, eye-popping delight) rather than the minimalistic look of the comic strip and early TV specials, but one tends to forget that, too, as Snoopy’s doghouse dives through clouds and soars through the wide open skies in pursuit of his nemesis and the gang goes through their daily chores at school with classroom activities, assemblies, and dances as well as making preparations for Christmas. The animators do pay homage to Charles Schulz in some thought bubbles which show what appears to be original artwork of Schulz and from the TV animation supervised by Bill Melendez.

And the voices chosen for the children are on the whole much better than many of those used for quite a few of the most recent television specials and harken back to the best voices of the golden years of the TV shows in the mid-1960s. Noah Schnapp’s Charlie Brown, Alex Garfin’s Linus, Mariel Sheets’ Sally, and Rebecca Bloom’s Marcie come the closest to capturing the unique voice cadences of the original child voice actors. Hadley Belle Miller might not have quite the hatchet-voiced authority of the best TV Lucys and Venus Schultheis’ Peppermint Patty might need a touch more sandpaper to do the role full justice, but these are quibbles. None of the children truly disappoint and act fluidly the lines they’ve been given.

The film’s original theatrical aspect ratio of 1.85:1 is faithfully rendered in this 1080p transfer using the AVC codec. Sharpness is exquisite, and colors are bright and beautifully controlled with never a hint of blooming. Banding is also nowhere in sight. Black levels are excellent, and the entire picture is invitingly appealing. The movie has been divided into 24 chapters.

The film ran theatrically also in 3D engagements, and there is a 3D Blu-ray release, but it is not reviewed here.

The DTS-HD Master Audio 7.1 sound mix is a solid, professional effort, but it seems slightly subdued and lacking great resonance. While the dialogue has been beautifully recorded (with just a touch of directionalized oomph), the music score by Christophe Beck and songs by numerous hands (which represent much of the surround activity in the available channels) don’t quite draw in the listener into a wide sound environment. Compared to recent Pixar releases, the sound mix for The Peanuts Movie seems a trifle underwhelming.

Snoopy Snippets (2:45, HD): six blackout sketches featuring Snoopy and his pals. They may be watched separately or in montage.

You Never Grow Up, Charlie Brown (30:17, HD): director Steve Martino, producers Paul Feig and Michael Travers, producer-writer Craig Schulz, Charles Schulz’s widow Jean, lead animator Raymond Ross, and art director Nash Dunnigan discuss the 3 ½-year journey to bring the project to the screen. We also get a tour of Blue Sky Animation Studios showing some of the crew at work on the movie.

Snoopy’s Sibling Salute (1:55, HD): a memorable moment where Snoopy is surrounded by his siblings from the Daisy Hill Puppy Farm.

Get Down with Snoopy and Woodstock Music Video (2:17, HD): an assortment of dancing scenes from the movie compiled in montage for this music video.

Behind the Scenes of “Better When I’m Dancin’” (2:53, HD): Meghan Trainor takes us on a brief tour of the Fox backlot where she films her music video with members of her family participating.

Snoopy’s Playlist (27:52, HD): ready access to the sixteen musical moments in the movie. There is a “Play All” feature with this jukebox.

Welcome to the world of CG, Charlie Brown! Fox’s The Peanuts Movie brings Charles Schulz’s enchanting creations to the big screen once again with familiar adventures but with a handsome production and the promise of possible future, fresher adventures in store. Recommended!

Loved taking my son to this one. Picked it up for an Easter gift for him.
Great movie!

Thanks for the information. I had completely forgotten about Bon Voyage, Charlie Brown (and Don't Come Back!) Wasn't that parenthetical statement part of the ad campaign?

Thanks for the information. I had completely forgotten about Bon Voyage, Charlie Brown (and Don't Come Back!) Wasn't that parenthetical statement part of the ad campaign?
Click to expand... 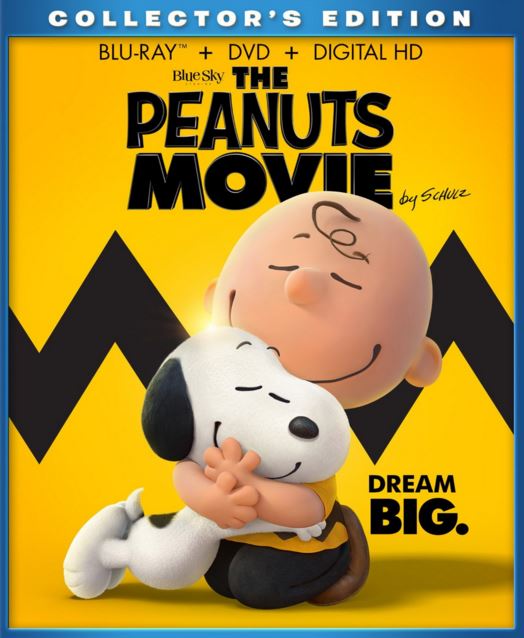