Norman Z. McLeod’s The Paleface offers Bob Hope at the zenith of his powers as a film comedian in a western comedy that touches on every trope of the genre and throws fetching Jane Russell into the mix for good measure.

Bob Hope reached the pinnacle of his film career with The Paleface, a knockabout western comedy that eventually became his biggest hit without Bing Crosby as a co-star. In fact, with the combination of this film (which played most of its dates in 1949), The Great Lover, and Sorrowful Jones, Hope was able to surpass his friendly-rival Crosby and land atop the list of box-office draws for 1949, his first and only time on the top step of the ladder after Crosby had dominated there for the previous five years. The Paleface plays to all of Hope’s strengths as a film comedian, and with a fetching co-star Jane Russell, a hit song, and glorious Technicolor, it’s little wonder the film became such a favorite.

Tasked as a secret federal agent to discover the identity of the traitors who are selling weapons to the Indians, Calamity Jane (Jane Russell) marries inept, cowardly dentist Peter Potter (Bob Hope) as a cover for her investigation. On the way west, the couple encounter the usual dangers of the prairie, but those experiences are nothing compared to the reception they receive once they arrive in a lawless town where the criminals are operating from.

The screenplay by Edmund Hartmann, Frank Tashlin, and Jack Rose provides Hope with lots of verbal and visual gags that play up Hope’s character who’s full of false bravado but knows within he’s really a klutz. We get the expected Indian raids (where Hope’s Potter thinks he’s mowing down the attacking multitudes but who are really being killed by sharpshooter Jane), gunfights at sundown (the movie’s best staged sequence where director Norman Z. McLeod uses his frame to plot Potter and his nemesis Big Joe – Jeff York – on opposite sides as they stalk the town for one another), saloon shenanigans (dance hall singer Pepper – Iris Adrian – warbles “Meet You ‘Round the Corner” with the help of dubber Annette Warren), an Indian sacrificial rite (which admittedly goes on a bit too long), and a climactic chase. Likely Tashlin is responsible for the cartoonish running gag of Potter (and inevitably Calamity Jane) being jerked off the wagon by enthusiastic horses, and Potter also delightfully increases the number of Indians he knocked off each time he tells the story. And best of all Hope doesn’t break the fourth wall here speaking directly to the audience knowing he’s actually in a movie; the film is played for laughs but strictly on the level though it would have been very easy to ad-lib wisecracks at his Paramount bosses as his character finds himself in one precarious situation after another.

In addition to his funny visual gags with his dental equipment and six-shooters and a constant stream of putdowns, Bob Hope also gets to warble his second Oscar-winning ditty in one of his films, the engaging “Buttons and Bows” (scribed by Jay Livingston and Ray Evans). Though an accomplished singer, Jane Russell isn’t given a song in this one (she’d have better luck when she and Hope were reteamed four years later in the movie’s sequel Son of Paleface). But though she fills out buckskins well, the western styles of the era don’t show her figure off here to great advantage; she makes up for it with her own wry way with a sardonic remark. Robert Armstrong and Robert Watson do fine as the requisite bad guys though neither actor really gets used to his best advantage. Jeff York offers a more threatening presence as town bully Big Joe, and Iris Adrian is always welcome as the coarse saloon girl Pepper. Chief Yowlachie and the young Iron Eyes Cody are the primary Indian antagonists once Potter reaches the reservation.

The film is framed at its theatrical aspect ratio of 1.37:1 and is presented in 1080p resolution using the AVC codec. While the image is sharp and clear (with slight diffusion used during Jane Russell’s close-ups but with clarity crisp enough to tell those are stunt people managing the horses for Bob and Jane), there are some pesky specks of dust and dirt which turn up here and there throughout the movie’s running time. But the Technicolor is nicely saturated without ever going overboard, and contrast levels are spot-on. The movie has been divided into 9 chapters.

The DTS-HD Master Audio 2.0 mono sound mix is very appropriate to its era of sound recording. Dialogue has been well-recorded and has been professionally combined with Victor Young’s background score, the Evans-Livingston songs, and the busy sound effects to fashion a fine soundtrack. Any traces of age-related anomalies like hiss, flutter, crackle, and pops have been eliminated.

Audio Commentary: film historian Sergio Mims offers a rather ramshackle audio commentary, filled with lots of interesting facts about the filmmakers both before and behind the camera but haphazardly presented making for a rather exhausting listen.

“Buttons and Bows” Sing-Along (2:07, SD): the excerpt from the film featuring the Oscar-winning tune with on-screen lyrics.

Kino Trailers: The Cat and the Canary, Road to Morocco, The Ghost Breakers.

Norman Z. McLeod’s The Paleface offers Bob Hope at the zenith of his powers as a film comedian in a western comedy that touches on every trope of the genre and throws fetching Jane Russell into the mix for good measure. Kino Lorber’s new Blu-ray release may not feature a perfect video transfer, but it’s the best the film has ever looked on home video and will be a must for fans of the stars. Recommended!

Great review, thanks! THIS one is in my July Kino box so I won't get it until ARABIAN NIGHTS is also released on the 21st but this review has me panting!
Reactions: timk1041, PMF and Matt Hough

Yup, thank you for this review. I haven't bought this yet as I have the iTunes HD digital. I'll bite during one of Kino's sales.
Reactions: Matt Hough

I honestly like Son of Paleface more (sillier, Russell gets to sing, Trigger steals the show), but I understand mine is a minority opinion. That review can be found here.
Last edited: Jul 10, 2020
Reactions: Jeff Flugel, lark144, RBailey and 2 others

I'm not sure yours is a minority opinion. I've attended screenings of SON OF PALEFACE (one with Jane Russell in attendance) and the general consensus has usually been that it's better than the original.
Reactions: Jeff Flugel, Douglas R, Matt Hough and 1 other person

Rob_Ray said:
I'm not sure yours is a minority opinion. I've attended screenings of SON OF PALEFACE (one with Jane Russell in attendance) and the general consensus has usually been that it's better than the original.
Click to expand...

I also think the general consensus has always been that the second film is the better of the two, but I have always enjoyed the first one more. I actually think I'm in the minority.
Reactions: timk1041, AnthonyClarke and Matt Hough
A

Actually, I've always thought that my opinion that The Paleface is superior to the sequel was in the minority. Son of Paleface is too silly but still has some good content. The first film is structured much better, has the more developed conflict and character development for Hope (granted, the usual coward overcoming his cowardice to be the hero), and the more satisfying plot line. This disc will soon be in my collection.
Reactions: timk1041

I've always enjoyed 'Paleface' far more than the sequel. There's a synergy at work; a spark which seems just a tad lacking in the sequel. But of course that's a totally subjective opinion. Get both, watch in sequence and judge for yourself.
If you see the sequel first, that may colour your judgement forever....
Reactions: Will Krupp
R

Interesting that Matt H thinks the video on the second film is better than on the original.

I agree. I never found "The Paleface" all that funny.

I like both but prefer The Paleface over Son of Paleface. I'll eventually get both as I upgrade my Bob Hope collection. 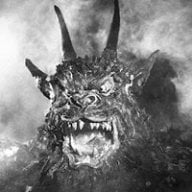 The Paleface was the very first movie I ever saw. My mother took me to it in 1948 when I was six years old. It was back when every small town had a movie theater. I remember being distressed at the scene where Hope's legs are tied to two different sapling trees.
Reactions: Todd Mattraw, Will Krupp, KPmusmag and 1 other person
You must log in or register to reply here. 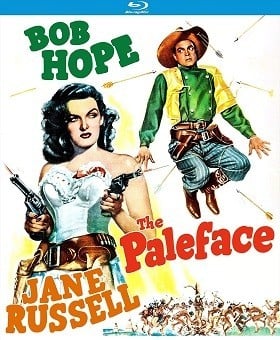