Forum List What's new Dark Style Change width
Log in Register
What's new Search
Menu
Log in
Register
Navigation
Install the app
More options
Dark Style
Close Menu
Posted on January 16, 2021 by Matt Hough
You are using an out of date browser. It may not display this or other websites correctly.
You should upgrade or use an alternative browser.
Zesty, entertaining transcription of a blockbuster Broadway musical. 4.5 Stars

You’ll have to look long and hard to find a more enjoyable or effervescent screen transcription of a hit Broadway musical than George Abbott and Stanley Donen’s The Pajama Game.

Labor versus management in both business and pleasure clashes most delightfully in George Abbott and Stanley Donen’s The Pajama Game, a sensational and most faithful cinematic transcription to the 1954 Broadway musical hit. With most of the Broadway company brought to Hollywood to reprise their stage performances on the screen abetted by the inspired casting of Doris Day in the leading role, The Pajama Game is one of the most satisfying and entertaining screen musicals ever made.

New pajama factory superintendent Sid Sorokin (John Raitt) is eager to make good at his new job, but he clashes almost immediately with the head of the union’s grievance committee Babe Williams (Doris Day). Though she fights their mutual attraction, she eventually gives in to love, only to find herself on opposite sides of a union struggle with her boy friend to add 7 ½ cents to employees’ wages. Penny-pinching pajama company president Myron Hasler (Ralph Dunn) is determined to deny the raise causing the employees to fight for their pay raise using any and all means at their disposal. The fight leads to some strained feelings between the lovebirds.

The George Abbott-Richard Bissell screenplay retains all of the major Richard Adler-Jerry Ross musical moments from the stage show (the deleted songs like “A New Town Is a Blue Town,” “Her Is” and “Think of the Time I Save,” as tuneful and fun as they are, basically reveal the character information contained therein with on-screen behaviors or dialogue), and with the original company socking across the material, the eleven remaining numbers provide plenty of song and dance for musical connoisseurs. Among the delights carried over from the stage are “I’ll Never Be Jealous Again,” the soft shoe song and dance between timekeeper Vernon Hines (Eddie Foy Jr.) and company secretary Mabel (Reta Shaw) as she attempts to rein in his mistrustfulness of girl friend bookkeeper Gladys Hotchkiss (Carol Haney), “Steam Heat” and “Seven-and-a-Half Cents,” two union-situated songs showing off some of Bob Fosse’s newly stylized dancing techniques (which brought the celebrated dancer-director the first of his eight Tony Awards), “Racing with the Clock” which gets the film off to a toe-tapping, beautifully staged and shot beginning, “Once-a-Year Day” providing an all-stops-out company picnic polka, and the show’s two standards: “Hey There” in which lovesick Sid Sorokin duets with himself on the Dictaphone machine and “Hernando’s Hideaway,” a novelty number set to an infectious tango rhythm about the town’s most notorious hot spot. Later in life, Stanley Donen revealed he actually directed the film himself (contractual obligations gave George Abbott screen credit), and he manages to shoot the production numbers especially with the same zest and tempo for which he was known in such previous films as Seven Brides for Seven Brothers and On the Town.

Watching the film for the first time, one would swear the role of Babe Williams was written especially for Doris Day, so perfect is she in the role of the sassy, fun-loving singing factory worker. She’s peppy and dynamic in her opening “I’m Not at All in Love” and heartbreaking in a melting reprise of “Hey There” when it looks as if she’s lost her man for good, but she and John Raitt sizzle the screen in their two primary duets “Small Talk” and especially “There Once Was a Man” where the exciting western rhythm and their undeniable chemistry combine to make for a really memorable and unusual pair of love songs. John Raitt for the first and only time gets to recreate one of his many stage roles on screen, and he couldn’t be better: trim and fit and in great baritenor voice throughout. Eddie Foy, Jr. recreates his stage antics with singing, dancing, and drunken knife throwing (though his jealousy dream ballet from the stage was dropped for the film), and Carol Haney makes a fun cartoonish love interest for him reprising her Tony-winning role excelling especially with her dancing. The always wonderful Reta Shaw is continually an asset to any production she’s a part of, and she’s assisted by Jack Straw as ladies’ man Prez and the irreplaceable Barbara Nichols and Thelma Pelish as factory workers fighting for their long-deserved raise.

The film’s original theatrical aspect ratio of 1.85:1 is presented in a 1080p transfer using the AVC codec. The sometimes problematic WarnerColor looks sensational here with solid, consistent hues, and combined with the astonishing sharpness of the image (except in glamour close-ups of Miss Day which still manage to show some of her freckles beneath the cosmetics), the image is really impressive. Contrast is spot-on, and the advance over the DVD image quality will continually amaze you. There are no video anomalies like dust, dirt, reel cues, or debris to distract from your viewing experience.

The DTS-HD Master Audio 2.0 sound mix may be mono, but you’re likely to be majorly impressed with the full-bodied fidelity offered on this disc. The brassy Warners orchestra is in full flower here, and the dialogue, lyrics, and sound effects have been combined with professional ease. There are no problems with age-related hiss, crackle, pops, or flutter.

Deleted Song (3:02, SD): Doris Day sings and emotes “The Man Who Invented Love” written especially for her by Richard Adler.

Song Selection: a menu tab allows you to jump to any of the film’s musical numbers.

You’ll have to look long and hard to find a more enjoyable or effervescent screen transcription of a hit Broadway musical than George Abbott and Stanley Donen’s The Pajama Game. And with the superb visual clarity and audio excellence of Warner Archive’s new Blu-ray release, this disc couldn’t come with a higher recommendation!

With this review we have both consistent hues and a consistent Hough; which translates, always, into consistent excellence.

I don't much like musicals, but this one's pretty fun, and a lot of that credit goes to the Bob Fosse-choreographed numbers.

Agree that the Blu-ray looks tremendous!

I am SO over the moon at this review and I feel like I've been waiting for this on blu-ray for YEARS! Oh, wait, I HAVE, lol

Thanks Matt, I'm so jealous that you've already seen it but it couldn't happen to a nicer guy!!


PMF said:
With this review we have both consistent hues and a consistent Hough; which translates, always, into consistent excellence.
Click to expand...

Well, THAT brings up an interesting point. In my head, I've been pronouncing his last name all these years as "Huff!" Should it be "Hew?"

I forget where I read it, but what I understand is that Donen wanted Abbott, who was the producer, to share credit for directing because he wanted Abbott's input to make the film consistent with the stage play. Abbott agreed if Donen took co-producer credit. Result: the movie was, according to the New York Times, looking as if it were "plucked off the Broadway stage and re-created as a movie." The two men must have liked working together, because they did the same thing with Damn Yankees.
P

Will Krupp said:
[...]Well, THAT brings up an interesting point. In my head, I've been pronouncing his last name all these years as "Huff!" Should it be "Hew?"

PMF said:
If it isn’t pronounced as Hoe;
then I, too, must also know.
Click to expand...

Ball's in your court, Matt!

"History has its eyes on you!!"

Will Krupp said:
I am SO over the moon at this review and I feel like I've been waiting for this on blu-ray for YEARS! Oh, wait, I HAVE, lol

Thanks Matt, I'm so jealous that you've already seen it but it couldn't happen to a nicer guy!!

Well, THAT brings up an interesting point. In my head, I've been pronouncing his last name all these years as "Huff!" Should it be "Hew?"

"Huff" is correct, Will; just like siblings Julianne and Derek on TV.
P

RE-WRITE of Post #2:
Thank you, Matt, for this review and for your consistent excellence.

Who knows. You can basically pronounce it anyway you want based on the crazy English language.

Which, surprisingly, is pronounced HOOT-en!

Will Krupp said:
Which, surprisingly, is pronounced HOOT-en!
Click to expand...

Hmmm- I thought it was pronounced MIFF-lynn - as in Dunder Mifflin ! Which bring us back to DOH

Malcolm R said:
Who knows. You can basically pronounce it anyway you want based on the crazy English language.

Will Krupp said:
Which, surprisingly, is pronounced HOOT-en!
Click to expand...

Which brings us back to “Houghten Yankees”.

Terrific review, Matt, of a most enjoyable musical. If you ever feeling a bit blue, put this film on for a spin and your spirits are bound to lift.

Darby67 said:
Terrific review, Matt, of a most enjoyable musical. If you ever feeling a bit blue, put this film on for a spin and your spirits are bound to lift.
Click to expand...

Boy, howdy, do I agree with that! It is definitely the VERY definition of a feel good musical.

George Bernard Shaw long ago put it best.
How do you spell fish? Answer ... Ghoti.
GH as in Rough. O as in Women. Ti as in Condition.

I just played the dvd on my 85" Sony and it is barely watchable. The video only looks acceptable on a 32' set. I will definitely upgrade this one!

If all goes well, we'll have this in a week!!

The DVD is in fact very viewable. As long of course as you bought the Warner edition and not one of the semi-bootleg rip-offs.
But of course I'll be upgrading. Goes without question.
You must log in or register to reply here.

The Plague of the Zombies – Blu-ray Review 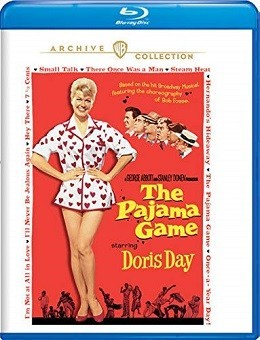