Sidney Sheldon had a very diverse career as a screenwriter (he won an Oscar for his witty script for The Bachelor and the Bobby-Soxer in 1947), creator of several TV series (I Dream of Jeannie and Hart to Hart stand out as his most enduring creations) and popular novelist. It was from the latter career that gave birth to The Other Side of Midnight, an epic saga of love and betrayal set in between WWI and WWII, in 1973; the novel was a huge bestseller and 20th Century Fox picked up the rights to turn it into a movie four years later. Now, boutique label Twilight Time has picked it up to give the movie its Blu-ray debut.

Spanning the course of several years, the movie charts the passionate yet ill-fated love affair between roguish American pilot Larry Douglas (John Beck) and seemingly innocent French girl Noelle Page (Marie-France Pisier). When they first meet prior to WWII in Paris, they fall madly in love, with Larry promising to marry her when he returns; when he doesn’t and finding herself pregnant, Noelle begins a dramatic transformation from innocent to steely femme fatale. Rising from model to international movie star, Noelle eventually finds herself being the object of affection for Greek tycoon Constantin Demetris (Raf Vallone) and becomes his mistress; she now has the means to seek revenge against Larry for his betrayal, but she doesn’t expect him to rekindle their romance and begin to plot a sinister fate for Larry’s wife Catherine (Susan Sarandon)…

Most people familiar with the movie probably know about its odd place in cinematic lore. When a certain George Lucas directed movie started to run into budget problems and cause headaches for the studio, executives had a seemingly bright idea: they would allow theaters to book prints for that movie on the condition they also booked prints for The Other Side of Midnight. The thinking was that Midnight would be a huge box office success while they would likely cut their losses with the Lucas movie; that would turn out to be one of the greatest miscalculations in Hollywood history. If you haven’t figured it out by now, the movie that executives thought would bomb – Star Wars – would go on to be a phenomenal success and spawn one of the most fervent fan bases in popular culture that’s still going strong; as for Midnight, while it did made a modest profit at the box office, the movie mostly faded away from the public eye and was widely thought by critics as a failure.

Now that more than 40 years have passed since its initial release, it’s time to see the movie for what it truly is: an enjoyable throwback to the lush pictures of the 1940’s that were also based on popular novels (fans of Now, Voyager will likely understand what I trying to get at here). The style of those pictures are matched by the grittiness of 1970’s filmmaking, which also seemed to have a fondness for the nostalgia of the 1930’s and 1940’s in quite a few of the movies released during the decade; that convergence of two different styles and eras is equaled in the crew members working on the film. Longtime Fox production designer John DeCuir worked on the sets, recreating the WWII-era scenes of Paris, Washington, D.C., and Greece to great effect. Costume designer Irene Sharaff – who would receive the film’s lone Oscar nod for her work her here – brilliantly captrues the glamour of Noelle’s rise to fame and power and contrasts it to the more subdued tones in Catherine’s wardrobe. Cinematographer Fred J. Koenekamp, still a relatively few years fresh off of winning an Oscar for his work on Irwin Allen’s The Towering Inferno (1974), captures the locales with a stark beauty that’s appropriate for these globetrotting adventures involving romance and power. Director Charles Jarrott already had some experience with a story involving power and romance – his work on the Oscar-nominated Anne of the Thousand Days (1969) immediately comes to mind – and manages to maintain our interest in the story throughout although some scenes stand out better than others (case in point, the harrowing abortion scene that still makes this viewer wince and the scene involving the ice cubes is better experienced than talked about here). The combination of these talents, along with composer Michel Legrand’s beautifully lush score, makes for a visually sumptuous romantic epic combining both grit and glamour in balanced doses.

The decision to cast those who weren’t seen in the Hollywood type does help the film to some degree. Marie-France Pisier, who was fresh off an international smash with Cousin, Cousine (1975) and selected out of a group of several other French actresses considered for the part, make for an appropriately luminous Noelle. John Beck, who had a handful of interesting appearances in the movies of the 1970’s, has probably one of his best roles as the roguish cad Larry. Although both Pisier and Beck made for an attractive couple, the best performance of the film likely has to go to then up and coming actress Susan Sarandon, making Catherine both sweet natured and steely when her life is put on the line in the second half of the movie. As the Greek tycoon clearly modeled after the real life Aristotle Onassis, Raf Vallone exemplifies the man of power and privilege who is both the user and the used – especially when it comes to Noelle. Other notable appearances include Clu Gulager, Howard Hesseman, Michael Lerner, Titos Vandis, French director Christian Marquand, and Boss Hogg himself, Sorrell Booke.

The original 1:85:1 aspect ratio of the movie is preserved in this stunning HD transfer that exceeds the previous DVD transfer. Grain is film like and sturdy, with fine details, skin tones, and shadows clear and strong. Colors are vivid with minimal instances of scratches, dirt, dust, and speckling; the Fox Archives have done another stellar job with this transfer, making this probably the best the move has looked on home video.

The film’s original mono soundtrack is preserved and presented on a 2.0 DTS-HD Master Audio track. Dialogue and sound effects have strong clarity and ambiance along with Michel Legrand’s score and additional source  music, which has strong fidelity without being too overpowering. An optional 1.0 DTS-HD Master Audio is also available as well. Again, the film hasn’t sounded this good on home video and both tracks are very good.

Isolated Score Track (with some effects) – Presented in a separate 2.0 DTS-HD Master Audio track, viewers can choose to experience Michel Legrand’s lush score with a few sound effects carrying over; like most of the isolated score tracks from Fox, this sounds like it was taken from the original scoring sessions done for the movie.

Commentary with producer Frank Yablans, author Sidney Sheldon, director Charles Jarrott, & film historian Laurent Bouzereau – Taken from the 2007 Fox Cinema Classics DVD, this insightful and entertaining track covers the stories behind the movie. My favorite tidbit: an important plot point in the movie came from an unfilmed screenplay that Sheldon wrote for RKO many years ago.

Noticeably not ported over from the Fox DVD was a still gallery containing stills from the movie as well as original advertising for the movie. Also, the disc contains a rundown to the titles Twilight Time has released up to this point along with a booklet containing Julie Kirgo’s insightful essay on the movie.

The Other Side of Midnight certainly may not be a classic, but it certainly deserved better than what it got at the time of the initial release. Twilight Time, through their distribution deal with Fox, has produced a beautiful Blu-ray release with a wonderful presentation of the movie that can allow folks to rediscover the movie and hopefully find enjoyment in this pulp cinematic epic. However, there’s only 3,000 copies made of this title, so get your copy on either TT’s website or Screen Archives before it’s gone for good!

Sounds like a good quality blu which I wouldn't mind getting down the line. I read many of Sidney Sheldon's novels back then and looked forward to this film, but John Beck didn't jive with the character I had envisioned. But I still wouldn't mind seeing it again after all these years.
Reactions: PMF

Let's be honest here...this film is really only notable for being the answer to the Trivial Pursuit question: "What film did Fox Executives think was going to be their big hit of Summer 1977? (to the point of forcing theaters to run some crappy spaceship movie in order to book it)"
P

Thanks to this review, I've been alerted to another Michel Legrand score; and an isolated one, at that.
Further research has also shown me that the sole Oscar nomination for The Other Side of Midnight went to Irene Sharaff;
representing her 15th and final career nomination for Costume Design.

Yup, I would say that there's plenty enough in the audible and visual departments to make this one worth exploring.
Last edited: Oct 23, 2018
You must log in or register to reply here.

Comin' At Ya!: THE HTF 3D GURU REVIEW 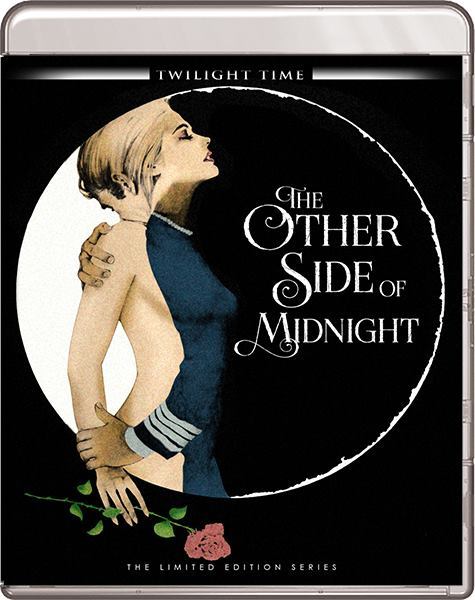