Forum List What's new Dark Style Change width
Log in Register
What's new Search
Menu
Log in
Register
Navigation
Install the app
More options
Dark Style
Close Menu
Posted on February 2, 2020 by Matt Hough
You are using an out of date browser. It may not display this or other websites correctly.
You should upgrade or use an alternative browser.
Overwrought Hollywood melodrama remains oddly compelling. 2.5 Stars

An insider Hollywood melodrama which features lots of stars and glamour but sinks pitiably in many of its outrageously over-the-top monologues, Russell Rouse’s The Oscar has a present-day undeserved reputation as a camp classic.

An insider Hollywood melodrama which features lots of stars and glamour but sinks pitiably in many of its outrageously over-the-top monologues, Russell Rouse’s The Oscar has a present-day undeserved reputation as a camp classic. It’s not nearly as outrageous as its show biz kissin’ cousin Valley of the Dolls, and its focus on one reprehensible individual may wear out its welcome over the course of two hours, but there are a lot of Tinsel Town truths buried under some of the tawdriness of the story and its resultant images, and the film may play better now to older generations than it did when first released to a disbelieving, unpersuaded public.

Scrappy go-getter Frank Fane (Stephen Boyd) abandons his stripper girlfriend Laurel (Jill St. John) and their mutual best friend Hymie (Tony Bennett) when he’s offered an opportunity to become an actor by drama coach Sophie Cantro (Eleanor Parker). Desperate for success, Frank allows Sophie to win him a Hollywood agent Kappy Kapstetter (Milton Berle) and subsequently a contract with Galaxy Pictures headed by Kenneth H. Regan (Joseph Cotten). Soon, Frank becomes an established actor and reconnects with fashion designer Kay Bergdahl (Elke Sommer) for whom he lands a job in Edith Head’s wardrobe department. But the egotistical Frank is also a heartless publicity hound and is ruthless in his behavior to everyone around him thus alienating everyone who cares for him who eventually have no time for him when his career begins to sour. And then Oscar comes calling, an opportunity for Frank to get back on top.

The Harlan Ellison-Clarence Greene-Russell Rouse screenplay is based on one chapter of Richard Sale’s best-selling novel The Oscar, and the writers use the flashback method to tell the story of their antihero, beginning with the dazzling excitement of Oscar night with Frank the frontrunner for the prize and then going back into the past to show us all of the ugly steps it took this unbridled heel to get to the Big Night. In his desperate climb over everyone to get to the top, the story draws clear parallels to Budd Shulberg’s What Makes Sammy Run? and producer Joseph E. Levine (who had recently already explored the underside of Hollywood in his version of Harlow) has made sure to people his film with an A-list of Hollywood royalty, many actors in the film having won in their time Oscars, Golden Globes, Emmys, Tonys, and Grammys. Russell Rouse’s direction doesn’t ever announce itself blatantly, and he overuses some well-worn tropes (frustrated women with tousled hair in bed after sex begging not to be left alone as Frank dresses to leave admiring his handsome mug in the mirror and ignoring them) and allows some of the wildly purple emotional monologues to get away from some of the more mediocre actors (Tony Bennett in his screen debut, Elke Sommer for whom English was not her first language). On the other hand, the narrative thrust of the story propels constantly forward keeping us engrossed in Frank’s machinations to win that Oscar and reestablish himself in the business culminating in a truly surprising turn of events at the Oscar ceremony.

It’s a diabolically juicy part for Stephen Boyd as the sleazy, selfish Frank Fane, but the character is so manipulative and loathsome that it’s to the actor’s credit that we stay invested in his story through the entire bizarre ride. Aside from Tony Bennett and Elke Sommer who both struggle on occasion with the film’s more dramatic extremes, the supporting players are really excellent. Milton Berle does outstanding dramatic work as agent Kappy Kapstetter, never once mugging or going for an easy laugh, and Eleanor Parker is equally wonderful as drama coach Sophie Cantaro who fights fire with fire after Fane stabs her in the back. Joseph Cotten as the embattled studio head has a brilliant scene at an Oscar party on Fane’s behalf, and Edie Adams as show biz bit player Trina Yale does some clever emoting as she plays her trump card late in the movie. Jill St. John’s dramatic performance early on as Frank’s stripper girl friend may be lackluster, but she does a mean striptease that leaves little to the imagination (hard to imagine the Production Code allowing this in earlier years, but it was gasping its last by 1966). And Peter Lawford has a memorable cameo in the film playing a once popular actor now reduced to maître d’-ing in a swank Hollywood restaurant, an eerie bellwether to Lawford’s own future in the business. Also on hand to add glamour and/or show biz authenticity to the proceedings are Bob Hope, Merle Oberon, Ernest Borgnine, Walter Brennan, Ed Begley, Broderick Crawford, James Dunn, Edith Head, Army Archard, James Bacon, and Hedda Hopper.

The liner notes trumpet a new 4K restoration, but the film has been oddly framed at 1.66:1 (1080p resolution using the AVC codec), and there are some light scratches through the middle of the image in a couple of obvious places. Otherwise, color is richly saturated and spot-on and sharpness is excellent apart from the flattering glamour close-ups achieved for the ladies by Oscar-winning cinematographer Joseph Ruttenberg.

The DTS-HD Master Audio 2.0 mono track is very good though the fidelity seems just a little muted from time to time. Dialogue has been well recorded and has been blended with Percy Faith’s lush and varied background score and the various sound effects to make a pleasing whole. There are no problems with age-related anomalies like hiss, crackle, flutter, or pops.

Audio Commentaries: there are two audio commentaries present on the disc. The more admirable of the two offers a reasoned and fair analysis of the movie by film historians Howard S. Berger, Steve Mitchell and Nathaniel Thompson. The more smug and haughty one pokes fun at the actors and the film headed by Patton Oswalt, Josh Olson and Erik Nelson.

Kino Trailers: Portrait in Black, Foxfire, A Farewell to Arms, Madame X, Female on the Beach.

Often overwrought dramatically but with an inarguably intriguing antihero for its focus and a first-rate production harking back to Old Hollywood, Russell Rouse’s The Oscar is worth seeing for star watchers or admirers of a certain period in Hollywood when a soapy narrative such as this could hold one’s attention effortlessly.

I've never seen this but have always wanted to. This was a blind buy for me! Thanks for the great review, Matt!
R

Seems like a very entertaining melodrama and well produced despite its overwrought moments. 2.5 as a rating seems pretty harsh from your review. 4.5 in video and 4.5 in audio seems awfully good to me despite a lack of bonus features. Unless you think the mediocrity of the film itself drags it down to this level. But your review makes it sound pretty enjoyable with more than camp appeal and with an excellent performance by Boyd.

My copy arrives this Sunday.

I watched this a couple of days ago and really enjoyed it. It ain't subtle but it's fun! As Matt suggests, it's possible that today's audience will be more appreciative than the film's contemporaneous one.

I agree about the actors except that I thought Elke Sommer was pretty good. I also agree the actresses looked great!

Does anyone have any insight as to why this aspect ratio was used for the transfer? 1.66:1 certainly wasn't used much, if at all, in the US in the 1960s.

So grateful to retire my dusty old VHS that I, um, liberated from Blockbuster many years ago.
You must log in or register to reply here. 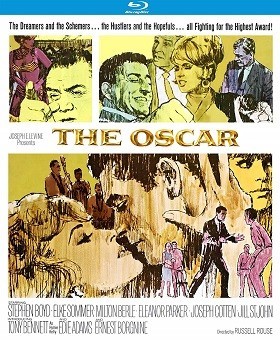