Forum List What's new Dark Style Change width
Log in Register
What's new Search
Menu
Log in
Register
Navigation
Install the app
More options
Dark Style
Close Menu
Posted on December 12, 2018 by Todd Erwin
You are using an out of date browser. It may not display this or other websites correctly.
You should upgrade or use an alternative browser.
Four Beloved Classics, One Forgotten 4 Stars

Five early Rankin/Bass Christmas Television Specials (four classic, one not so much) have been re-issued on Blu-ray with some new special features.

Nothing says Christmas like Rankin/Bass (well, Peanuts also comes to mind). Universal’s acquisition of DreamWorks Animation included ClassicMedia, which owned most of the pre-1973 holiday animated specials, and the studio has packaged five of their Christmas specials in The Original Christmas Specials Collection, spread out over four discs.

Rudolph the Red-Nosed Reindeer (5 out of 5)
It all started with Rudolph the Red-Nosed Reindeer when it premiered on NBC in 1964 as part of The General Electric Fantasy Hour, and established a formula Rankin/Bass would stick to for pretty much the entire history of the company: take a popular holiday song, build a musical around it with new and original songs, and feature quality animation (usually stop-motion puppetry) with some well-known voice talent. With Rudolph, the casting coup was Burl Ives as narrator Sam the Snowman, who would sing what would become almost instant classics Holly Jolly Christmas and Silver and Gold as well as the Gene Autry classic title track, all penned by Johnny Marks. Stop-motion animation of the puppets would be outsourced to MOM Production in Japan. The result was an instant classic, and has been broadcast annually ever since (the special switched from NBC to CBS in 1998) in several different versions. The cut included in this set has a running time of 51:36.

Frosty the Snowman (5 out of 5)
In 1969, Rankin/Bass would tell the story of Frosty the Snowman, this time using more traditional cel animation that would be outsourced to Mushi Productions in Japan. Jimmy Durante was brought in as the narrator, singing the title song, with Jackie Vernon as the voice of Frosty and utilizing the vocal talents of Paul Frees (Santa Claus, Traffic Cop, etc.) and June Foray (Karen – in the original broadcast, Teacher, etc.). For an animated special produced for television in the late 1960s, this is very high-quality animation that is often rich with detail and even uses the multi-plane technique in several shots. The cut included in this set is the one that has aired on CBS since 1970, which replaced June Foray’s voice as Karen with an uncredited child actress.

Santa Claus is Comin’ to Town (5 out of 5)
1970 brought Santa Claus is Comin’ to Town to the ABC network and a return to stop-motion animation. This would be, at the time, possibly the most star-studded cast in a Rankin/Bass production, featuring Fred Astaire as Postman (and narrator) S.D. Kluger, Mickey Rooney as Kris Kringle/Santa Claus, Keenan Wynn as Winter Warlock, and versatile Paul Frees voicing several characters including Burgermeister Meisterburger, Grimsley, various soldiers and townsmen, and the doctor (often having conversations with each other). Although produced six years after Rudolph, this is still a very lavish production with detailed and colorful sets, and tells an “origin” story for the mythical gift giver. This is the original broadcast version with a running time of 51:05.

The Little Drummer Boy (3.5 out of 5)
The Little Drummer Boy first premiered on NBC in 1968, telling the story of the young boy who plays his drum for baby Jesus. It has much of the same magic of earlier Rankin/Bass holiday specials, but the premise is stretched awfully thin and lacks a visual narrator that interacts with the story (Greer Garson, who tells the story, is never seen as a character). The production design is nowhere near as lavish as Santa Claus is Comin’ to Town or Rupolph, and the minor puppet characters are more simply designed. It is also a much darker tale with fewer laughs than previous specials, which may explain its sporadic broadcasts since its premier.

Cricket on the Hearth (2 out of 5)
I had never heard of this special prior to receiving this set, and having viewed it, I can understand why. Based on Charles Dickens’ other Christmas story, Cricket on the Hearth tells the story of a cricket that saves a toy maker and his blind daughter from an exploitative miser and was first broadcast in 1967 on NBC. It is bookended with a live-action introduction by Danny Thomas, who also voices toymaker Caleb, and features the voice talents of Marlo Thomas as blind daughter Bertha, Hans Conreid as the miser Tackleton, Roddy McDowall as Cricket Crocket, and Paul Frees lends his voice to several characters. Cricket on the Hearth doesn’t have a catchy holiday song to bring the viewer in, and the story itself is not a real audience grabber and is often dark and at times depressing. And the cheap cel animation (a major step down from Frosty) doesn’t help matters.

Rudolph, Frosty, and Santa are a nice improvement over the heavily compressed broadcast versions seen on CBS and Freeform. Colors are slightly more vivid and contrast is very good, offering deep blacks with minimal crushing. Fine detail is also very good, often revealing wires used in the animation and creases in the wallpaper on the set backgrounds.

The Little Drummer Boy appears to have been fairly neglected by its various rights holders over the years. The print used looks like a dupe from a poorly handled master. Colors are faded, detail is often lacking in darker sequences, and contrast is very poor.

Cricket on the Hearth appears like it was “restored” using the same method Disney often uses on its animated films. The image is very bright and film grain appears to have been almost completely scrubbed from existence. Colors are heightened, so much so that they appear unnatural and I did see some evidence of color bleed in a few shots.

Although Rudolph, Frosty, and Santa are presented on their discs with DTS-HD Master Audio 5.1 tracks, it is very obvious these were originally mono. There is a sense of a slightly wider front sound stage, but very little stereo separation and almost no surround activity. LFE is virtually non-existent. Dialogue is clear and understandable throughout and fidelity is excellent.

Restoring the Puppets of “Rudolph” (1080p; 3:40): Seamus Walsh and Mark Caballero discuss the restoration of the Santa Claus and baby Rudolph puppets.

Reimagining “Rudolph” in 4D (1080p; 10:54): A behind the scenes look at the making of the Rudolph the Red-Nosed Reindeer 4D theme park attraction film.

“Frosty the Snowman” Original Pencil Test (1080i; 1:04): A pencil test from the first minute of the special without audio.

Audio Commentary on Frosty the Snowman with Animation Historian Mark Evanier: Evanier discusses the Rankin/Bass formula, the animation process, and other tidbits of information.

Audio Commentary on Santa Claus is Comin’ to Town with Animation Historian Greg Ehrbar: Ehrbar discusses the casting choices, the artwork, and other Rankin/Bass trivia.

Nice review! Thanks. You finally convinced me to break down and buy these on blu.

I only have the Rudolph single that was released a few years ago, but this review is tempting...

It would be nice if they offered Little Drummer Boy and Cricket on a Hearth as a separate release for those that already bought the previous Original Christmas Specials on blu that didn't include those 2.

It's too bad that the special features don't have the alternate songs, other material and end titles for Rudolph. Most interesting was that the first broadcast on NBC did not have Santa going back to the Island of Misfit Toys to get the toys. Audiences complained and the producers filmed a new ending in which Santa picked up the toys; which resulted in editing previous material to accommodate the new scene. Saw a recent video on Youtube that showed all the differences over the years NBC, CBS and home video. Never realized all the changes that were made.

Thanks for the review. I just watched Rudolph on Blu-ray last night. I didn't really loop into these Rankin-Bass specials until a few years ago when my best friend (younger and who grew up with them) insisted I watch them. This is my favorite of the bunch.

I have The Original Christmas Classics Anniversary Collector's Edition BD that was released in 2015. It includes these five features, as well as Little Drummer Boy, Frosty Returns and Mister Magoo's Christmas Carol. I assume these are the same transfers for the repeat features, correct?
R

Would you happen to know if the sound mix on Little Drummer Boy has been fixed? In case you're unsure what I mean, the previous digital releases left out several crucial sound effects and at one point near the end ("And as Aaron looked at the babe...), Greer Garson's narration is replaced by a man for some unknown reasons. It is partially because of this snafu that I have been sticking with my old VHS of the special, which has the original, unadulterated sound mix.

Scott Merryfield said:
I have The Original Christmas Classics Anniversary Collector's Edition BD that was released in 2015. It includes these five features, as well as Little Drummer Boy, Frosty Returns and Mister Magoo's Christmas Carol. I assume these are the same transfers for the repeat features, correct?
Click to expand...

I think that version was an exclusive version released at Target or Walmart or somewhere like that. I have the 2015 release I bought on Amazon in 2016 and it only includes Frosty, Frosty returns, Santa Claus and Rudolph. It does not have Little Drummer Boy, Cricket on a Hearth and Mr. Magoo. I bought the individual release of Magoo's Christmas Carol separately.

Randy Korstick said:
I think that version was an exclusive version released at Target or Walmart or somewhere like that. I have the 2015 release I bought on Amazon in 2016 and it only includes Frosty, Frosty returns, Santa Claus and Rudolph. It does not have Little Drummer Boy, Cricket on a Hearth and Mr. Magoo. I bought the individual release of Magoo's Christmas Carol separately.
Click to expand...

I bought it at Amazon in December of 2015. It was released on 9/8/15, according to the data in my DVD Profiler database.

Scott Merryfield said:
I bought it at Amazon in December of 2015. It was released on 9/8/15, according to the data in my DVD Profiler database.
Click to expand...

Like Scott, I bought this same set with all six specials from Amazon back on December 12, 2015.
You must log in or register to reply here. 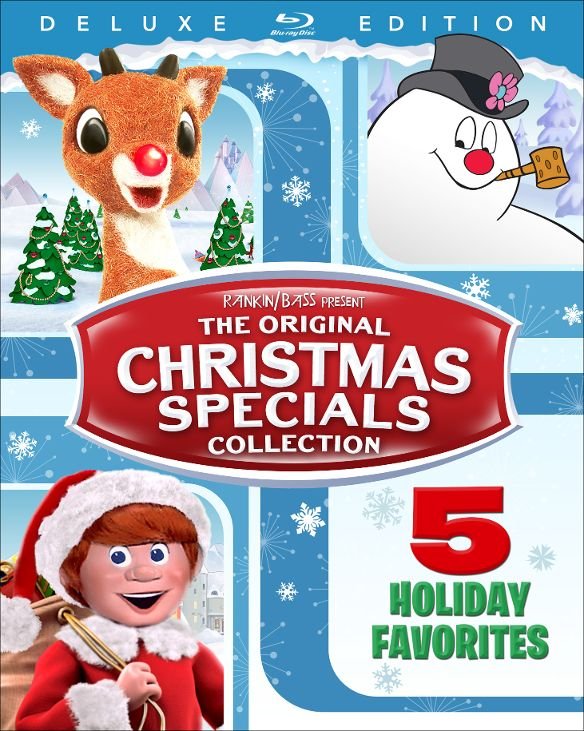