Disney’s The Nutcracker and the Four Realms looks and sounds great on 4K UHD Blu-ray, but the movie is half-baked and hollow.

On the first Christmas since her mother’s death, Clara Stahlbaum (Mackenzie Foy) receives a silver egg as a final gift from her mother, along with a note saying that inside is all you will ever need. One problem, the key to open the egg is missing. That is quickly solved when the creator of the egg, Drosselmeyer (Morgan Freeman), gives the kids their presents at the annual Christmas Eva party, where they must find their name tag on a string and follow it to its end. Clara does this, and quickly discovers she has been transported to another world, only to have a mouse steal the key from her and run off. Chasing the  mouse, she meets a bridge keeper, a Nutcracker soldier by the name of Philip Hoffman (Jayden Fowora-Knight), who then leads her through the Fourth Realm and arrives at the palace, where she meets the three regents of the land: the Sugar Plum Fairy (Keira Knightley) of the Land of Sweets, Shivers (Richard E. Grant) of the Land of Snowflakes, and Hawthorne (Eugenio Derbez) of the Land of Flowers. They tell Clara that her mother was Queen of the Four Realms, and since her mother’s disappearance, they have been at war with Mother Ginger (Helen Mirren), who rules the Fourth Realm (formerly known as the Land of Amusements). Sugar Plum Fairy also tells Clara that they need the key to a machine that will help them defend their lands from Mother Ginger. Clara takes a small army with her into the Fourth Realm to retrieve the key, but the Sugar Plum Fairy wasn’t completely honest with her, as the key is part of her diabolical plan.

It was fairly well-documented that Joe Johnston (Captain America: The First Avenger, The Rocketeer) was brought in to direct a large amount of reshoots, taking over for the film’s original director, Lasse Halstrom (The Cider House Rules, The Hundred-Foot Journey), who was not available as he was already directing A Dog’s Purpose, but did oversee post-production on The Nutcracker and the Four Realms. Unfortunately, those reshoots (reportedly 30 new pages of screenplay written by uncredited Tom McCarthy) did not solve many of the issues with the film, such as a story that is still difficult to follow, even though it borrows heavily from other stories, notably Alice in Wonderland, The NeverEnding Story, Chronicles of Narnia, etc. The cinematography by Linus Sandgren (La La Land) and production design by Guy Hendrix Dyas (Inception) is absolutely gorgeous, as are the visual effects supervised by Richard Clegg (Blade Runner 2049), and I did like the homage to Fantasia during the introduction of the main ballet sequence. That is also part of the problem – this is supposed to be based on or inspired by the classic ballet by Tchaikovsky and a short story my E.T.A. Hoffman, but there are very few and rather brief elements of both. In the end, The Nutcracker and the Four Realms is visually stunning, but rather forgettable.

The Nutcracker and the Four Realms was photographed on 35mm and 65mm film, completed as a 2K digital intermediate (according to imdb.com). Disney’s 4K UHD Blu-ray delivers a gorgeous 2160p HEVC-encoded transfer with HDR10 high dynamic range that retains the film’s theatrical aspect ratio of 1.85:1. Compared to the included 1080p Blu-ray, the colors may appear a bit more subdued on the UHD at first glance, but the HDR10 and the format’s wider color gamut use the less vibrant colors to reveal more noticeable depth in those colors. Contrast is greatly improved, allowing for deeper blacks and more refined shadow details. Detail overall gets a nice uptick, revealing deeper textures in fabrics and more perceived depth in many of the wider vista shots. Film grain is present and organic, never distracting.

The Dolby Atmos track, exclusive to the UHD Blu-ray, is a subtle improvement over the DTS-HD Master Audio 7.1 track found on the Blu-ray edition. As with most Disney Atmos mixes, unfortunately, you will need to punch up the volume a few notches to get it closer to your normal listening level. Once that is completed, the track provides a more immersive experience, although I did not detect any discrete overhead sounds. What the track does provide is more precise placement of sounds within the viewing environment and using the overhead speakers to provide more ambience. LFE is good, and could be a bit stronger, but not nearly as anemic as some of Disney’s earlier UHD releases. Dialogue is clear and understandable throughout.

Unwrapping “The Nutcracker and the Four Realms” (1080p; 7:08): A very by-the-numbers EPK behind the scenes feaurette.

Digital Copy: An insert contains a code to redeem a digital copy (in UHD where available) on Movies Anywhere. The insert also mentions that redeeming the digital copy also gives you access to an additional special feature, Unwrapped: The Visual Effects of “The Nutcracker and the Four Realms” on select platforms.

The Nutcracker and the Four Realms looks and sounds great on 4K UHD Blu-ray, but the movie itself is largely forgettable.

Here's an interview with the Academy Award winning costume designer for the film, Jenny Beavan (who was an absolute delight)!
https://www.hometheaterforum.com/co...beavan-the-nutcracker-the-four-realms.360689/
Expand signature
"Equipped with his five senses, man explores the universe around him and calls the adventure Science" – Edwin Hubble 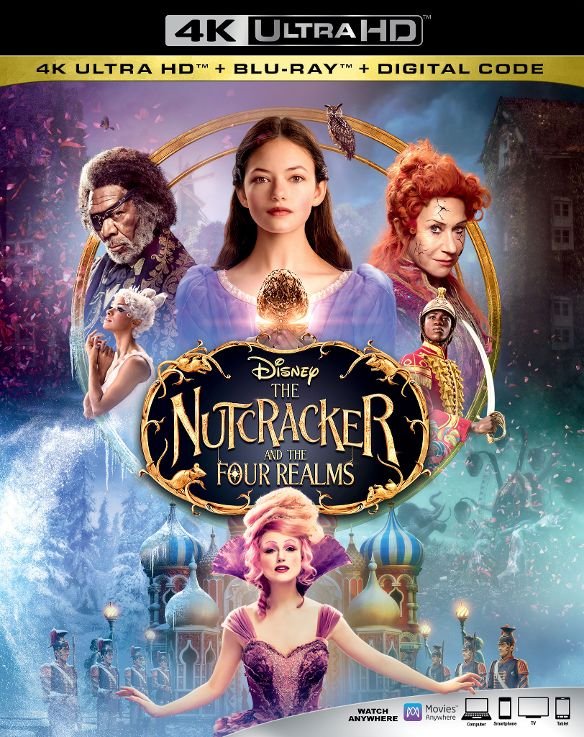