Forum List What's new Dark Style Change width
Log in Register
What's new Search
Menu
Log in
Register
Navigation
Install the app
More options
Dark Style
Close Menu
Posted on March 15, 2020 by t1g3r5fan
You are using an out of date browser. It may not display this or other websites correctly.
You should upgrade or use an alternative browser.
Get Smart adaptation debuts on Blu-ray 4 Stars

In the 1960’s, comic geniuses Mel Brooks and Buck Henry created one of the decade’s most memorable TV shows, Get Smart; it was a sendup of the many spy themed movies and TV shows, but it was played straight, which added to the many laughs and gags. A decade after the show ended its run, Agent 86, Maxwell Smart, finally made his feature film debut with The Nude Bomb. Previously released on DVD by Universal, Kino has licensed for Blu-ray release as part of their Studio Classics line.

Would you believe that KAOS has a plan to rule the world by dropping bombs capable of destroying all fabric, rendering everyone on the planet nude? Agent 86, Maxwell Smart (Don Adams), does, and is tasked by the chief of PITS to take on the case to stop this potential worldwide crisis. Aided by three lovely agents and a team of experts, Agent 86 travels across the world (even making a stop at Universal Studios!) to stop KAOS from following through on their threat to decimate the textile industry across the world, leaving millions of people hanging by a thread!

Though it arrived about a decade after the show ended its run, The Nude Bomb is a straight forward adaptation of the TV series that first gave life to its memorable characters. While the show’s original creators Mel Brooks and Buck Henry were unavailable to assist in bringing Maxwell Smart to the screen (as they were busy working on other projects), director Clive Donner and screenwriters Arne Duncan, Bill Dana and Leonard Stern do a good job in retaining the spirit of the show and staying true to the formula, with some notable exceptions. The absence of Barbara Feldon as Agent 99 in addition making Maxwell a bachelor and the addition of some swearing have been notable bones of contention for fans of the series; the second act taking place at Universal Studios was also derided at the time as a shameless self-promotion for the studio (although it plays better now). Although a bit uneven and sometimes not quite generating the frequent number of laughs as one episode of Get Smart, The Nude Bomb still manages to hit its targets often enough to make it a pleasing film adaptation of the series.

Reprising his signature role after ten years, Don Adams is in fine comic form as Maxwell Smart (Agent 86); his performance was widely singled out among reviewers as the best thing about the movie during its initial release. Taking on a dual role here, Vittorio Gassman is notable as the Blofeld-like leader of KAOS and the foppish fashion designer behind the nude bomb plot; while he was noted for performances in Italian comedies like Il Sorpasso (1962) and Woman Times Seven (1967), this was a notable diversion from the more prestigious parts he had in the past. Filling for Barbara Feldon here, Andrea Howard is a nice counterpart to Maxwell as Agent 22; co-stars Sylvia Kristel (yes, Emmanuelle herself) and Pamela Hensley are also notable as the bombshell agents 34 and 36, respectively. Also worth mentioning here are Dana Elcar as the chief (succeeding Edward Platt, who died a few years before this movie went into production), Robert Karvelas as Larabee (the only other cast member other than Adams to reprise his role from the TV series), Norman Lloyd as a security chief for PITS, Gary Imhoff and Sarah Rush as twin scientists, Joey Forman as Agent 13 (filling in for Dave Ketchum; Forman played Harry Hoo in the TV series) the film’s co-writer Bill Dana as the fashion designer Jonathan Livingston Seigle, and Rhonda Fleming as the socialite Edith von Secondburg.

The film is presented in its original 1:85:1 aspect ratio for this release. Film grain is organic throughout, with fine details and colors faithfully represented as well. There’s very little in terms of issues like dirt, scratches, tears or warping present, making this likely the best the movie will ever look on home video and an improvement over the previous Universal DVD.

The film’s original mono soundtrack is presented on a DTS-HD Master Audio track for this release. Dialogue is both strong and clear along with the original sound mix; Lalo Schifrin’s score is also given clarity, ambiance and fidelity without intruding upon the dialogue. There’s no problems like distortion, crackling or hissing present, which means that this is likely the best the movie will ever sound on home video and is another improvement over the Universal DVD.

Commentary by Sledge Hammer! creator Alan Spencer – Newly recorded for this release, Spencer talks about the movie as well as his relationship with Don Adams, to whom he was an assistant to during the film’s production; a very informative as well as entertaining track.

Commentary by film historian/critic Peter Tonguette – Also recorded for this release, Tonguette fills in some of the production details not covered by Spencer; informative, although he does spend a little too much time talking about Buck Henry beyond his noted absence here.

Deleted/Extended/Alternate Dialogue Scenes (28:37) – A series of scenes from the TV version of the movie, entitled The Return of Maxwell Smart. Since a master copy of the TV version wasn’t available, the scenes were taken from a standard definition source.

Trailers from Hell with Alan Spencer (3:20)

While it made some notable deviations from its original source, The Nude Bomb is still an entertaining follow up to Get Smart, with its star in top form. Kino has done a great job in bringing the movie to Blu-ray, with solid marks in both visual and audio presentation as well as a decent slate of special features, including two solid commentary tracks and rarely seen deleted scenes. Highly recommended.

Viewed the disc with the Alan Spencer commentary which was very informative. A goofy movie with some funny moments but one misses Barbara Feldon. Vittorio Gassman gives a notable performance as does Don Adams.

I didn't think it was all that great when I saw it during its original release at the age of 11 - I can't imagine it's improved over time.

Get Smart is one of my favorite tv comedies from that era. I bought a used VHS of TNB around the time the complete series DVD set came out and have never watched it again. I found the 1989 special much better. But I may actually pick this up for those commentaries. Could be interesting.

The commentaries are about the only reason I'd feel tempted to get it. Without Feldon, changing CONTROL to PITS and not giving us Max's classic KAOS nemesis, Siegfried, the film has always seemed like an alternate universe Maxwell Smart. The 1989 TV movie "Get Smart Again!" thankfully washed the bad vibe of this movie out (though the mid-90s short-lived TV series undid that save for the Siegfried episode).

I forgot about the 1995 series. I was curious to watch it, even though I’m sure it would be horrible. It got a DVD release IIRC. But I never got around to it. It’s the only GS-related thing I still haven’t seen.

The Siegfried episode is worth a look (and especially for one hilarious line from Siegfried's daughter) but you can ignore every other part of it.

For Rhonda Fleming completists only.

It should be noted that it was originally intended to be R-rated, with actual nudity and also a few satiric shots at then-candidate Ronald Reagan. But Universal got cold feet on both topics and butchered the film. Some years ago I asked Mike Feinberg at Universal if the trims survived. He checked and sadly reported that they hadn't.
You must log in or register to reply here. 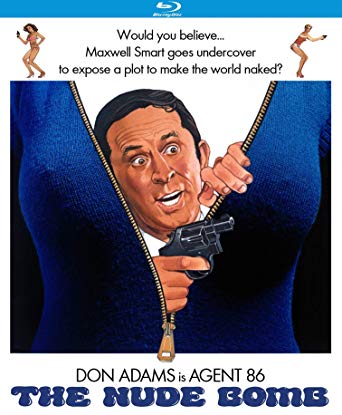