The Night Strangler, Dan Curtis’ 1973 follow-up to the enormously popular ABC Movie of the Week The Night Stalker has been released by Kino Lorber in a beautiful new 4K transfer.  This will unquestionably please Kolchak fans because it is hard to imagine this movie looking any better.  But for casual fans it doesn’t compensate for a lackluster script and weak direction that is mostly a rehash of the much better original production.

The Night Stalker premiered on ABC’s Tuesday night Movie of the Week on January 11, 1972.  Produced by Dan Curtis with a script by Richard Matheson, The Night Stalker was directed by journey man John Llewellyn Moxey, who helmed Amicus’ first horror movie, the atmospheric City of the Dead – in the US, Horror Hotel.  The Night Stalker featured a remarkable cast for a TV movie with Darren McGavin as newspaper reporter Carl Kolchak, Simon Oakland as his editor Tony Vincenzo and Carol Lynley, Ralph Meeker, Claude Akins, Charles McGraw, Kent Smith, Barry Atwater, and everybody’s favorite fall guy Elisha Cook, Jr. in supporting roles.  It was ratings bonanza getting a 33.2 rating and 54 share in the Neilsen ratings.  It was at the time ABC’s highest rated made for television movie.  A sequel was inevitable.

The Night Strangler premiered on Tuesday, January 16, 1973.  This time Dan Curtis directed as well as produced and Richard Matheson again wrote the script.  McGavin (sporting a ridiculous and distracting red toupee) and Oakland returned and the supporting cast while being good, though not quite as good as the original, featured Jo Ann Pflug, Scott Brady, Wally Cox, John Carradine, Margaret Hamiliton, Al Lewis, and Richard Anderson as the killer.  It too, was a ratings hit, but plans for a third installment were scrapped and replaced with a weekly series that ran for one season that has since acquired a cult following.  Curtis was not involved with the series.

I was ten years-old when The Night Stalker first aired and immediately was a big fan.  McGavin quickly became one of my favorite actors – I still enjoy watching him and find him to be an underrated actor.  I have seen it three or four times in the intervening 45 plus years and still enjoy it.  I believe it holds up well.  By the time the series premiered (I think it aired on Friday nights) I was already hanging out with friends, mostly going to movies at quickly disappearing neighborhood theaters and never saw an episode until recently.  What I’ve seen is fun, though ultimately unsustainable as a weekly show given that it is mostly tied to one location.  I think it would have worked far better in a format similar to NBC’s rotating mystery movies.

I was very excited about The Night Strangler but remember being disappointed even as an eleven-year-old.  I’ve seen it a couple of times since 1973 and my thoughts about it, if anything, are more critical than they were at the time.   I’ll cut to the chase and say that I think the flaws are in both the direction and script.

Richard Matheson wrote the screenplay to The Night Stalker based on an unpublished novel by ex-reporter Jeff Rice.  The Night Stalker was part of a trend of early 70s modern day vampire movies (The Count Yorga movies, The Blacula movies, Dracula A.D. 1972, The Satanic Rites of Dracula).  The Gothic Victorian era vampire movie had grown tired with Hammer cranking out at least one a year each with diminishing results, so I can understand the impulse to change it up.  But unfortunately, with the exception of The Night Stalker and the first Blacula movie, most of these updates are not successful movies – I think part of this is because as period pieces the gothic and supernatural themes were easier for audiences to suspend their sense of disbelief – “this couldn’t happen today!”.  And second, it’s not enough to just take a Dracula-like character and plop him into a contemporary setting.  There has to be a reason for it and I think The Night Stalker and Blacula are more successful at addressing this with Blacula presenting audiences with the novelty of an African vampire.

The Night Stalker takes place in Las Vegas.  1970s Las Vegas is the antithesis of Victorian Gothic (strangely it has developed its own bizarre brand of Gothic over the past nearly half century – maybe it’s time for another vampire movie set there?), but is interesting in that Las Vegas, like a vampire comes to life after dark.  Seems logical for a vampire to work that beat (in comparison The Night Strangler’s Seattle location seems arbitrary).  And structurally The Night Stalker is not a conventional horror movie as much as a newspaper reporter procedural crossed with a horror movie.  This was a unique approach at the time.

Kolchak is the center of the movie, not the vampire.  I think the mistake Hammer made with the Dracula sequels was that they should have focused on Van Helsing hunting vampires around the world, with an occasional reappearance of Dracula, instead of wasting time reviving Dracula each outing, which is repetitious and eventually comic.  Stoker’s novel is never from Dracula’s point of view.

The Night Strangler, according to Tim Lucas in his richly detailed commentary, gave scriptwriter Matheson difficulty.  What kind of monster/villain would work?  Matheson’s first idea was an ageless Jack The Ripper.  But that idea proved to be too close to Robert Bloch’s Thriller episode, Yours Truly, Jack the Ripper.  It was soon decided to have what Lucas calls the original idea of having a doctor who has found a formula that uses the blood of young women to prolong life – the problem is that the formula is not permanent, and he has to murder women every 21 years to stay alive.  This sounds to me a lot like 1945’s The Man in Half Moon Street and its 1959 Hammer remake, The Man Who Could Cheat Death.

You take away the scientific mumbo jumbo and it could be a vampire because the villain still needs blood to survive and thus the sequel seems like a rehash of the original.  There is more emphasis on comic interplay in this outing.  Most of the comic dialogue is flat and I’m not sure that the cast is getting much help from director Curtis.  Good actors like McGavin and Oakland rely on blustery mannerisms to sell the retreaded material.  The other cast members have little to work with and seem cast just because they fill a type – Jo Ann Pflug is the adorable daffy, scatterbrained dancer/college student, Virgina Peters is the butch lesbian (surprisingly ugly depiction for a television movie of the era).  Matheson was a good and prolific writer of genre fiction and screenplays (I, Legend, The Incredible Shrinking Man, House of User, several Twilight Zone episodes, Burn, Witch, Burn, The Devil Rides Out) where often ideas take precedence over character.  Take the case of Richard Anderson’s character, the whole movie is a build-up to his reveal and when it comes, he isn’t given anything worth saying.  I don’t think dialogue was one of Matheson’s strengths.

Dan Curtis, who Lucas reports had an employee dedicated to seeking out horror related material, shows for a talent so associated with a genre little affinity for it.  Dark Shadows may be his legacy and his one stroke of genius as it does seem like an eccentric idea for a daytime soap opera that may have been decades ahead of its time.  Daytime production values in the mid 1960s were so crude that there was no way that it could have done justice to the ambitions and themes of the show.  Video production even on the network level produced inferior looking product and I think that is the biggest impediment to Dark Shadows.

As a director Curtis’ work always seems pedestrian to me and The Night Strangler is no exception.  Lucas points out similarities between Curtis’ work on The Night Strangler and that of Italian great, Mario Bava, particularly in the Seattle underground sequences.  Yes, there are colored gels and cobwebs and lots of shadows all in deep focus and even a few camera moves, but it never seems to come to life as it does in a Bava picture.  I can’t think of one Dan Curtis directed movie that excites me the way even weak Bava does – though it has been a long time since I’ve seen the Dark Shadows features.

As I write above, Curtis doesn’t seem particularly interested in working with actors as most rely on mannerisms to get by.  I wonder if this wasn’t one of the reasons for the reported tensions between McGavin and Curtis during production. Scott Brady barks his way through his role while John Carradine gives his stock waspy patrician performance as the newspaper publisher (The Last Hurrah).   It looks like Wally Cox was just told to be Wally Cox.  Perhaps one of the reasons of the first film’s success is that Moxey is a better director than Curtis?

The movie is well photographed by veteran Robert B. Hauser.  The new transfer highlights his work which is very good considering that it was designed to be seen on displays no larger than 26-inch diagonal CRT screens.  The exteriors, particularly the first scene with McGavin and Pflug look like they were shot yesterday.  Hauser also pushes contrasts with some scenes being shot in near darkness.  Hauser’s work is the best thing about the production.  Production design by Trevor Williams and special effects by Ira Anderson, Jr. should also be noted as they are very good for a television movie of this vintage.

Finally, the version here is the 90 minute overseas theatrical version.  Lucas states that this is the only version currently available.  The Night Strangler originally aired at around 74 minutes.  I don’t think the extra footage does the movie any favors as I think the shorter version would not seems so slack, improving the pace and give the film a greater sense of urgency.

The Night Strangler is presented in its original television aspect ratio of 1.33:1.  The packaging proclaims it is a new 4K restoration.  It does not state if it is off of the camera negative or not.  It looks great with colors, blacks, textures looking better than I have ever seen them look on this title.  Grain is visible – in some scenes more than in others.

Audio is DTS-HD 2.0 and is clean and clear and of course it sounds better than the original broadcast.  It doesn’t say if there has been any audio restoration performed.

Extras are a little light and include:

A new audio commentary by film historian and writer Tim Lucas.  As I wrote above, this is a thoroughly researched and detailed commentary.  It makes me want to go back and listen to Lucas’ Bava commentaries.  He gives abundant historical background about this production and the other Kolchak vehicles.  I think he stretches when he says things like Matheson’s scripts (particularly The Black Cat segment from Tales of Terror, and The Comedy of Terrors) are highlights of 1960s American comedy cinema.  This is subjective, but Billy Wilder, Blake Edwards, Jerry Lewis, Mel Brooks, and Woody Allen were working in the 1960s and I don’t think Matheson compares well with them.  But 90 minutes is lot of time to talk and there aren’t any real dead spots in Lucas’ commentary.  The film includes subtitles.

And an essay by film critic and author Simon Abrams which is slight but informative.

I hate to be a wet blanket and feel like a Monster Kid traitor but I found with the exception of the professionalism of the cast, particularly McGavin and Oakland and the photography, The Night Strangler was dull this go around.  Maybe I’ll like it more next time?  But if you are a fan of the movie, Kino Lorber has delivered a knock-out transfer, one that will unlikely be topped any time soon. 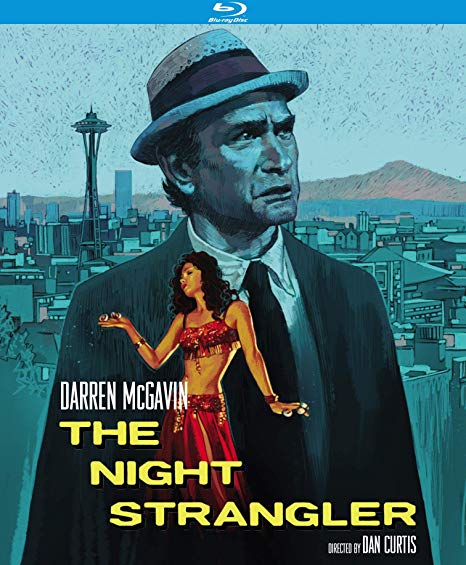