The Night Stalker comes to Blu Ray from Kino from a 4K scan that makes this ever popular tv movie look better now than it did when first broadcast in 1972.  It’s hard to imagine that it was first shown on ABC over 45 years ago!  It was the only made for television movie I remember being discussed the next day at my elementary school in the same way weekend horror matinees were talked about on Monday mornings.  Carl Kolchak became an instant hero.

Ex-big-city newspaper reporter Carl Kolchak (Darren McGavin) has literally been banished to the desert – Las Vegas.  Kolchak resents his exile and itches to get back to the big leagues.  Editor Tony Vincenzo assigns Kolchak to a routine murder case.  At the location where the body has been dumped Kolchak encounters Sheriff Butcher (Claude Akins) and it is revealed that the body has apparently been thrown at least 20 feet into an undisturbed sand pit.  And the victim has been drained of a considerable amount of blood.  This isn’t so routine after all!

Another four women are similarly murdered and a fifth is missing.  There’s also been a series of raids on local hospital blood banks.  Are these incidents related?  Is this a psychopath who thinks he’s a vampire or the real thing and is it Kolchak’s ticket back to the big leagues?

The Night Stalker aired on ABC’s The Movie of the Week on January 11th, 1972 (erroneously listed as 1974 in the included essay by Simon Abrams).  It was a phenomenal Neilsen ratings hit scoring a 33.2 rating – 54 share rating.  It’s estimated that it was viewed by over 70 million viewers, approximately a third of the nation!

The Night Stalker succeeds where the others fail for a number of reasons.  One being that the others, particularly the Hammer films, are desperate and cynical attempts to cash in on tired material without injecting anything new.  The first Blacula, in spite of the silly title is the only other interesting movie of this cycle, gives two reasons to watch; an African vampire and the regal and sympathetic performance of William Marshall in the title role.

The Night Stalker takes place in Las Vegas.  I think this is stroke of genius on the part of Jeffrey Grant Rice, the author of the original unpublished story.  Las Vegas is a tourist town built on vice where visitors and residents come and go unnoticed.  It’s a town that, like a vampire, comes to life after dark.  The vampire preys on showgirls and prostitutes.  There is a clever scene of the vampire walking unnoticed through a casino of zombie-like gamblers.  Both vampire and gambler are intensely stalking their prey, hoping to hit the jackpot, too absorbed to notice one another.  Anything and everything can and does happen in such environments.

The Night Stalker’s Janos Skorzeny (Barry Atwater) is a vampire in the traditional sense and can be killed by daylight and weakened by brandishing religious artifacts.  But the most interesting element introduced in The Night Stalker is the introduction of due process to the genre.  This touch moves the genre from the religious struggle of good against evil to the secular modern-day question of legal or illegal.  Interestingly the cross that Kolchak wields is not a crucifix as it is missing the Christ figure.  If such as thing as vampire existed in contemporary America, what rights would it have?

The merging of the ‘newspaper’ genre with the ‘vampire’ genre is a welcome addition.  Kolchak is not a religious figure concerned with good versus evil.  He is a newspaper reporter concerned with truth.  The suppression of the truth is the main conflict of the movie.  Kolchak fights with Vincenzo about “the facts.”  Like Kirk Douglas’ character Chuck Tatum in Billy Wilder’s Ace in the Hole, Kolchak knows his name on this byline will pay off like a slot machine.  But unlike Tatum, Kolchak is not so corrupt to prolong the story for his own benefit.  Kolchak wants to crack the story to embarrass law enforcement – Kolchak’s sin is that of excessive ego. Along the way, Kolchak butts heads with every law enforcement official he encounters including the District Attorney, the Las Vegas police chief, the above mentioned Sheriff, as well as his own friend Federal Agent Bernie Jenks.

Because Las Vegas is a town whose economy is based on tourism, the city is anxious to keep any talk of a vampire (or serial killer) under wraps.  This is similar to the subplot of the conflict between Sheriff Brody and Mayor Vaughan in 1975’s Jaws.  Kolchak and Brody want to protect/inform the public while the establishment wants to suppress information in order to protect business.  Kolchak sees this story as his ticket out of Las Vegas and ironically it is, just not the way he envisions.

Some thought I was a little too hard in my review of sequel The Night Strangler.  It was interesting watching these two movies in reverse order within a month of each other.  The Night Stalker has a wonderful cast, perhaps as good as any assembled for a what was considered a routine TV movie – Ralph Meeker as FBI man Jenks, Kent Smith as District Attorney Paine, Claude Akins as Sheriff Butcher, Carol Lynley as Kolchak’s girlfriend Gail, Charles McGraw as Police Chief Masterson, Barry Atwater as the vampire, and of course, Elisha Cook, Jr. as Kolchak informer Mickey Crawford.  All deliver good and credible performances whereas the performances, also from a good cast, in The Night Strangler are broader and more cartoonish.

John Llewellyn Moxey’s direction is precise and efficient.  Moxey directed a few feature films, including Amicus’ first horror gem, The City of the Dead.  Moxey understands scare effects and how to mount tension.  He knows what to show and what not to show.  When to use music and when to let the action unfold silently.  Moxey was a very prolific television director in both England and the US for over 30 years.  He knows how to keep a story moving.  The Night Stalker is 15 minutes shorter than The Night Strangler and it makes a big difference as it never feels flabby or padded as Strangler sometimes does.  Because Moxey was working in television it is interesting to look at his credits and see all the up and comers he worked with (Michelle Pfeiffer) as well as golden age stars at the end of their careers (Barbara Stanwyck).  I’m sure he has lots of stories he could tell.

And there are several moving moments in The Night Stalker, one is of a murdered girl’s parents at a crime scene and there are three with McGavin towards the end of the movie.  The first is when Vincenzo knowing what Kolchak is walking into and covertly saying good-bye, tells him that he a good reporter – Kolchak doesn’t know how to respond, the next is when Kolchak is informed that his girlfriend has been asked to leave town, and the third is when Kolchak’s friend Jenks, almost in tears, tells him there is nothing he could do to change the outcome. The Night Strangler is devoid of such moments.

Kino has released The Night Stalker in a new 4K scan.  The packaging says it’s a restoration and the disc looks great, much better than I have ever seen it look either on broadcast or previous video releases.  Colors are bright, and blacks are deep.  There are lots of scenes at night or in dark places and these scenes look good.  The image looks cleaned up as I don’t recall any marks or scratches.  Grain is present and natural looking with night scenes heavier than daylight or studio shot scenes.

The audio is DTS-HD Master 2.0 and is very good.  Dialogue, sound effects, and music are clear.

Kino has included a good number of extras:

A new audio commentary by Tim Lucas.  Like his Night Strangler commentary, Lucas packs in lots of information along with interpretive asides.  Lucas is remarkable in delivering details about the production, bios and production facts.  He identifies nearly everybody who appears on screen.  He tells a wonderful story of American International Pictures threatening a law suit after learning of the production.  AIP claimed that the story was similar to a property they owned for a number of years.  The property turns out to have been written by Richard Matheson, who was not involved with the law suit.  It was eventually dropped.  Lucas works hard at giving The Night Stalker cultural context.  I think he sometimes stretches, but even when he does, his readings are plausible.  Aside from those minor quibbles, it’s a very good and informative commentary.

There are two new interviews with director Moxey and composer Robert Cobert.  Both gentlemen are in their mid 90s.  Both tell entertaining stories about the production.

There is an older interview with Dan Curtis.

A good essay, aside from the probable above mentioned typo, by film historian Simon Abrams.

And finally, a trailer for the theatrical feature, Burnt Offerings which looks a lot funnier than I remember it being when I first saw it in the 1970s.

The Night Stalker is about as good as a television movie of the early 1970s can be.  Everything clicks in The Night Stalker, script, performances, photography, music, and direction.  It also struck me for the first time during this viewing that scenes including both Darren McGavin and Ralph Meeker have the distinction of featuring two of the three actors who played Mike Hammer in the 1950s.  This blu-ray is so heads above what existed before that I noticed a few things I hadn’t noticed before including a sign in front of the Sahara Hotel advertising an appearance by Johnny Carson and Doc Severinsen (pointed out by Tim Lucas in his commentary), but more importantly, appearing at the same hotel is the comedy team of Steve Rossi and Slappy White.  What I wouldn’t give to have seen that act!

Timothy, thank you for the terrific review.
Reactions: TravisR and Timothy Bodzioney

After having watched this projected in HD, it's hard to imagine some of the original audience watching this on a 13-inch CRT.
Reactions: Darby67, TravisR and Timothy Bodzioney

I remember watching this the night it aired. Movie scared the crap out of me. Now I love it for its charm and McGavin's scruffy, lovable portrayal of Kolchak. Another great script by the incomparable Richard Matheson.
Reactions: Darby67 and TravisR
You must log in or register to reply here. 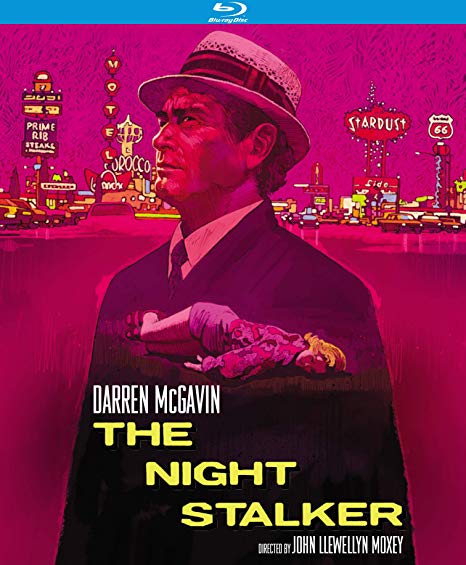