Forum List What's new Dark Style Change width
Log in Register
What's new Search
Menu
Log in
Register
Navigation
Install the app
More options
Dark Style
Close Menu
Posted on September 21, 2021 by Timothy E
You are using an out of date browser. It may not display this or other websites correctly.
You should upgrade or use an alternative browser.
This seminal film finally receives its proper due in high definition. 5 Stars 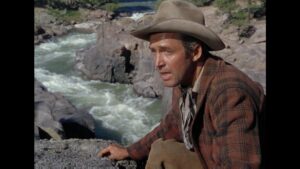 Howard Kemp(James Stewart) is a bounty hunter tracking wanted killer Ben Vandergroat(Robert Ryan). Kemp meets a prospector on the trail, Jesse Tate(Millard Mitchell), and offers him $20 in 1868 dollars to lead him to where Vandergroat was last seen. Before long, they are joined by dishonorably discharged Union soldier Roy Anderson(Ralph Meeker), who follows along on a whim and ultimately helps Kemp capture the wanted killer. Along with Vandergroat is Lina Patch(Janet Leigh), the daughter of Vandergroat’s former partner in crime. 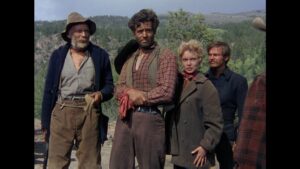 Vandergroat discloses that he has a bounty on his head after he is captured, with the result that the reward sought by Kemp becomes shared three ways with Jesse Tate and the man who helped capture the killer, the disgraced soldier Anderson. The garrulous Vandergroat knows exactly how to manipulate people, and attempts to play on the greed of his captors by pointing out that “Money splits 2 ways much better than three” in his efforts to play them against each other and make his escape. 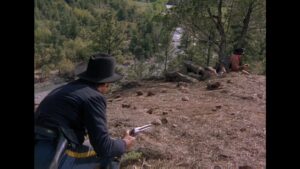 The party’s efforts to return Vandergroat for the reward gives them each an opportunity to become better acquainted with the character of their fellow travelers, for better and worse. Tate, the prospector, has a dishonest streak, and the disgraced army soldier played by Meeker is no better. Kemp has been damaged emotionally by a woman who sold his ranch and ran off with another man while Kemp was fighting in the war between the states. James Stewart is excellent in his role of a disillusioned man who has lost his way. Janet Leigh plays her divided loyalties with flourish as she seemingly struggles between Vandergroat’s selfishness and Kemp’s decency. Ralph Meeker plays a scoundrel perfectly, and Millard Mitchell is likewise perfect as a prospector willing to cut some corners to financial success. Robert Ryan plays Vandergroat as a shameless opportunist capable of talking his way in and out of almost anything. 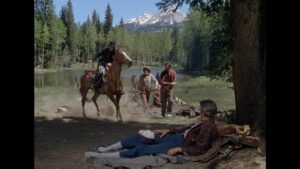 Anthony Mann(Raw Deal) directed The Naked Spur, one of seven films that he produced with James Stewart, and there is not a stinker in the bunch. (This is one of five westerns in which Stewart collaborated with Mann, and each one deserves to be seen at least once.) The story and screenplay by Sam Rolfe, later of Have Gun, Will Travel, and Harold Jack Bloom(The Man from U.N.C.L.E.) was nominated for the Academy Award but lost that year to Titanic. (Some things never change.) The dynamic of a charismatic prisoner trying to manipulate his escape has been done before and since, but rarely as well, and the actors’ performances and the screenplay make for an entertaining and fast moving 92 minutes of film. 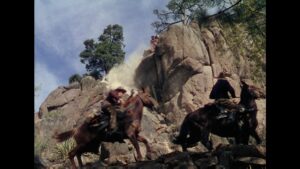 Although cinematographer William C. Mellor was not nominated for his work on this film, the compositions of staging and movement on the screen are sublime in The Naked Spur. This is one of those films in which the movement proceeds so smoothly and adeptly that makes the cinematography too easy to be taken for granted. The stills featured with this review do not do justice to the visual artistry of this film, even as it is enhanced by filming on location in the San Juan Mountains and Durango, Colorado. The Naked Spur is one of a number of classic films that has been recognized for its artistic merit as being culturally, historically, or aesthetically significant that was added to the United States National Film Registry in 1997. The Naked Spur stands as a seminal western and a fascinating rumination into greed and redemption. 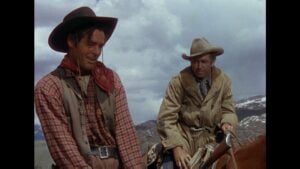 The Naked Spur appears on Blu-ray (at long last!) in its original 1:37.1 screen aspect ratio. This transfer is a revelation since every earlier rendition on home video has suffered from poor contrasts and color as well as registration errors baked in from the original three-strip technicolor. The clarity of the screen images is sublime, with nice fine detail perceptible as well as gradations of depth in shadows and blacks. Colors appear faithful and true to a three-strip technicolor feature produced in 1952.  The visual splendor of this feature is certainly enhanced by the location filming in Durango, Colorado and the beautiful San Juan Mountains. 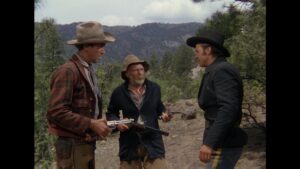 The default audio is English DTS-HD 2.0 mono.  There is surprising dynamic range packed into this seemingly modest audio with gunfire carrying some punch to it.  Dialogue is always crisp and clear over music, sound effects, and the occasional sounds of running water.

Things We Can Do Without(8:50)(SD): A Pete Smith novelty short from 1953 narrated by a Smith named Pete.

Theatrical Trailer(2:44)(SD): An original theatrical trailer for The Naked Spur from 1952.

The short films included on this disc were released later in the year than the feature film, but do represent what you might have seen if you watched this film in a movie theater in late 1953.

I always appreciate whenever Warner Brothers supplements their classic features(this one from MGM) with a “Night At The Movies” approach which includes short films that might have been seen with the feature film at the time of its release.  Studios should do this with every classic film if they also have ownership of, or can license, the relevant short films.  It is always a glaring error when studios fail to port these shorts over to Blu-ray when they were included originally on the DVD.  (Objective, Burma! is a good example of this failing.)  Note to studios:  please continue to include these classic film shorts with the feature films whenever possible. 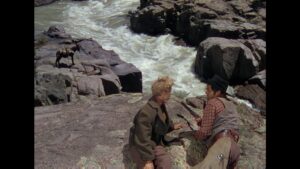 The Naked Spur is an excellent western actually filmed on location with a fine cast of actors at the top of their game.  The Naked Spur has never looked better on home video than it does on this Blu-ray disc, and the film shorts from the same era which are included as special features are a nice touch.  If you like this film, the other 6 collaborations between director Anthony Mann and Jimmy Stewart(4 of which are also westerns) are highly recommended as well.

Silence of the Lambs 30th Anniversary

It had been many years since I last saw The Naked Spur. This time around, I really appreciated how perfect Ralph Meeker was in playing his role as a disreputable, dishonorably discharged Union soldier.

If The Naked Spur had been remade for its 50th anniversary, I could easily have imagined Bill Paxton playing the same role, as he was so amazing at playing these types of seedy characters.
M

From the opening credits forward we knew we were in for something special. We had no idea the film was this gorgeous!
S

this is such good news, I had pre ordered but sadly needed to buy TEACHER INSURANCE this month, so gotta wait till next payday, but am happy knowing its a wonderful transfer. It will be worth the wait and thanks for the review!
G

Just wanted to confirm... this transfer was indeed scanned from the three original Technicolor negatives in that remarkable recombining process, a la the recent breathtaking Warner Archives releases (PRIVATE LIVES OF ELIZABETH AND ESSEX, ANNIE GET YOUR GUN, ROMANCE ON THE HIGH SEAS, FLYING LEATHERNECKS, etc.)? Love to have Robert Harris weigh in on that...

I did not mention this in my review, but the trailer for The Naked Spur, which is included in the bonus features, suffers from the same registration errors and muddy colors that used to be representative of the film’s appearance on home video. If you compare the video quality of the trailer to the feature presentation, it gives you a fresh appreciation of how great this film looks on the new disc.

Have not yet got my hands on this but really looking forward to it. Love this film and I am thrilled about the comments on the presentation on this blu.
T

Gerani53 said:
Just wanted to confirm... this transfer was indeed scanned from the three original Technicolor negatives in that remarkable recombining process, a la the recent breathtaking Warner Archives releases (PRIVATE LIVES OF ELIZABETH AND ESSEX, ANNIE GET YOUR GUN, ROMANCE ON THE HIGH SEAS, FLYING LEATHERNECKS, etc.)? Love to have Robert Harris weigh in on that...
Click to expand... I watched The Naked Spur Blu-ray last night and it is gorgeous.

Thank you for the great review. This one is on my future purchase list.
G

both those titles would be magnificent. for now I am glad my Mann-Stewart collection will be complete. (After pay day of course)
You must log in or register to reply here.