Forum List What's new Dark Style Change width
Log in Register
What's new Search
Menu
Log in
Register
Navigation
Install the app
More options
Dark Style
Close Menu
Posted on May 18, 2020 by Timothy Bodzioney
You are using an out of date browser. It may not display this or other websites correctly.
You should upgrade or use an alternative browser.
Highly recommended offbeat British science fiction/horror film 4.5 Stars

The Mind Benders opens with elderly Professor Sharpey (Harold Goldblatt) of Oxford sitting at a table at The Royal Institution in London.  Sharpey looks and acts disoriented; on the table in front of him is a briefcase with a stack of 5-pound notes piled haphazardly upon it.  Sharpey stuffs the notes into the briefcase and exits for Paddington station to catch a train back to Oxford.  He is being followed.

As the train leaving for Oxford nears departure Sharpey is greeted by his young colleague Tate (Michael Bryant) who ushers the dazed man onto the train.  The respectable-looking man tailing Sharpey climbs into another compartment.

Suddenly as the train moves at full speed, Sharpey stands up, opens the door, and throws himself off of the train.  Tate pulls the emergency cable and the train screeches to a halt.  Tate and a porter rush to the dead Sharpey.  The man following Sharpey shows Tate that Sharpey’s briefcase is filled with bundled pound notes.

The next day in Oxford the man who had been tailing Sharpey walks from his hotel to the University.  Everything looks and feels normal as he strolls through the streets.  Once he gets to campus he is greeted by a student and we learn that his name is Major Hall and that he is a military inspector and one-time scientist.

Major Hall is investigating Sharpey’s ties with communist agents.  Hall believes that Sharpey sold secrets to communist agents.  This is dismissed by Calder (Geoffrey Keen), Sharpey’s Dean.  Sharpey, Calder maintains was a pacifist and politically naïve.  Hall asks how does one explain the 1,000 pounds in Sharpey’s briefcase?

Hoping to find a lead, Hall asks to be briefed on Sharpey’s research.  Calder doesn’t believe it will lead to anything but instructs Tate to do so.  Tate shows Hall a film on Sharpey’s work with isolation/deprivation.  It turns out that the only person believed to have subjected himself to this was Sharpey’s co-researcher and fellow professor, Henry Longman (Dirk Bogarde).  Hall asks Tate to arrange an interview.

When Tate goes to visit the Longmans, we see the couple and their three children (a fourth on the way) living what one could be viewed in the staid Oxford community as a bohemian lifestyle.  It is a life of chaos and disorder – but one that seems to be fully embraced by Longman and his adoring wife, Oonagh (Mary Ure).

We learn that not only has the affected Longman not been to work since his deprivation session, but we also learn that he was not the only subject; Sharpey too went into the tank.  Longman assures Hall that Sharpey’s experiment with deprivation had something to do with this mystery.  Hall is unconvinced believing Sharpey a common traitor.

Longman says that isolation has profound effects on the psyche and to prove it consents to go through it again to prove his colleague innocent.  Hall explains to Tate that in order to test Longman’s theory that once Longman reemerges from the tank that they would have to break a firmly held belief of Tate’s.

Longman’s reputation as a free thinker makes this difficult.  Somebody mentions that the only thing Longman believes in his marriage.  It is quickly and callously decided that Longman’s marriage is to be put to the test.

The Mind Benders was made by the team of Michael Relph and Basil Dearden.  Before teaming as a producer with Dearden, Relph was an art director at Ealing.  Dearden also started his directing career at Ealing.

Working with Dearden they were responsible for several excellent movies including The Captive Heart, Pool of London, Sapphire, The League of Gentlemen, and Victim.  Most of these films display a liberal humanistic point of view but transcend being ‘issue’ films.  There are several more good movies on their resume.  The pair had a very good 20-year run together.

Auteurists were particularly hostile to British filmmakers.  The Relph/Dearden decline coincides with the decline of the British film industry.  David Lean seems to be the only ‘major’ British director to survive, though he too, was never a darling of the auteurists.  It makes one wonder what Michael Powell’s reputation would be without champion Martin Scorsese, or Hitchcock’s had he never left England?

The excellent script is by novelist/screenwriter James Kennaway who wrote the novel and screenplay of Tunes of Glory.  He also wrote Violent Playground and Battle of Britain.  He died of a heart attack at the age of 40.

The Mind Benders is a hard movie to categorize.  The Mind Benders is a movie of ideas.  In spite of its science fiction/horror elements, it does not condescend to genre conventions.  There are no cheap thrills.  It is not a movie aimed at children like most horror/science fiction films of the era.  While the movie does deal with adult problems it doesn’t do so in an exploitive manner.  In fact, the most horrible act happens offscreen and is only described.

The Mind Benders is a very unconventional movie in that there isn’t a villain.  If there is a villain, it’s the workings of the unconscious mind – Longman and Tate’s.

The science-fiction elements of the film deal with isolation.  I don’t know how accurate this is, but I didn’t question it while watching.  The horror elements deal with the Jekyll and Hyde transformation of Longman.  As I wrote above, neither of these elements are played in typical movie fashion.  Jekyll and Hyde themes usually involve releasing the id.  In The Mind Benders, it involves releasing the unconscious.

One of the scariest aspects of The Mind Benders is what it unleashes in Longman (and Tate).  Tate is humiliated by what it reveals in him – the result is never having a chance with the women he secretly loves; Longman is much more ambiguous.  You’re not certain if Longman secretly desires to be the character he is transformed into – his name is Longman.  Is the transformed Longman the man he longs to be?  The very nature of mid-century British gender roles comes into question.

Longman’s marriage and family stand in stark contrast to what is portrayed as otherwise normal.  Every male in the film other than Longman appears to be traditional, ‘stiff upper lip’ Brit.  The viewer first meets Longman’s family on Tate’s first visit.  The gate is open and welcoming.  The children are happy and at play.  They are bright, open, and all over the place.  Literally coming and going through windows.  Longman and Oonagh appear to be circus keepers as opposed to parents.  The roles of father and mother appear to be blurred.  Longman is not afraid to be vulnerable.   Contrast this when Tate visits after Longman’s transformation; the gate is closed, the children subdued, the house unwelcoming.

If Longman is contrasted with all the other adult males in the film, there is only one other female in the film, Annabella (Wendy Craig) and she too is unconventional.  If Oonagh is a non-traditional mother, Annabella totally rejects the traditional female role.

At first, Annabella is initially portrayed as a loose woman living on a boathouse near the University.  The type of woman the Oxford boys ogle and brag about behind her back.  But Annabella, burned by poisonous love affairs, has given up of living a normal life and plays by her own rules.  She is self-sufficient and it appears that much of the bragging is fiction.   She and Oonagh are the only characters that display any sensitivity or self-awareness.

Kino’s transfer is about 95 percent wonderful.  The Mind Benders was shot by the underrated Denys Coop.  Coop was at the center of the post-war British film industry and worked on way too many great films to even start to list here.  Coop shot many of the kitchen sink/angry young man films (A Kind of Loving, This Sporting Life, Billy Liar – he was the camera operator on Look Back in Anger) of the late 50s and early 60s.  It’s a style that looks natural but isn’t – it takes a lot of work to achieve that kind of ‘artlessness’.  The only flaw with the transfer (and I’m guessing this is due to the master Studio Canal provided) is the mistimed day-for-night sequences.

Audio is fine, highlighting the great Georges Auric’s (Beauty and the Beast, Dead of Night, The Wages of Fear, Roman Holiday) score.  I don’t know if it was the actor’s accents, the audio track, or my aging ears, but I did have to use subtitles for a couple of crucial exchanges on two instances.  But these are fleeting.

A commentary by film historians Howard S. Berger and Nathaniel Thompson.  I did not care for this commentary.  Not much research other than what is easily accessible online, and I disagreed with much of their interpretations.  They talk about how the film would not have been possible without the previous year’s The Manchurian Candidate as they both deal with mind control.  The movies, outside of the mind control plot element have nothing in common, thematically, or stylistically.  The Manchurian Candidate is a political thriller/satire.  The Mind Benders is a character study.  The two think that Hall is the villain of the piece; while I agree that while what Hall does is horrendous, it is the only path he is given to uncover the truth.  The film ends with Hall and Longman together – the idea being that both kinds of men need the other to advance science.  What started as antagonism ends with mutual respect.  They also devote a great deal of time to Bogarde’s homosexuality serving as some sort of subtext to his performance.  They use the Dearden/Bogarde collaboration, Victim as some sort of ‘breakthough.’  The problem with this is that Victim deals directly about closeted homosexuals, The Mind Benders doesn’t.  This is little better than gossip so, I’m not buying.  Bogarde is a very good actor giving a very good performance in this film.

There is a theatrical trailer which interestingly illustrates how clueless the studio was in its marketing.  There are also trailers for other Kino releases involving talent from The Mind Benders.

I think The Mind Benders is one of the great, little known films of the 1960s.  I find it to be very powerful and moving filled with mystery and ambiguity.  Basil Dearden is one of my favorite neglected directors.  In The Mind Benders everything clicks; the script, the direction, the art direction, the photography, the performances.  It’s a multi-layered film that reveals more upon each viewing.  I’m always intrigued by the film and whenever I come across it, I’m always sucked in.  I highly recommend it.

Thank you for the very well-informed review, Tim. I purchased this last year during one of Kino's sales and really enjoyed the film.
You must log in or register to reply here.

A PEEK AT THE MIND BENDERS 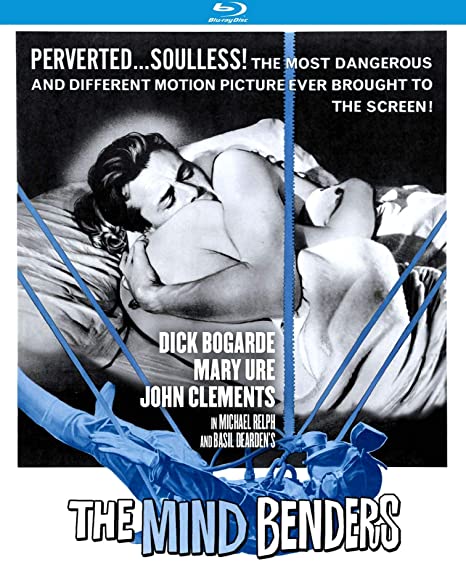