During the Golden Age of Hollywood, Burt Lancaster could be counted upon to lead both trenchant dramas as well as exciting adventure films with great skill and style. However, he also made two forays behind the camera as a director as well; the first was the frontier Western The Kentuckian (1955). The second – done 19 years later and with longtime friend and associate Roland Kibbee assisting him – was The Midnight Man, an offbeat whodunit in a small college town. Long unavailable on home video, the movie makes it debut on Blu-ray courtesy of Kino Lorber through their Studio Classics line.

Recently paroled, former police officer Jim Slade (Burt Lancaster) is given a job as a night watchman at Jordon College in a small Southern town. However, any chances of resuming a normal life is quickly shattered when a coed – the daughter of a prominent state senator – is found murdered following the seemingly unrelated theft of tapes from the Psychiatry department. While the local sheriff (Harris Yulin) seems quick to pin the crime on the perverted janitor of the college (Charles Tyner), Slade goes off on his own investigation into the murder, much to the chagrin of his parole officer (Susan Clark). His sleuthing will unveil a hornet’s nest of corruption and double-crosses, with a revelation that unveils a shocking betrayal of trust of close friends and the community at large.

Coming in at the genesis of the neo-noir subgenre, The Midnight Man is both a solid mystery as well as an engrossing character study. If it feels like a feature length version of one of Universal’s popular TV mystery series of the time (like Columbo or The Rockford Files), it shouldn’t be too surprising, since Roland Kibbee (the film’s co-director, co-producer, and co-writer with Burt Lancaster) had contributed scripts to Columbo around the same time the movie was in production. Anyway, the film’s mystery is a bit complex, which means that it takes multiple viewings to fully decipher some of the clues buried into the story (and there are quite a few). One of the film’s greatest strengths though is the genuine atmosphere and feel of a small college town – the movie was filmed on location in Clemson, South Carolina and nearby Clemson University, so not a total surprise once again. So, while the mystery might be a bit confusing the first time you see it, please take the time to watch it multiple times to understand it and uncover the clues; it’s definitely a movie that’s rewarding in this way.

While it’s not one role that immediately comes to mind when one talks about Burt Lancaster’s career, he manages to do a solid job in the lead; he’s certainly no slouch in the director’s chair either. Susan Clark acquits herself well as the parole officer who becomes romantically entangled with Slade; this would be her second film alongside Lancaster, following Valdez is Coming (1971). Veteran character actor Cameron Mitchell makes a solid impression as the friend of Slade’s who may be harboring a secret about the murder mystery; Harris Yulin is remarkable as the Sheriff who may have jumped the gun in identifying the murderer. Other memorable appearances include a pre-Dukes of Hazzard Catherine Bach as the ill-fated coed, Joan Lorring as the wife of Slade’s friend, Ed Lauter as a backwoods crook, Morgan Woodward as the coed’s senator father, Charles Tyner as the perverted janitor, Bill Lancaster (Burt’s son) as the boyfriend of the slain coed, Nick Cravat – a longtime friend and former acrobatic partner of Burt’s from their days before Hollywood – as the college gardener, and Robert Quarry – Count Yorga himself – as the psychiatric professor whose stolen session tapes form the genesis of this mystery.

The original 1:85:1 aspect ratio is intact on this HD transfer of the movie. Film grain is strong and organic with some fluctuations apparent in the night scenes. Colors are also strong with fine details rendered faithfully as well; all in all, another solid transfer done by Kino.

The film’s original mono soundtrack is presented on a DTS-HD Master Audio track for this release. Dialogue is strong, including the sound effects, with good fidelity and ambiance given to Dave Grusin’s smooth and jazzy score. There’s minimal instances of age-related artifacts here – distortion, crackling, hissing, etc. – making this track another great job by Kino for a movie making its home video debut.

Commentary by film historians Howard S. Berger & Nathaniel Thompson – Recorded for this release, the duo talk about the movie as well as some stories involving the cast and crew; overall, an engaging and insightful track.

Although it went largely unnoticed and unappreciated at the time, The Midnight Man is actually a very solid little mystery movie. Kino has done a great job in resurrecting this obscure offering for its home video debut with solid marks in both audio and visual quality as well as providing an insightful commentary track to accompany the film. Fans of the film – and Burt Lancaster – can rejoice over the solid Blu-ray release, which hopefully finds a new audience. 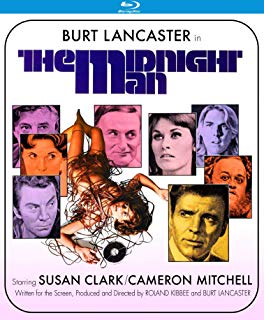