Forum List What's new Dark Style Change width
Log in Register
What's new Search
Menu
Log in
Register
Navigation
Install the app
More options
Dark Style
Close Menu
Posted on February 17, 2016 by Matt Hough
You are using an out of date browser. It may not display this or other websites correctly.
You should upgrade or use an alternative browser.
not bad made-for-home video thriller 2.5 Stars

A made-for-home video crime thriller, D.C. Hamilton’s The Midnight Man offers an engaging protagonist, a couple of notable surprises, and discretion with its violence that one might not expect for an unrated effort.

A made-for-home video crime thriller, D.C. Hamilton’s The Midnight Man offers an engaging protagonist, a couple of notable surprises, and discretion with its violence that one might not expect for an unrated effort. The scenario has borrowed bits and snatches from lots of other thrillers, everything from the 007 thriller The World Is Not Enough to Tom Cruise’s Collateral, but its wry sense of humor and a host of familiar faces in tiny roles make the film one of some interest.

Without the ability to feel pain, mob enforcer Grady (Will Kemp) is often sent to do reckless, nasty jobs that others might shy away from because nails through his hands and dislocated shoulders mean nothing to him. After eliminating his boss’ (Brent Spiner) enemy Pearl (Vinnie Jones) after an extended night of torture got him nowhere, Grady is next assigned the elimination of four of his boss Ezekiel’s henchmen who he has learned have betrayed him to the FBI. The first name on the list Marky (Nick P. Ross) doesn’t pose a problem, but Grady is ambushed at Marky’s home and dosed with heroin so that when EMT Alexandra (Brinna Kelly) arrives on the scene and brings him out of his narcotic coma, Grady is astonished to discover that his until-now imperviousness to pain has evaporated and he now feels everything. Knowing he has three more increasingly dangerous hits to carry out during the evening, he kidnaps Alexandra to be on hand in case he sustains injuries at the other hits which will be far more difficult now that he has the same pain threshold as an average man, only intensified since he’s never felt pain before. The three remaining subjects: a lethal playboy (William Miller), an ex-boxer (William Forsythe), and an accomplished torturer (Doug Jones) are not going to be pushovers.

Director D.C. Hamilton and star Brinna Kelly have collaborated on the screenplay, and amid its familiar appropriations from other films to find characters and the basic set-up for the narrative, there are some delicious surprises along the way as well as some narrow escapes made by Grady that tighten the anxiety noose pretty snugly. Amid the gratuitous scantily-clad ladies in bikinis montage and a sex scene between Grady and Alexandra that comes out of nowhere, there are better moments to savor: the introductory torture sequence where the quip-filled Grady browbeats his tormentors before getting the drop on them offers a bracing introduction to the picture, and later scenes in the gym and strapped in at Vick’s and at his mercy as he gleefully describes what horrors he’s about to inflict make potentially gruesome scenes more bearable by the sprightly playing of the actors in question. True, there is often too much talk (the bad guys always get too chatty about their schemes and get too close to their victim thinking they have the upper hand: one time it might work but not three or four times), and the basic scenario never stops to consider that while Grady can’t feel pain, he can bleed to death from his wounds though that never seems to be a consideration.

Will Kemp is unquestionably the MVP of the film, irresistibly cocksure when impervious to pain and carefully shady when he’s trying to hide his affliction when he isn’t. He handles both the wry lines and the physical action nicely. Brinna Kelly’s performance is more erratic: more realistic and believable in the early going and more brittle and overly mannered in the film’s later stretches. Brent Spiner only gets a scene or two to establish Ezekiel’s nasty credentials, and the wonderful Vinnie Jones gets even less time as the quickly dispatched Pearl. Among the bad guys we meet during the film, Doug Jones stands out as the eccentrically weird torture master Vick while William Forsythe, Max Adler, Steve Valentine, William Miller, and Dominic Pace each do well with brief but effective moments in the spotlight. Jenna Vaughn is adorable as Alexandra’s beloved niece Hayley.

The film is framed at 2.35:1 and is anamorphically enhanced for widescreen televisions. Using a good upconverting player, one might be hard-pressed not to think this was a high definition image when viewed at a comfortable distance. Sharpness is excellent throughout, and color values are solid and true with realistic and appealing skin tones. Contrast has been dialed in expertly with great consistency while black levels are quite inky and impressive. The movie has been divided into 8 chapters.

The Dolby Digital 5.1 sound mix is a solid if slightly underwhelming mix (likely due to budget considerations). Dialogue has been well recorded and has been placed in the center channel. Atmospheric effects don’t get quite the sophisticated feed through the fronts and rears that more expensive productions receive. Torin Borrowdale’s background score gets the most surround attention with placement throughout the entire soundfield.

There are no bonus features contained on this DVD.

The Midnight Man (though the title is a bit of a misnomer: he refers to himself as “The Midnight Monster” during the movie) offers a more than decent amount of surprises and thrills as a low-budget mob picture. While there is no Blu-ray release for the movie, this DVD offers startlingly excellent picture quality which action fans might want to consider renting. 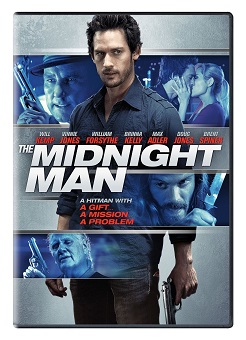