Forum List What's new Dark Style Change width
Log in Register
What's new Search
Menu
Log in
Register
Navigation
Install the app
More options
Dark Style
Close Menu
Posted on November 6, 2018 by Todd Erwin
You are using an out of date browser. It may not display this or other websites correctly.
You should upgrade or use an alternative browser.
Eye and Ear Candy Galore 4.5 Stars

The Matrix Trilogy arrives on 4K UHD Blu-ray in stunning new transfers. Highly Recommended, even for those without 4K UHD.

Much has been written and discussed about the three Matrix films by The Wachowskis, and they have been released numerous times on virtually every home video format available. When The Matrix first hit movie screens in 1999, it was an instant success, despite very minimal marketing by its studio, Warner Bros. Audiences had never experienced anything quite like it before, going back again and again, to both relive the visuals but also to try and figure out what the heck the film was about. With that kind of success, the studio, Warner Bros., was anxious for a sequel, and the Wachowski’s delivered what was essentially a two-part sequel with The Matrix Reloaded released in May of 2003 and The Matrix Revolutions six months later, even though the first film was developed with no intentions of a sequel. Reloaded had the largest box office haul of the three films, while Revolutions completed its theatrical run with the lowest box office of the three, possibly from fans’ outrage to the rather abrupt cliffhanger ending of the second film, but most likely due to the somewhat disappointing conclusion to the trilogy and religious undertones of the two sequels that never quite paid off.

Wow. The films have never looked better than they have here on the 4K UHD Blu-ray releases (available as a Trilogy boxed set and individually). Warner has created new 4K scans of the completed films (the exception being the freeway chase sequence from Reloaded, in which that sequence alone was completed as a 2K digital intermediate), and they are presented on these 4K UHD Blu-ray discs in HEVC-encoded 2160p transfers with both Dolby Vision and HDR-10 high dynamic range, retaining the original 2.40:1 theatrical aspect ratio, all under the supervision of Director of Photography Bill Pope. Viewing these films on HDR-10 capable equipment, many of the complaints of the overuse of green tinting in the data realm on previous video releases are addressed more carefully, with the green hue more subdued and colors appearing more natural. Detail and overall sharpness is off the charts, with creases in the black leather outfits more noticeable than ever, including the pock marks in Laurence Fishburne’s face. Contrast is also exceptional, with deep inky black levels and strong shadow detail. Film grain is evident and natural, never obtrusive. These are how catalog titles should look in 4K. For those who have not upgraded their system to 4K UHD, the included Blu-ray editions are from the same 4K masters, and as of this writing are not available as separate Blu-ray only releases.

Wow again. All three films have been remixed in Dolby Atmos (except Warner has apparently gone back to their old ways, as Atmos is not the default track on either the 4K UHD or the standard Blu-ray discs, and instead defaults to a lossy 640kbps Dolby Digital 5.1 track – Why, Warner, why?). The Matrix Trilogy has always been considered great demo material for any home theater enthusiast who wanted to show off their sound system, going as far back as the 2007 DVD releases. The new Atmos mixes open up the soundstage 360 degrees (even in a 5.1.2 configuration) by placing sounds more precisely than was possible before, yet there are no “new” discrete sounds added. LFE is much tighter, too, as is the case with most Atmos mixes. Dialogue is clear and understandable throughout without getting lost in the overall mix.

The following special features can be found on the feature film discs:

Written Introduction by The Wachowskis: A text essay by the films’ writer/directors explaining why they did not provide their own commentary track and instead suggested the tracks included here.

Digital Copy: An insert contains a code to redeem a digital copy of The Matrix Trilogy on Movies Anywhere. Unfortunately, I redeemed my code on Vudu, which only provided HDX copies on all Movies Anywhere retail partners. Warner is aware of this (as, according to the studio, the code should have redeemed as UHD across all retailers) and, as of this writing, is looking into the issue.

The Matrix Trilogy arrives on 4K UHD Blu-ray looking and sounding better than ever, with most of the special features ported over. This set is highly recommended for both UHD adopters and those who have not upgraded to UHD, as the included Blu-ray editions of the movies are struck from the same master as the UHD version, and are not currently available as separate Blu-ray releases.

Obviously this set doesn't include the Animatrix so don't throw out your old Ultimate blu's just yet. I just finished Reloaded (and watched the original film when it first came out on 4K) and I so far fully agree with the top notch A/V scores. For something filmed in Super 35 with effects finished in 2K, this does show how a 4K transfer can be done right and shine. I think I can safely assume Revolutions will be just as fantastic in terms of A/V quality.

One thing I discovered while rewatching Revolutions for the first time in probably 7+ years...it's actually aged well for me, in terms of the story. I was one of those who initially felt that they maybe should have stopped after the original. But I found myself engrossed in the story this time around, in a way that the first few viewings (and I watched this and Revolutions a lot back in the day). I'm really looking forward to seeing how I react to Revolutions when I get around to viewing it on 4K.

I am very curious to hear from anyone who purchased the Trilogy boxed set and redeemed the digital code as to what resolutions they received.

Lord Dalek said:
Obviously this set doesn't include the Animatrix so don't throw out your old Ultimate blu's just yet.
Click to expand...

Zion Archives and The Burleyman Chronicles.
You must log in or register to reply here. 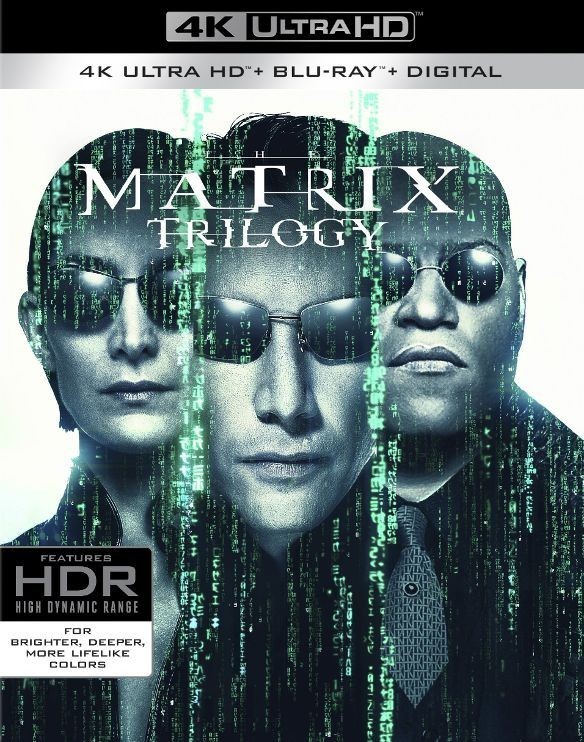