Forum List What's new Dark Style Change width
Log in Register
What's new Search
Menu
Log in
Register
Navigation
Install the app
More options
Dark Style
Close Menu
Posted on September 16, 2019 by Matt Hough
You are using an out of date browser. It may not display this or other websites correctly.
You should upgrade or use an alternative browser.
Fondly remembered satirical comedy is one of Ealing's best. 4 Stars

Alexander Mackendrick’s The Man in the White Suit combines comic circumstances with a sobering reflection on economic necessity that gives this fondly remembered classic additional relevance even today.

Ealing Studio came up with a gently satirical socioeconomic comedy in Alexander Mackendrick’s The Man in the White Suit that remains one of the British movie factory’s most fondly remembered and endearing works. Featuring Alec Guinness in another of his meekly eccentric roles as a scientist who inevitably becomes the pariah of both labor and capitalists, The Man in the White Suit combines wit, farce, and thoughtful reflection on the positives and negatives of scientific achievement.

Impoverished chemist Sidney Stratton (Alec Guinness) is at a crossroads in his career. He’s been trying to invent a long-lasting clothing fiber, but his unreasonable demands for high-end equipment have gotten him fired from job after job. Finally, Sidney creates a fabric that when made into a white suit is impervious to the elements – it cannot stain or wear out. At first, his discovery is celebrated as a potential boon to his boss Mr. Brimley’s (Cecil Parker) textile plant, but, soon enough, the other clothing manufacturers and the labor unions realize that the perfect suit that will never get dirty or wear out is actually very bad for business.

Based on his play, the script by Roger MacDougall (assisted by John Dighton and director Alexander Mackendrick) takes a fair amount of screen time to get going, clearly twenty-five minutes until Stratton finally creates his magic formula for the first time (and once it’s thrown away, there is even more time spent trying to recapture lightning in a bottle which leads to a hilarious series of explosions with the string of failed experiments, at one point workers donning helmets and using sandbags for protection as if they were living through a second blitz). Once the narrative revs up, however, it’s off and running as various factions come to Brimley’s plant to register their horror at what is about to befall the industry. Director Alexander Mackendrick makes certain to cover all strata of the work force with each given his or her say in the matter all the while Stratton stubbornly refuses to sell away his prized find even turning down £250,000. There’s a madcap chase at the end in the manner of many of Ealing’s best comedies, but it’s tinged with sadness, too, as Stratton begins to brush away some of his intellectual pretensions and see his invention from a more humanistic angle.

Alec Guinness takes a slightly more single-minded approach to his role as dedicated scientist Sidney Stratton only breaking from his academic rigor in the movie’s final moments, but it’s still a beguiling portrayal. Joan Greenwood has some very funny moments as the daughter of Stratton’s employer who’s all for his staying true to his principles even if they’re in conflict with her father. It’s great to see grand old trouper Ernest Thesiger playing the horrified textile manufacturer representative Sir John Kierlaw try to reason Stratton out of his invention while Cecil Parker gets to play both sides of the coin as the executive who wants quick profits for his company but eventually sees it could also lead to the downfall of the industry. Vida Hope is a hoot as a factory worker and strong union organizer who has a soft spot for Sidney but also sees her livelihood coming to an end if he’s allowed to proceed with his invention. Michael Gough and Howard Marion Crawford do well as other scientists chagrinned by Stratton’s cleverness.

The film’s original theatrical aspect ratio of 1.37:1 is faithfully rendered in this 1080p transfer using the AVC codec. Sharpness is exceptionally good throughout, and the grayscale is impressive, too, especially in the black levels combined with the expert utilization of contrast. There are some scratches here and there (including an obvious one at film’s end) and some flicker on occasion, but the overall look to the transfer is outstanding. There is no chapter index on the main menu, but the movie has been divided into 8 chapters.

The DTS-HD Master Audio 2.0 mono sound mix is very era-typical with very little fidelity on either end of the aural spectrum. The wonderfully whimsical blurps and bloops of the lab that signify Sidney’s experiments in full operation are a recurring sound effect combined with Benjamin Frankel’s background score and other sound effects that, when combined smoothly with the dialogue, make a fine soundtrack offering. All age-related problems with hiss and other anomalies have been eliminated.

Audio Commentary: film historian Dr. Dean Brandon offers a rather mundane and spotty commentary track. He often goes off in rambling discussions of filmmaking taking him far afield from The Man in the White Suit, and his halting delivery, combined with continual throat clearing, doesn’t make for the most entertaining listen.

Alexander Mackendrick’s The Man in the White Suit combines comic circumstances with a sobering reflection on economic necessity that gives this fondly remembered classic additional relevance even today. The Kino Lorber presentation of Studio Canal’s very fine high definition transfer is definitely recommended for fans of the genre.

I purchased Kind Hearts and Coronets and The Lavender Hill Mob during the last Kino sale and will be purchasing The Man in the White Suit during the next one in November. Thank you for the comprehensive review, Matt. I am really loving the Ealing comedies!

Another favorite from Ealing and I hope Kino will release The Titfield Thunderbolt soon.

atcolomb said:
Another favorite from Ealing and I hope Kino will release The Titfield Thunderbolt soon.
Click to expand...

Hopefully with a quality recombine

Darby67 said:
I purchased Kind Hearts and Coronets and The Lavender Hill Mob during the last Kino sale and will be purchasing The Man in the White Suit during the next one in November. Thank you for the comprehensive review, Matt. I am really loving the Ealing comedies!
Click to expand...

Yes, they really are something special. I feel so privileged to be able to review them.

I have the five movie Alec Guinness Collection on DVD. I love them all.
You must log in or register to reply here. 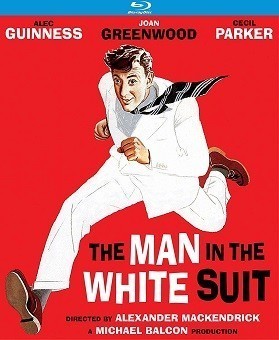