Forum List What's new Dark Style Change width
Log in Register
What's new Search
Menu
Log in
Register
Navigation
Install the app
More options
Dark Style
Close Menu
Posted on November 30, 2020 by Todd Erwin
You are using an out of date browser. It may not display this or other websites correctly.
You should upgrade or use an alternative browser.
Worthy upgrade, but no extras 4.5 Stars

Warner Bros. Home Entertainment has released The Lord of the Rings Trilogy in a 9-disc set on 4K UHD Blu-ray just in time for holiday gift-giving for the home theater enthusiast.

Director Peter Jackson’s undertaking of adapting J.R.R. Tolkien’s fantasy epic The Lord of the Rings for the big screen was most certainly a history-making event. Originally developed at Miramax, the studio deemed the project too expensive, and the trilogy found a home at New Line Cinema. The three films would be shot as one long production, with principal photography starting in October of 1999 and lasting just over a year, completing in December 2000, with reshoots lasting through 2004 (for the extended cut of The Return of the King).

The first film in the trilogy, The Fellowship of the Ring, was released theatrically on December 19, 2001, with Jackson’s extended cut released as a 4-disc special edition DVD set on November 12, 2002 with 30 minutes of additional or alternate footage. The second film, The Two Towers, was released theatrically on December 18, 2002 with an extended cut on 4-disc DVD released on November 18, 2003 with an additional 46 minutes. The third and final film, The Return of the King, was released theatrically on December 17, 2003, going on to win 11 Academy Awards for that year including Best Picture and Best Director, with an extended cut arriving on 4-disc DVD one year later on December 14, 2004 with a whopping 52 additional minutes. That additional running time does not include the fan club appreciation credits. While I enjoyed the theatrical cuts, for the most part I prefer the extended cuts of these films. Both Fellowship and Two Towers have more character development moments, with the additional footage appearing seamlessly within the narrative. The same cannot be said of the extended cut of The Return of the King, however. While that cut does include some rather important new scenes (such as the fates of Saruman and Grima Wormtongue), it also includes scenes that feel a bit repetitive (Aragorn’s battles with the Army of the Dead). There have been many attempts, both before and after Peter Jackson’s The Lord of the Rings movies, to shoot multiple films almost nonstop (the first two Superman movies with Christopher Reeve, the Musketeers movies by Richard Lester, the latter two Back to the Future movies, the latter two Matrix films, even Jackson’s adaptation of The Hobbit), but none have been quite as successful commercially and critically.

All three LOTR films were shot on 35mm in the Super 35 format with an aspect ratio of 2.39:1. For this release, shots that did not contain any visual effects were scanned at 4K resolution, often from the original camera negative, while visual effects shots were upscaled from 2K to 4K, all under the watchful eye of Peter Jackson, to create a new 4K digital intermediate with Dolby Vision high dynamic range. The 2160p HEVC-encoded transfer of each film includes both HDR10 and Dolby Vision HDR. The result is extremely breathtaking on both versions of all three films, and it is like watching these for the first time. There is a huge improvement in detail, even in the upscaled effects shots, highlighting much of the intricate textures and inscriptions Richard Taylor’s team made on the armor and various swords created for the film. Since these new “transfers” were completed at the same time, the color scheme is now similar across all three films. Contrast is also improved, providing deeper blacks and stronger shadow detail. Unfortunately, Warner has decided for this release to only include these films on 4K UHD Blu-ray – there are no Blu-ray editions included in this set.

The Lord of the Rings films were released theatrically in 5.1 mixes with 6.1 mixes created for the extended cuts. Both versions of all three films have now been remixed in Dolby Atmos, providing even more depth and width to the listening area. All three films have never sounded better! Sauron’s “voice” is much more powerful, coming out of all speakers around and above the listener, almost as if it was coming from inside your head. Gandalf’s dragon firework that is ignited in the shire during the first act of Fellowship of the Rings really does sound like it is flying overhead in this new Dolby Atmos mix. LFE is much stronger than on previous releases, providing more impact to Orc attacks and smashing rocks. Howard Shore’s score is also much more immersive, completely surrounding the viewer. Dialogue is clear and understandable throughout.

Warner has opted to not include any special features in this set, not even the extensive commentary tracks from the original 4-disc DVD Extended Edition sets. The studio has announced, though, that “a 4K UHD ‘Middle Earth’ Ultimate Collector’s Edition featuring the theatrical and extended cut of all six films, along with new bonus content, previously released Blu-ray discs of The Hobbit Trilogy, and remastered Blu-ray discs of The Lord of the Rings trilogy will be released in the summer of 2021.” The press release also mentioned that remastered Blu-ray discs of the 3 films will be released this time next year. However, it is rumored that the Ultimate collection will not include any previously released special features (other than what was included on The Hobbit Blu-ray discs).

The only “extra” included in this set is a Movies Anywhere code to redeem digital copies of both theatrical and extended cuts of all three films in UHD. Redeeming the included code gives you access to the following special features within the Movies Anywhere app:

The Two Towers: Extended Edition:
The Taming of Sméagol (SD; 39:36)

The Return of the King: Extended Edition:
Home of the Horse Lords (SD; 30:16)

It’s been a long time coming, but Warner’s UHD release of The Lord of the Rings Trilogy is outstanding from a presentation standpoint, with either edition of all three films being excellent demo material. Fans may want to wait six months, though, for the Ultimate Collector’s Edition to see what new special features will be included. Otherwise, hold on to your previous Blu-ray or DVD editions, as it appears that most if not all of the archival special features are not going to be included.

Thanks for the review, Todd. It's great to read that the transfers are all top notch and consistent across all three films. I'll wait for the inevitable price drop, but this will eventually find its way to my shelf. I love all three films, and don't need the extras.

I’m going to have to wait on these, only because I’m already tapped out due to Christmas (and my son’s birthday next week), but I’m super excited to eventually watching these AND The Hobbit trilogy on 4K! I have no problem keeping my previous releases for the special features.

I got mine 8:30am at Target ! They had them in the back stock room. I was the first one. Here is my set with my custom covers. Much better than those WB covers. It appears that nearly all of the special features from the physical media releases are available on the Apple TV app (only on Apple TV devices, though).

I just got this from Best Buy. Somebody had to grab it from a box in the back for me.

Unfortunately, Warner has decided for this release to only include these films on 4K UHD Blu-ray – there are no Blu-ray editions included in this set.
Click to expand...

I don't understand this comment. I see it too often, everywhere in reviews and posts online. Let's be honest with ourselves: why is it unfortunate that a 4K Blu-ray be released without a standard Blu-ray?

Consumers buy the 4K Blu-ray copy for the 10-bit, HDR, higher resolution scan of the OCN, and wider colour gamut on 4K-capable displays. This is, and always will be, the preferred version. There would be little point ever to watch the inferior HD BT.709 edition with its quality strapped by the rules of an old CRT-based TV system. I can say the same for every other 4K release.

Adding a HD Blu-ray to the package adds cost to the release, more manufacturing resources that puts stress on environment, weight to larger shipping boxes in distributing, and ultimately more waste for the landfill one day. The need for an HD Blu-ray seems to be more of "pack-rat" mentality rather than of necessity. These films were released almost 20 years ago in various DVD and Blu-ray editions and are still available as such. If there's a need for it, they're always in the disount bins!

Michael Osadciw said:
I don't understand this comment. I see it too often, everywhere in reviews and posts online. Let's be honest with ourselves: why is it unfortunate that a 4K Blu-ray be released without a standard Blu-ray?
Click to expand...

I like having a Blu-ray included because I haven't upgraded to 4K yet so I can pick up 9 out of 10 UHD releases and watch the Blu-ray while still future proofing my purchase. If I wanted these movies that badly (I don't), I could still see an upgraded Blu-ray and not have to upgrade my TV and player.

Michael Osadciw said:
I don't understand this comment. I see it too often, everywhere in reviews and posts online. Let's be honest with ourselves: why is it unfortunate that a 4K Blu-ray be released without a standard Blu-ray?
Click to expand...

Considering all the work that went into the remastering of these titles, many were hoping that the sets would include remastered Blu-rays, even though most of the time these re-issues do not. Also, some like myself, never upgraded LOTR beyond the 4-disc extended edition DVDs, so having a Blu-ray with bonus features in the same box would have reduced the amount of space taken up on my ever shrinking shelves by allowing me to discard the DVDs.

I just noticed that Movies Anywhere only offers the movies in 4K with Dolby Vision and HDR10, but only 5.1 audio (no Atmos).
J

I already have the green tinted Fellowship on BluRay with all the commentaries and documentaries, so I’m OK with just the UHD movie only versions with the colors corrected.
You must log in or register to reply here. 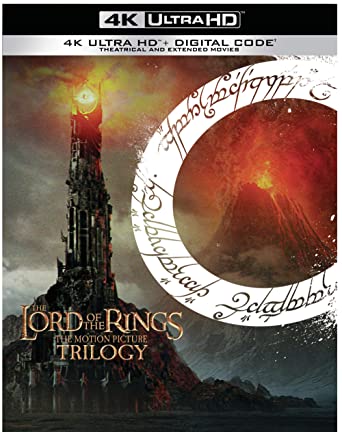