Forum List What's new Dark Style Change width
Log in Register
What's new Search
Menu
Log in
Register
Navigation
Install the app
More options
Dark Style
Close Menu
Posted on June 21, 2020 by t1g3r5fan
You are using an out of date browser. It may not display this or other websites correctly.
You should upgrade or use an alternative browser.
Classic Gary Cooper vehicle debuts on Blu 3 Stars

One of the most overlooked directors of American cinema, Henry Hathaway never really got the recognition that he deserved amongst his peers. Today, he’s best known for his work in the film noir and western genres, the latter often at times with John Wayne (seven times, including 1969’s True Grit) and Randolph Scott (seven times, including Hathaway’s first directorial effort, 1932’s Heritage of the Desert). He also worked with Gary Cooper seven times, including The Lives of a Bengal Lancer, a loose adaptation of the autobiographical novel by Francis Yeats-Brown. Universal originally released the movie on DVD as part of The Gary Cooper Collection, but Kino has licensed the movie for its Blu-ray debut.

Out on the northwestern frontier of India during Crown rule, Alan McGregor (Gary Cooper) is a highly respected – if somewhat defiant – lieutenant of the 41st Bengal Lancers. Tasked with welcoming two new members of the Lancers – including the son of the colonel (Richard Cromwell) – the trio soon find themselves involved with infiltrating the hideout of Mohammed Khan (Douglass Dumbrille), who is planning to seize a convoy of ammunition in order to stage an uprising against the British. Defying the orders of his superiors when the colonel’s son is captured, McGregor and fellow lieutenant John Forsythe (Franchot Tone) are left to rescue their comrade and stop Khan’s plan before it costs them their lives.

Though it’s overlooked today, The Lives of a Bengal Lancer is a solid example of escapist entertainment that Hollywood was so good at during the Great Depression. Originally set to include location footage of India (Ernest B. Schoedsack and cinematographer Rex Wimpy shot footage of a tiger hunt during their sojourn there), film stock problems meant that was scrapped and the movie was shot around the Los Angeles hillside area as a stand-in for India. That production issue aside, the movie does have some well staged action sequences (including the climatic mountain stronghold sequence, which likely earned the film’s lone Oscar win for Best Assistant Director) as well as some expressive flourishes in a few sequences (check out the camerawork by Charles Lang in the scene where McGregor and Forsythe are being tortured by Khan and his men). One should keep in mind that while the movie was intended to be pure escapism, it drew some criticism overseas for not only some inaccuracies involving the Bengal Lancers, but also for the depiction of the natives by the British (the movie was initially banned in China for that very reason); the latter would certainly be a bone of contention if the movie would’ve been made in today’s Hollywood. Other than that, The Lives of a Bengal Lancer is still a good adventure movie and it rivals George Stevens’ Gunga Din (1939) and Michael Curtiz’s The Charge of the Light Brigade (1936) for the best adventure is British India during the decade.

As the headstrong McGregor, Gary Cooper has one of his best roles of the 1930’s; the success of the movie would lead him to more adventure movies like The General Died at Dawn (1936), The Adventures of Marco Polo (1938), Beau Geste and The Real Glory (both 1939). As the more laid back Lt. Forsythe, Franchot Tone provides charm and comic relief to Cooper’s more stoic McGregor; he replaced Henry Wilcoxon during production and was nominated for a Best Actor Oscar for Mutiny on the Bounty, released the same year as this movie. Playing the youngest member of the Lancers, Richard Cromwell makes a notable impression as Lieutenant Stone; Guy Standing and C. Aubrey Smith are also memorable as the commanding officers of the 41st Bengal Lancers – the former the by-the-book colonel and the latter the experienced and friendly major. Other notable parts here include Douglass Dumbrille as Mohammed Khan (who utters the famous and often misquoted line “We have ways of making men talk”), Colin Tapley as Lt. Barrett (who clues in the Lancers to Khan’s location and movements), Lumsden Hare as the head of British Intelligence in India, J. Carrol Naish as the Grand Vizier, and Kathleen Burke – Lota the Panther Woman herself – as the seductive Russian spy who manages to lead our three heroes into peril.

The film is presented in its original 1:37:1 aspect ratio, taken from a recent 4K master. With the exception of fade ins and outs and some stock footage, film grain appears to be almost non existent and the overall image is rather soft; whether it’s due to the state of the elements used for the transfer or an issue during quality control, it’s not clear, but the gray scale is decent and fine details are visible but not as sharp. Scratches are present, but not too distracting and other problems like dirt and tears are fairly minor. Overall, this is a rather mixed bag in terms of quality and not much better or worse than the previous DVD; again, Kino can’t be faulted here, since this was likely the best they could’ve gotten with this title.

The film’s original mono soundtrack is presented on a DTS-HD Master Audio track. Dialogue is clear and strong along with the sound mix and sparse music, the latter getting the biggest boost here. Problems like distortion, crackling or hissing are fairly minor here, which means that this is likely the best the film will ever sound on home video and an improvement over the previous DVD and MOD DVD release.

Commentary by film historian Eddy Von Mueller – Recorded for this release, Von Mueller talks about the production as well as some historical context of the movie’s subject matter as well.

Theatrical Trailer (2:15) – Taken from a re-release of the movie.

Bonus KLSC Trailers – The General Died at Dawn, Beau Geste, Man of the West, Rawhide, 23 Paces to Baker Street & Legend of the Lost

Successful with both critics and audiences during its day, The Lives of a Bengal Lancer is a great example of escapism and Imperial adventure from the Golden Age of Hollywood. Kino’s Blu-ray release is a mixed bag, with a solid commentary track for a bonus feature and solid audio presentation, but a visual presentation that’s only slightly better than the previous DVD. Wait for a sale on this one, but it’s worth getting for the informative commentary.

A Few Words About A few words about...™ The Lives of a Bengal Lancer - in Blu-ray 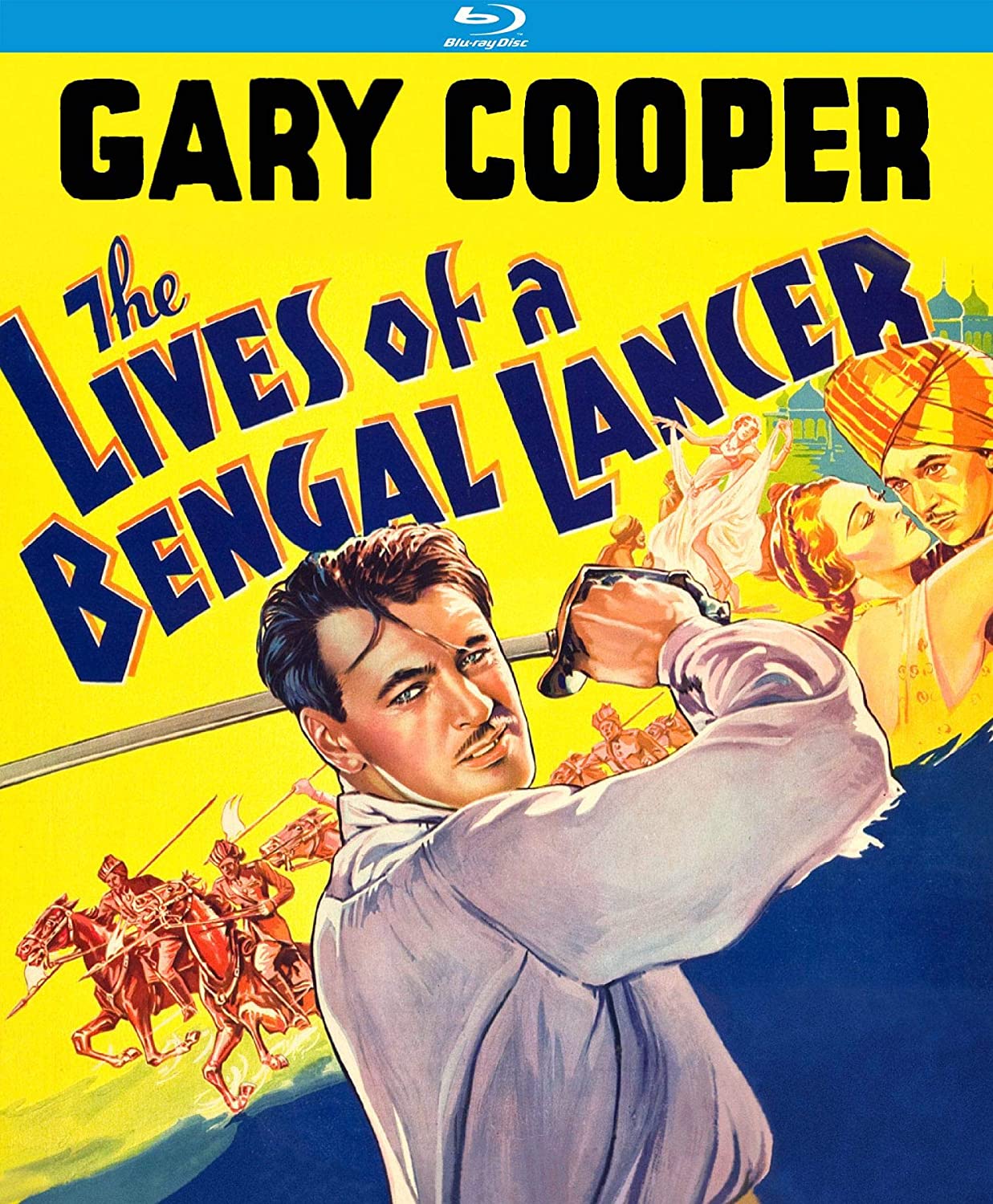