Forum List What's new Dark Style Change width
Log in Register
What's new Search
Menu
Log in
Register
Navigation
Install the app
More options
Dark Style
Close Menu
Posted on February 26, 2019 by Todd Erwin
You are using an out of date browser. It may not display this or other websites correctly.
You should upgrade or use an alternative browser.
Closer to its original theatrical presentation 4 Stars

Disney’s The Little Mermaid swims on to 4K UHD Blu-ray in a transfer that will likely polarize fans of the film and format.

Matt Hough reviewed Disney’s 3D Blu-ray release in September 2013, and I completely agree with his assessment of the film:

Sixteen-year old Ariel (Jodi Benson) is the young mermaid daughter of King Triton (Kenneth Mars), ruler of the seas, but she’s more than a little curious about the human world floating right above her. During a particularly violent storm at sea, she rescues Prince Eric (Christopher Daniel Barnes) and falls instantly in love with him. But in order to become his wife, she must shed her tail and acquire legs. To do that, she visits sea witch Ursula (Pat Carroll) who tricks her into signing a document granting her legs in exchange for her voice with the proviso that she has only three days to make the prince fall in love and kiss her. If she fails, she becomes a desiccated member of Ursula’s prison lair. Without her voice to identify to Eric that it was she who rescued him, Ariel is dependent on her friends Sebastian (Samuel E. Wright), Flounder (Jason Marin), and Scuttle (Buddy Hackett) to help her achieve her heart’s desire and prevent Ursula from taking over the sea.

Hans Christian Andersen’s fairy tale has been Disneyfied with the addition of Ariel’s singing sea buddies and the change of ending, but as with the best of Disney’s animated features, the protagonists go through daunting trials and tribulations against often frightening antagonists before the end arrives. Along the way is the absolutely first-rate musical score by composer Alan Menken and lyricist Howard Ashman which gives the film its greatest distinction. Though some of Disney’s previous fairy tales were full scale musicals, the score for The Little Mermaid is of Broadway quality with intricate rhythms and lyrics so fresh, witty, and spot-on that the cumulative effect of the brilliant animation (some of the best and most colorful Disney had turned out in decades), the involving story, and the superb music is an overwhelming one. “Under the Sea” is the first of many eye-popping production numbers to come in the Disney animated musicals, its reggae-rhythm infectious to the point of lifting one out of his seat and onto his feet to dance around the room. Both Ariel and Ursula have their songs of yearning: Ariel’s lovely “Part of Your World” and Ursula’s snaky “Poor Unfortunate Souls.” Ship’s cook Louis (Rene Auberjonois) sings his menu plans in “Les Poissons” which suspiciously seems more like a dry run for “Be Our Guest” in the next Disney musical, but “Kiss the Girl” sets up a lovely calypso-style ballad animated against a hilarious array of comic sight gags. This song is a perfect encapsulation of the new Disney mantra for these musicals: beautiful and heartfelt but never sacrificing a sense of fun for mere sentimentality. The voice casting is exquisite. Jodi Benson exudes the adolescent fervor of the youthful Ariel, and her handling of “Part of Your World” is boundlessly joyful and filled with the hopes and dreams of the young. Pat Carroll more than earns her place among the great Disney villainesses as the scheming, creepy (in more ways than one) Ursula. Samuel E. Wright as the crab Sebastian gets the film’s two most bracing numbers “Under the Sea” and “Kiss the Girl” and also offers a comic touch as Ariel’s (mostly ignored) voice of reason. Buddy Hackett as the scatterbrained seagull Scuttle wears a little thin by the end, but he’s a basically harmless distraction, and Jason Marin makes a sweet little companion for Ariel as Flounder. Kenneth Mars has great authority as King Triton while Paddi Edwards effectively voices the evil moray eels Flotsam and Jetsam who carry out their mistress Ursula’s bidding.

I first saw The Little Mermaid theatrically at the now demolished Pacific Northridge as part of Lucasfilm’s Theater Alignment Program (TAP), then a gain a few days later at the also now demolished Edwards/SoCal Laguna Hills Mall. Why am I mentioning this here in the Video portion of the review? Mainly because Disney’s new 4K UHD release, utilizing a 2160p HEVC-encoded transfer with HDR10 high dynamic range, is likely more representative of how I remember those 35mm film presentations appearing than the overly vivid and bright presentation on the included 1080p Blu-ray. This is a noticeably darker transfer, with more subdued colors, but also takes on a more film-like appearance to my eyes. Like the 1080p Blu-ray, though, film grain has been all but scrubbed away to the point of being almost completely unnoticeable. There is no real noticeable increase in detail, either. There will likely be some who prefer the 1080p Blu-ray over this, and I can understand, as that is more or less how it has been presented on various home video formats going back to VHS and Laserdisc – bright and vivid throughout.

The UHD’s Dolby Atmos track builds on the wide and spacious 7.1 track created for the previous Blu-ray release, adding a limited sense of immersion by pushing music and a few sound effects to the height speakers. Otherwise, I thought the Atmos track sounded very similar to the Blu-ray’s DTS-HD MA 7.1. As Matt Hough noted in his review of the 3D Blu-ray release:

There are numerous instances of split sound effects which are placed in the fronts and rears and which occasionally pan through the soundstage with expressive use of the LFE channel on several occasions. The wonderful orchestrations for Alan Menken’s tuneful score place varying instruments in their own part of the audio field for a terrific sense of immersion into the music. Dialogue has been masterfully recorded and has been placed in the center channel.

All of the Special Features can be found on the Blu-ray, with many (but not all) “legacy” features available on various Movies Anywhere retailers when you redeem your digital copy.

Alan Menken and the Leading Ladies (1080p; 15:45): Menken is joined by Jodi Benson (The Little Mermaid), Judy Kuhn (Pocahontas), Lillias White (Hercules), and Donna Murphy (Tangled) as they discuss the main songs co-written by Menken for each actress.

What I Want From You Is… Your Voice (1080p; 5:47): Voice actors Buddy Hacket (Scuttle), Samuel E. Wright (Sebastian), Will Ryan (Sea Horse), Jodi Benson (Ariel), and Pat Carroll (Ursula) talk about their characters and record their lines in archival video.

Stories from Walt’s Office: Gadgets & Gizmos (1080p; 6:01): The latest in a series of tours of Walt’s office, this time focusing on, you guessed it, gadgets, trinkets, and miniature figurines.

#Treasuresuntold (1080p; 5:40): Olivia Sanabia and Ruby Rose Turner of the Disney Channel series Coop & Cami Ask the World present a brief easter egg hunt for trivia from The Little Mermaid. Not to be confused with the 45-minute documentary Treasures Untold that was included on the previous Blu-ray release and not included here (or even digitally).

Audio Commentary with Directors Ron Clements and John Musker and Composer Alan Menken: The three men discuss making the movie, with some help from archival interviews with Howard Ashman.

Classic Bonus Preview (1080p; 1:09): A trailer for some of the archival bonus material that can be accessed on select digital retailers when redeeming your digital copy.

Digital Copy: An insert contains a code to redeem a digital copy (in UHD where available) on Movies Anywhere. Redeeming your code on Movies Anywhere also unlocks an exclusive special feature: “Part of Your World” – A Look Back.

There are some who will really enjoy Disney’s new 4K version of The Little Mermaid, and some who won’t. Then there is the issue of many missing special features that are not even available digitally with this version (although they are available if you had redeemed the digital copy from the previous Blu-ray edition).

I’ll stick to my 3D release

As much as I want to support this release I can't justify a purchase.

Does this release fix the video errors from the previous Blu-ray?

I may upgrade at a later date when DMC offers it either as a main selection or maybe at a discount with another main selection.
Just the completist in me.

Matt A said:
Does this release fix the video errors from the previous Blu-ray?
Click to expand...

If you're referring to the issue with a pair of shots in Part of Your World being out of order, Disney fixed that when the original disc came out. They had an exchange program for the corrected disc. I know this because I did this to get the corrected disc.

Jake Lipson said:
If you're referring to the issue with a pair of shots in Part of Your World being out of order, Disney fixed that when the original disc came out. They had an exchange program for the corrected disc. I know this because I did this to get the corrected disc.

This new Signature Collection release is a new transfer entirely, so theoretically, those issues shouldn't reappear here.
Click to expand...

I was indeed talking about the switched shots. This is great to know. Thanks!
You must log in or register to reply here. 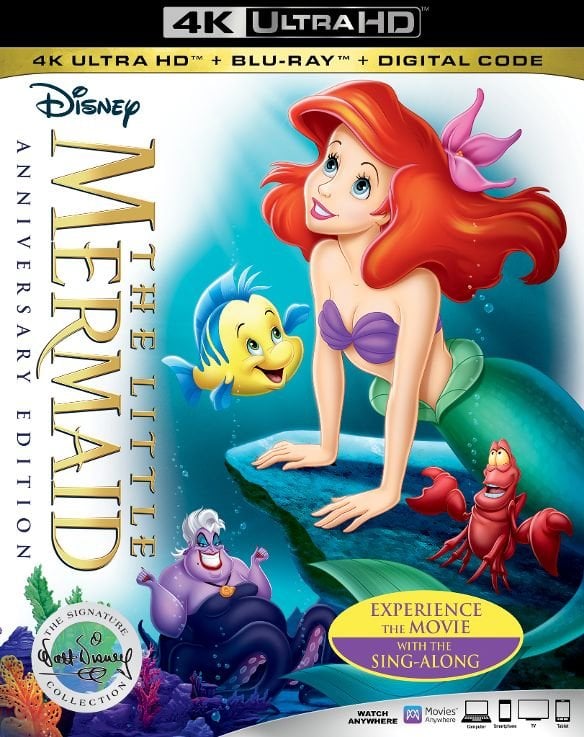