Forum List What's new Dark Style Change width
Log in Register
What's new Search
Menu
Log in
Register
Navigation
Install the app
More options
Dark Style
Close Menu
Posted on September 22, 2019 by Timothy Bodzioney
You are using an out of date browser. It may not display this or other websites correctly.
You should upgrade or use an alternative browser.
Highly recommended 4 Stars

Shout! Factory, under their Scream Factory line has released producer Val Lewton’s 1943 The Leopard Man on Blu Ray, their third and hopefully not last Lewton title to date.  It is a beautiful transfer of a largely underrated horror/mystery film, easily looking better than it has on any home video format.

The Leopard Man was Val Lewton’s third and final collaboration with director Jacques Tourneur which began in 1942 with The Cat People and I Walked A Zombie and ended the following year with this film.  The Leopard Man is generally considered to be the weakest of the three movies.  I underrated it for years but watching it three times in preparation for this review gave me a greater appreciation of the movie.

The Leopard Man opens in the night club dressing room of rehearsing Flamenco dancer Clo-Clo (Margo).  Her clicking castanets annoy Kiki, (Jean Brooks) the singer in the dressing room next door.  Kiki’s manager Jerry Manning (Dennis O’Keefe) enters his client’s dressing room following a leopard on a leash.  He has cooked up the gimmick of renting the leopard from local Native American sideshow owner, Charlie How-Come (Abner Biberman) and having Kiki upstage Clo-Clo by entering the night club with the leopard while Clo-Clo performs her dance routine.  Sure, sounds safe to me.

While Clo-Clo dances Kiki makes a stunning entrance decked out in an evening gown, with the leopard on a leash.  The room falls silent as all eyes focus on Kiki and the feline.  Clo-Clo, not to be upstaged dances to the singer and leopard clicking her castanets – taunting the poor creature; this, in turn, scares the leopard who pulls free of Kiki’s grip.

That’s the set-up, and what follows are three murders and the hunt for the murderous cat.

The Leopard Man, like several of the Lewton movies, is not really a horror movie, at least a conventional one.  Based on the novel, Black Alibi by Cornell Woolrich is more of a whodunnit.  The leading man enlisting the help of a female is used in other Woolrich stories including Phantom Lady and Rear Window.  In some ways, it is closer to what would eventually be called Giallo than a conventional horror/monster movie.  Woolrich, for better or worse is not given enough credit as a source of inspiration for that genre.

Watching the movie this time, I was struck by the structure of the script by screenwriter Ardel Wray; it isn’t a conventional three-act structure that builds to a climax; the script sort of wanders, introducing new characters as they interact/cross paths with already introduced characters and following them and their storyline while Manning and Kiki search for the leopard/murderer.  There is a wonderful sidetrack, seemingly having nothing to do with the plot involving Clo-Clo and a generous rich widower while his pretentious and avaricious daughter and son-in-law watch with contemptuous disapproval.  His kind-hearted generosity leads to death.

If you are concerned with spoilers skip the next part, though I will try and not give away too much.  The three murder victims are all young females, one is from a very poor family, one is from a wealthy family, both appear to be pious and neither have anything to do with the inciting incident, their deaths are arbitrary, almost a matter of proximity.  This is perhaps the most horror-related element of the film – death comes even to the young and innocent and doesn’t run background or credit checks before striking.  A distasteful trope of later horror films is young people, but particularly girls being punished for transgressive behavior.

The third victim is more directly related to the events that preceded, though her death seems unfair because authority figures in the film go out of their way to absolve the not-too-far ahead thinking Manning of any guilt, while this character pays with her life.  The first two deaths are inexplicable, while the third seems a bit like payback and that sort of undermines the dramatic point of the first two deaths.  Manning and Kiki are spared any real suffering and even are rewarded by discovering their latent feelings for one another.

There is nothing supernatural in The Leopard Man.  There are red herrings pointing in that direction such as Charlie How-Come’s fear that his alcoholic blackouts are really transformations, similar to those of Larry Talbot’s at Universal, and he has himself locked up to prevent his harming anyone in the future.  There is also Isabel Jewell’s wonderful, cigarette dangling, weary fortune teller.  Her cards always seem to point to death but even a broken clock is right twice a day.  Both of these characters better illustrate the effects of poverty and lack of education than any higher, spooky powers.

The Leopard Man is expertly directed by Tourneur.  It is a triumph of style over a not always logical script.  It incorporates some of the elements used in the first two Lewton films.  The high contrast photography incorporating deep shadows that would soon become associated with Film Noir is used to cover up the limited budget.  Like the other films, Tourneur doesn’t show the murders.  In fact, the murder of the poor girl is perhaps the scariest scene in the whole Lewton cycle and with the exception of a thin streak of blood running under a door, nothing is shown.  The violence takes place off-screen and is accompanied by the girls pleading voice that turns into screams and the sound of the mauling beast.  It’s a terrifying use of image and sound.

Because the plot dictates, the second and third murders are even less graphic, but the build-ups are similar.  Tourneur uses sound effectively.  The clicking of the castanets on an otherwise silent soundtrack creates a mounting sense of tension.  Tourneur also silently builds tension and pays off with something unrelated entering the frame accompanied by a loud noise, an effective trick used in the earlier films.

In typical studio thinking, the executives broke up the Lewton Tourneur team after this film figuring that the two of them were worth twice as much as together.  They may have been right in the short term, which after all is how most administrations, show biz or otherwise think, though it is sad to think of what they robbed viewers of, as this would be Tourneur’s last horror film for over 15 years.

Andrew Sarris underrates Tourneur and puts him in his Expressive Esoterica category stating that he’s too tasteful.  Tourneur directed one of the definite Noirs, Out of the Past as well as directing several very good westerns including Canyon Passage, Stranger on Horseback, and Wichita and perhaps the most Fordian western not directed by Ford, the excellent Stars in My Crown.  Sarris writes about Tourneur’s westerns while barely acknowledging his work in horror!  It makes one wonder if Sarris was familiar with the horror films at all.  Tourneur’s ‘tastefulness’ is what makes his horror films stand out as memorable in a sea of otherwise fun, but obvious fare. Compare Tourneur’s 1958 Curse of the Demon to similar Columbia Pictures horror fare of the era; I’ll go with Tourneur any day.

Shout! Factory’s transfer of The Leopard Man is very good.  Not quite as good as their transfer of The Body Snatcher, but close.  It doesn’t say it on the case of the disc, but it too is a 4K scan of the original nitrate negative according to promotional information.  Robert DeGrasse’s (Stage Door, The Body Snatcher, and The Dick Van Dyke Show) photography is simply stunning with its smooth grays and deep shadows making the most of Art Directors Albert S. D’Agostino and Walter E. Keller’s wonderful sets.  The film takes place in a set bound Albuquerque that is more atmospheric than the real place.

The DTS-HD Master 2.0 mono soundtrack is very good.  As I wrote above, the film is edited in such way that silence is used as effectively as sound.  Those castanets are haunting.  The disc includes subtitles.

A new audio commentary by filmmaker/film historian Constantine Nasr.  This was a very informative commentary filled with production details and insights.  Nasr states that Cornell Woolrich’s Black Alibi was the book Lewton took along with him when he interviewed with RKO executives and intended it to be his unit’s first production.  I actually prefer Nasr’s commentaries without Steve Haberman.

An older commentary ported over from the old Warners’ DVD with director William Friedkin.  This was a major surprise because I was expecting something entirely different but Friedkin gives a masterful analysis of the script.  It’s a disciplined commentary that pretty much sticks to the contents of the script.  It too is very insightful.

I first saw The Leopard Man along with Curse of the Cat People and Isle of the Dead on a triple bill at a suburban Cleveland multiplex in March of 1977.  These were the first Lewton films I ever saw and was completely taken by their visual beauty along with their originality and uniqueness.   The Lewton films, like most great movies, change as one ages.  I’ve seen The Leopard Man probably about ten times in the 42 years since I first saw it and notice and feel new things upon each viewing.  You can’t say that about House of Dracula (though I still love it).

Shout! Factory is to be praised and supported for releasing the Lewton films looking as gorgeous as the three they’ve released.  There is an online rumor that the series is being discontinued due to lack of support; I pray this isn’t true.

So where is the Leopard Man?

It's a beautiful blu-ray and a beautiful movie!
You must log in or register to reply here. 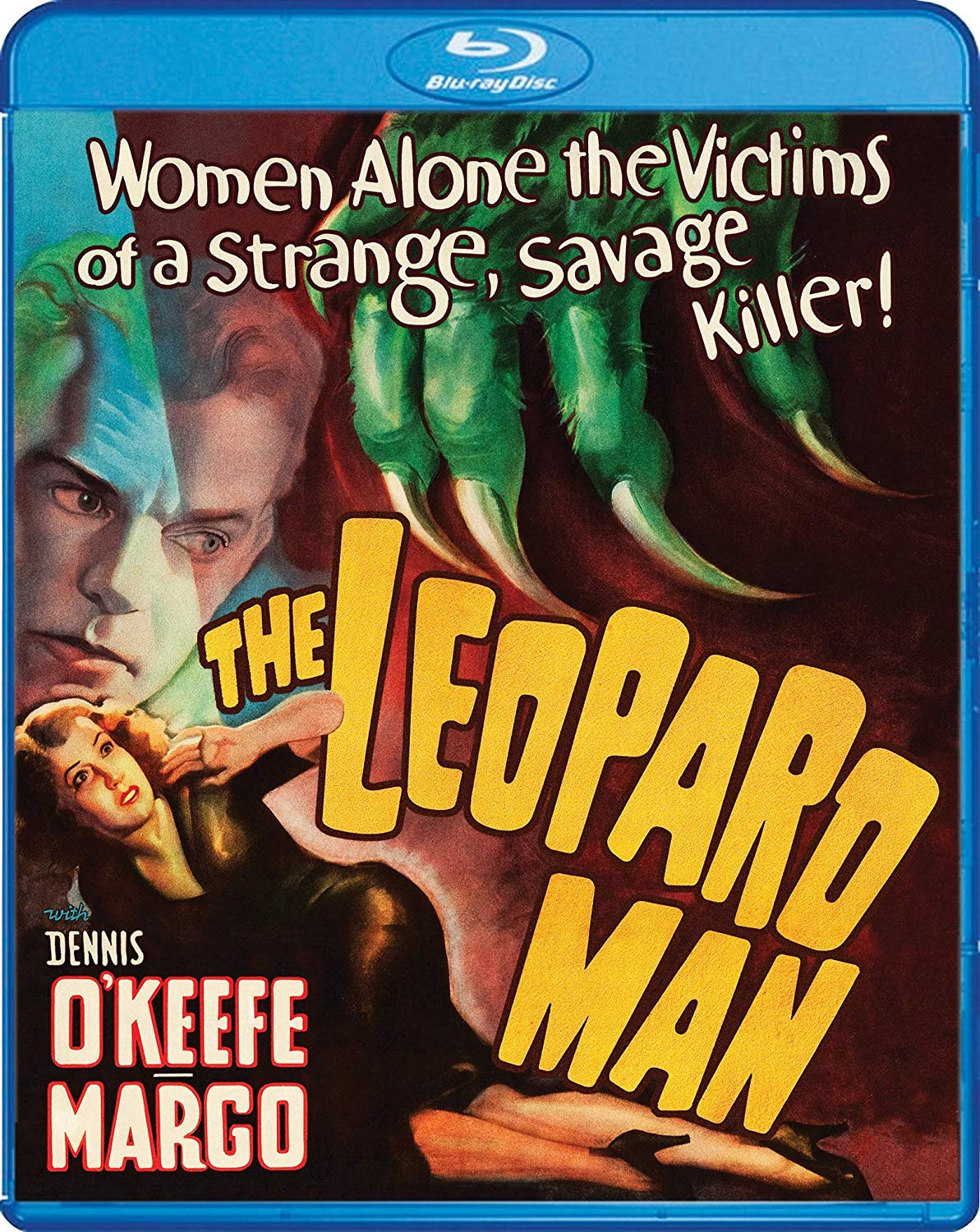