Posted on May 7, 2019 by Todd Erwin
Not quite as awesome the second time around. 4 Stars

The LEGO Movie 2: The Second Part is at times a fun and entertaining movie, but lacks the charm and originality of the first entry.

Picking up where The LEGO Movie ended, The LEGO Movie 2: The Second Part shows us the aftermath of five years of invasions by DUPLO aliens on Bricksburg, laying waste to what eventually becomes Apocalypseburg, with plenty of references to Mad Max: Fury Road and the original Planet of the Apes. Emmet (voiced by Chris Pratt) is still the annoyingly positive and cheery hero way out of his element who still listens to various cover versions of Everything is Awesome despite the bleakness surrounding him, while his girlfriend Lucy (voiced by Elizabeth Banks) continues to become more brooding and wishes Emmet would grow up. One day, General Sweet Mayhem (voiced by Stephanie Beatriz) arrives from the Systar System, attacking Apocalypseburg until seemingly defeated by Batman (voiced by Will Arnett), Lucy, and the rest of the citizens. That is, until she takes Batman, Lucy, Benny (voiced by Charlie Day), Unikitty (voiced by Alison Brie), and MetalBeard (voiced by Nick Offerman) hostage in her spaceship headed back to the Systar System. She delivers them to Queen Watevra Wa’Nabi (voiced by Tiffany Haddish), who’s ultimate plan is to marry Batman in what seems to be a dastardly plot. Emmet has converted his house into a spaceship and follows them to the Systar System, joined by the rugged and masculine Rex (also voiced by Chris Pratt), hoping to rescue his friends.

The LEGO Movie 2: The Second Part tries to build on the previous movie without really breaking any new ground, often relying on what worked well in the first film. Unfortunately, it lacks the charm and originality of that first film, a surprise hit that came out of nowhere during a big lull in family entertainment at the box office. It’s not a bad film, and does try to tell the younger sister’s side of the LEGO story and deals with sibling rivalry. The movie does have a few funny moments (most parents will likely feel the pain the kids’ mother played by Maya Rudolph endures when stepping on a LEGO brick in her bare feet during one of the few live action sequences), but is never as funny as the first film or even the spinoff LEGO Batman Movie.

The LEGO Movie 2 is, for the most part, a CG animated film, and was rendered as a 2K digital intermediate with Dolby Vision high dynamic range for its premium format theatrical engagements. Warner’s 2160p HEVC-encoded upscale uses HDR10 high dynamic range, with results that give this UHD release a slight edge over the Blu-ray counterpart. There is a perceived uptick in resolution, but that may have more to do with HDR10’s ability to provide a wider color gamut, allowing for more controlled shading of textures in the digital LEGO bricks used to create virtually everything in this movie. Colors are more vivid without ever blooming, although some may feel that, overall, the image is slightly darker than what appears on the included Blu-ray.

Surprise, surprise – the default audio track on both the UHD and Blu-ray on The LEGO Movie 2 is Dolby Atmos, and not the included (and redundant) DTS-HD MA 5.1 track as we have seen on so many other Warner releases. While not necessarily a demo-worthy mix, the Atmos track is wide and expansive once you turn up the volume a few notches above the normal listening position. Effects and music are spread nicely and with pinpoint accuracy within the listening area, with good LFE enhancement providing a solid low-end. Heights are used rather sparingly (the BIG exception is the lid lowering over the storage bin from Lucy’s POV – you’d swear someone above you was lowering that lid on your head). Dialogue is clear and understandable throughout all the chaos and mayhem.

With the exception of the commentary track, all of the special features can be found on the included Blu-ray edition.

Everything is Awesome Sing-Along (1080p; 112:26): The movie is presented after a brief introduction that explains hoe the various lyrics, favorite lines of dialogue, and trivia will be displayed during this alternate presentation of the movie, sadly only in Dolby Digital 2.0.

Emmet’s Holiday Party: A LEGO Movie Short (1080p; 2:43): A holiday-themed short with Emmet preparing for a big Christmas party that feels more like a holiday-themed trailer.

The LEGO Movie 2: The Second Part is at times a fun and entertaining movie, but lacks the charm and originality of the first entry. Video and Audio presentation are very good, but the special features are rather ho-hum. 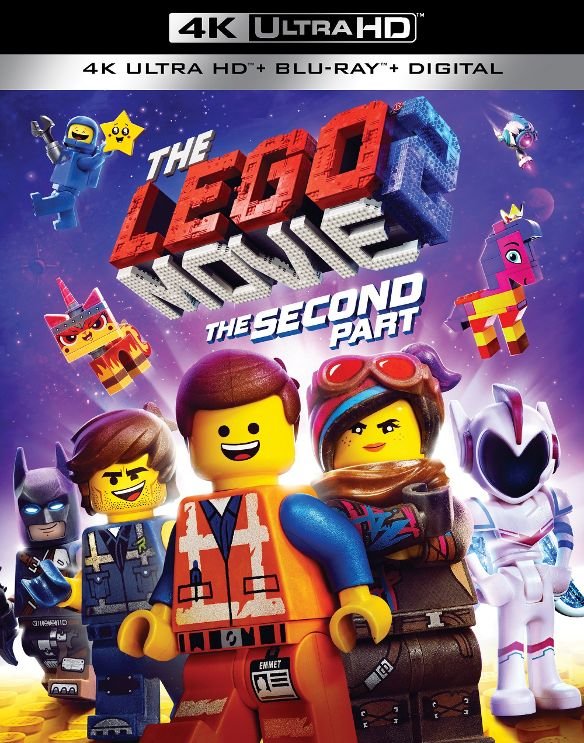