Forum List What's new Dark Style Change width
Log in Register
What's new Search
Menu
Log in
Register
Navigation
Install the app
More options
Dark Style
Close Menu
Posted on September 1, 2019 by t1g3r5fan
You are using an out of date browser. It may not display this or other websites correctly.
You should upgrade or use an alternative browser.
Silent era Universal Horror debuts on home video 4 Stars

With the dawn of the talkies, studios were busy either filming with the new sound technology or converting ongoing and old silent productions into sound versions for the market to enjoy. Universal, at the time one of the lower tiered major studios, didn’t really have the same financial clout as the other major studios, so they still made silents while producing partial talkie versions of their silents and sent them out to theaters. One of these productions that was made both ways was The Last Warning, a mystery film with horror overtones guided by one of their top directors at the time, Paul Leni. Long unavailable on home video, Flicker Alley has licensed a recent restoration of the movie for its home video debut on a Blu-ray/DVD dual format edition.

On opening night for the Broadway play “The Snare”, actor John Woodford dies under mysterious circumstances and the entire cast falls under suspicion. When the body disappears, the case goes cold and the theater that bore Woodford’s name is shut down. A few years later, the theater is opened up by a new producer who plans to use “The Snare” and its original cast to help finally solve the mystery, but will history repeat itself?

Made to capitalize on the success of The Cat and the Canary (1927), The Last Warning is a solid little mystery with some touches of horror mixed in. Director Paul Leni creates a vivid visual sense right from the start (the multi layered montage of Broadway is prime example of this), luring us into the story and the mystery that unfolds. One of the key critiques against the film is that the plot doesn’t always make sense and is sometimes incoherent (this was made more apparent in the sound version of the movie – which is sadly not presented alongside the silent version in this release); the performances as well as the visuals help to offset some of these plot flaws to a degree. There are also comic touches present as well, but not to the same degree as Leni’s The Cat and the Canary, as the mystery and horror elements take center stage here (no pun intended). In short, The Last Warning should be remembered as a stylish – if a little silly – mystery that represented a stepping stone in the development of the Universal Horror we now know as well as a final hurrah for its inventive and innovative director, who tragically died shortly after the film’s release from blood poisoning caused by a tooth abscess at the relatively young age of 44.

Universal contract star Laura La Plante handles her leading role quite well; some may notice similarities between this part and her earlier “damsel in the distress” part in The Cat and the Canary. Character actor (and frequent heavy) Montagu Love adds an air of mystery and charm as the maverick producer wanting to restage the play; Roy D’Arcy is notable as the roguish leading man of the play’s restaging. Carrie Daumery (in her lone billed silent film – she made frequent unbilled appearances in others) is memorable as a cast member of the original play, while Margaret Livingston (best known as “the woman from the city” in F.W. Murnau’s immortal Sunrise) is a vivacious new cast member caught up in the spooky proceedings. Also worth mentioning are John Boles as the leading man with eyes for La Plante, Burr McIntosh and Mack Swain as a pair of rich brothers who own the theater, Bert Roach as the stage manager, Slim Summerville and Torben Meyer as a pair of nervous stage hands, and D’Arcy Corrigan as the ill-fated Woodford himself.

The silent version is presented in its original 1:19:1 aspect ratio, courtesy of a 4K restoration of surviving film elements done by Universal. Film grain is organic throughout with fine details rendered faithfully; there are age related issues like scratches present, but that’s likely owing to the condition of the elements used for the restoration. Overall, the film looks great for its home video debut and likely will the be the best it’ll ever look.

The movie is presented with a new film score by Arthur Barrow, presented on a DTS-HD Master Audio track for this release. As it’s only a music based track, there’s great ambiance, fidelity, and direction in the track with little to no problems with it. Overall, a great score to compliment the film.

Paul Leni and The Last Warning (9:54) – A visual essay on the film and its director; narrated by John Soister.

Rare Image Gallery – A collection of production stills (8), behind the scenes photos (3), film posters (2), and trade ads (21) are presented in slideshow mode.

A DVD of the movie is also included with the same special features as above.

As an early stepping stone in the development of Universal Horror, The Last Warning is an entertaining little mystery with a few chills and humor mixed in. Flicker Alley should be commended for reviving the movie for its home video debut, with a very good presentation of the silent version and some decent (if somewhat limited) special features to complement the film. Recommended for fans of silent films and Universal Horror. 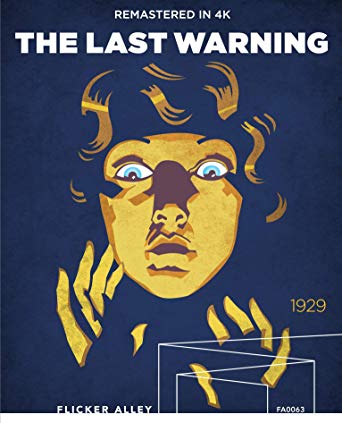