Forum List What's new Dark Style Change width
Log in Register
What's new Search
Menu
Log in
Register
Navigation
Install the app
More options
Dark Style
Close Menu
Posted on November 21, 2018 by Todd Erwin
You are using an out of date browser. It may not display this or other websites correctly.
You should upgrade or use an alternative browser.
Left-wing black comedy that overstays its welcome 3 Stars

In The Last Supper, five left-wing college grad students invite right-wing stereotypes to one final meal. It all starts when Pete (Ron Eldard) is given a ride home during a torrential rain storm when his car breaks down by Zach (Bill Paxton), a Desert Storm veteran and racist. Pete’s friends and roommates, Jude (Cameron Diaz), Paulie (Annabeth Gish), Marc (Jonathan Penner) and Luke (Courtney B. Vance) invite Zach to join them for dinner, where the conversation becomes heated as the hosts try to prod reactions from Zach (and vice versa). This leads to Zach holding a knife to Marc’s throat and breaking Pete’s arm when attempting to disarm him. In a fit of rage and an attempt to free Pete, Marc stabs Zach in the back, killing him. The five friends then begin to discuss, “What if you could go back in time and kill Hitler before he even began his rise to power” and the lives it would have saved.  They bury Zach in their tomato garden and ditch his truck, then begin a weekly dinner party, inviting other “right-wing” fanatics and eventually poisoning them if they are unable to change the guest’s minds. Those guest include a homophobic reverend (Charles Durning), a misogynistic male (Mark Harmon), an anti-abortion activist (Rachel Chagall), and an environmentalist (Jason Alexander). While their tomato plants blossom, the local Sherriff (Nora Dunn) has been investigating the disappearance of a young girl, leading her to question the five roommates since the trail from Zach’s truck that she found keeps tracing back to them. Things get more complicated at the Sunday dinners, though, when a librarian refuses to drink the wine, forcing one of the hosts to take alternate matters, and a teenage family-values activist causes a split in the group over moralistic issues due to her age. That is, until they reel in the big fish, Norman Arbuthnot (Ron Perlman), a Rush Limbaugh-type talk show host.

The Last Supper is a very uneven black comedy, sometimes going too broad in its humor (Pete’s cries of “Owie, owie” after Zach breaks his arm is an example). The humor is mostly political, so your laugh mileage may vary depending on your views. Although the film has a brief running time of 91 minutes, I felt that it ran too long and would have fit better as an episode of an hour-long anthology series, and the staging often felt more like a stage play adapted for film (writer Dan Rosen later adapted his screenplay for the stage).

The Last Supper arrives on Blu-ray as part of Sony’s MOD program, understandably as the movie is likely not very well-known despite its familiar cast. The disc I received for review was actually a pressed or replicated BD-25, so perhaps Sony is following in Warner Archives’ footsteps by issuing BD-R discs after the first run is exhausted. The Last Supper is a mid 1990s independently produced film made on a modest budget (and lots of favors called in), and that does show in several shots that are very noticeably just out of focus. Overall, the movie is a tad soft, although there are shots that contain some excellent fine detail, such as out of place strands of hair on Cameron Diaz or fabric textures in some of the costumes. Contrast is decent, but some shots also appear as if they may have been under lit. I do not think the transfer is to blame, but more so the source material.

The Last Supper is equipped with a very good DTS-HD MA 2.0 stereo track that achieves its task of delivering clear and understandable dialogue and a wider and deeper soundstage for its 1980s and 1990s soundtrack featuring the songs I’m Your Boogie Man and Get Down Tonight by KC and the Sunshine Band, contaminated Minds by UB40, and Shonen Knife’s cover of the Carpenter’s Top of the World.

This is a very barebones disc, with no features or trailers whatsoever.

Despite its recognizable cast, The Last Supper overstays its welcome and wears its political slant on its sleeve. Fans of the film will likely be happy just to have the movie in HD and on physical disc.

This is one of my mostest favorite movies. I'll wait for a cheaper price though thanks to your review. The DVD isn't too bad. A real shame they couldn't afford some extras, at least interviews with Title and Penner.
You must log in or register to reply here. 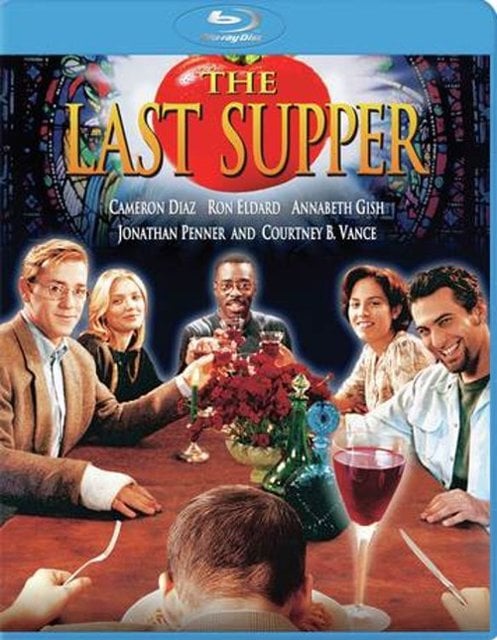