The Kitchen, based on the DC Vertigo short-run comic book series by Ollie Masters and Ming Doyle, had the potential to be a female-driven Mean Streets or Goodfellas, but the film tries to pack in too much plot for its short 102-minute running time.

When their Irish mob husbands are arrested for holding up a liquor store in Hell’s Kitchen and sentenced to three years in prison, Kathy Brennan (Melissa McCarthy), Ruby O’Carroll (Tiffany Haddish), and Claire Walsh (Elizabeth Moss) find themselves taking over the family business of providing “protection” to local businesses from other criminal activities. This does not sit well with new mob boss Little Jackie (Myk Watford), who was supposed to take care of the women while their husbands served their sentence, but instead was skimming the three women of their “allowances” to help them get by. When Little Jackie is taken out of the picture by Gabriel (Domhnall Gleeson) for trying to rape Claire, the three women hire Gabriel as their main muscle to take control of the neighborhood and forge a partnership with the Italian mob in Brooklyn. It all comes to a head when the husbands are released early, with contracts out on the three women, and one of the three trying to push the other two out.

The Kitchen could have been a much better movie or possibly a mini-series under a more established director. Andrea Berloff makes her directorial debut with this film (she also adapted the screenplay), and tries too hard to condense the story into a movie running under two hours. Subplots are introduced that never come to a satisfying conclusion and much of the third act seems to come out of nowhere (but explained in a fairly eye-rolling flashback). Where The Kitchen does excel is in its performances by McCarthy, Haddish, Moss, and Gleeson, and the movie’s production and cosutme design and music supervision absolutely nail late 1970’s New York to perfection. Even the opening logos for Warner Bros and New Line replicate their late 1970s style.

The Kitchen was captured at 2.8K resolution and completed as a 2K digital intermediate. Warner has opted to release the film on physical media as individual Blu-ray and DVD discs (no combo packs, although a digital copy has been included on both). The AVC-encoded 1080p transfer, which retains the film’s theatrical aspect ratio of 2.39:1, is a splendid affair with bold 1970s colors that never appear over saturated. Black levels are deep with no noticeable crush and excellent shadow details. Overall, detail is also excellent, from the polyester fabric textures to facial features of the actors. The movie is available from select retailers in UHD as a digital stream.

Default audio on the disc is a very solid DTS-HD MA 5.1 track that has a wide dynamic range and good surround activity. LFE is impressive, helping to give an additional low-end boost to gunshots and the 1970’s rock soundtrack. Dialogue is clear and understandable throughout.

Running Hell’s Kitchen (1080p; 9:01): Writer-director Andrea Berloff, along with key members of the cast and crew, discuss bringing the comic book to the big screen.

Digital Copy: An insert contains a code to redeem a digital copy from Movies Anywhere.

The Kitchen is a great looking film that, unfortunately, does not live up to the expectations of being a female-centric mob story along the lines of Mean Streets or Goodfellas. 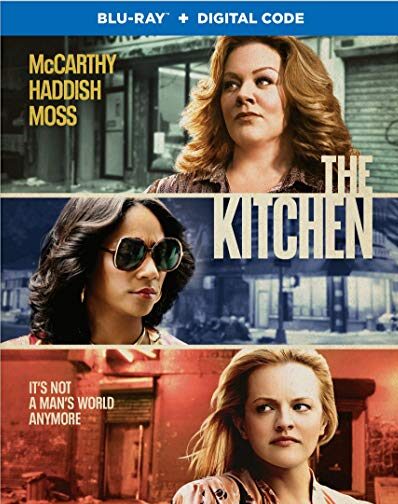