Director Judd Apatow’s latest movie, The King of Staten Island, arrives on Blu-ray loaded to the gills with special features.

Inspired by the early life of Saturday Night Live cast member Pete Davidson (who co-wrote the screenplay with SNL writing partner Dave Sirus and director Judd Apatow), The King of Staten Island is a coming of age story of lost soul Scott Carlin (Davidson), a 24-year old still living at home with his widowed mother, spending most of his time smoking marijuana, tattooing his friends, hanging out in each other’s basements wasting away watching cartoons and movies like The Purge, and starting a casual relationship with longtime friend Kelsey (Bel Powley). Scott has never been the same since his firefighter father was killed on duty while saving a family from a burning building during 9/11 when Scott was seven years old. His younger sister Claire (Maude Apatow), who was three years old at the time of their father’s passing, was unaffected and is about to lave for college with her best friend. Their mother, Margie (Marisa Tomei), has been struggling to hold down two jobs as both a school nurse and ER nurse to make ends meet while constantly worrying about her troubled son Scott. When Scott gives a young boy, Harold (Luke David Blum), a tattoo, Harold runs off screaming in pain before Scott has barely started. Harold’s father, Ray (Bill Burr), shows up on Margie’s doorstep demanding restitution to have the partial tattoo removed. Ray and Margie, though, begin dating, the first time Margie has dated since her husband’s death. This does not sit well with Scott, who has now been asked to move out by Margie, which means finding a job in order to cover his new living expenses. To compound matters, Kelsey admits that she wants something more than just a casual relationship, another thing that Scott can’t seem to handle. Scott soon learns, as he begins to take on some responsibilities, what it means to be a (somewhat) responsible adult, contribute to society, and express his feelings.

It could be easy to dismiss The King of Staten Island as a failed attempt at humor and a character study about an unlikeable character. Personally, I do not see this film as a comedy; instead, this is a character study leaning more towards dramedy. Director Judd Apatow does not rely on jokes or slapstick situations; the comedy comes more out of the relationships and situations the characters find themselves in, which I found refreshing. The look and feel of The King of Staten Island is more of an independent production than one from a major studio. Scott may seem unlikeable at first, but he is a kid with some serious emotional problems that finally realizes that he needs to try harder to overcome them if he wants to survive. The film is full of excellent performances, first and foremost is Marisa Tomei as Scott’s mother, who really makes acting look effortless in her portrayal of Margie. The other real surprise is comedian Pete Davidson, who shows some real range as an actor, something he has never been able to achieve on Saturday Night Live.

The King of Staten Island was shot on 35mm film in the Super 35 format and completed as a 4K digital intermediate with an aspect ratio of 2.39:1. Universal has decided, at least for now, to release the film only on Blu-ray and DVD for physical media (it is available in 4K on digital). This is a very good 1080p AVC-encoded transfer, with excellent detail and bold, natural colors that never appear oversaturated. Contrast is a little weak, with black levels only capable of delivering really dark grey at best.

Universal has provided a Dolby Atmos track that almost feels like overkill for a film of this type. This is a dialogue-driven film, which comes across crystal clear and directed mostly to the center channel. Surrounds are used sparingly, mostly for atmospherics and music extension, and overheads only kick in for further immersion during a few key sequences, such as the two college parties, the baseball game, and the firefighting field trip. LFE is very strong, adding extra low-end emphasis to the hip-hop music tracks.

The Blu-ray release of The King of Staten Island is chock full of special features, many of which, however, are in standard definition, likely due to disc space constraints, with the movie and special features utilizing nearly 44 GB of a BD50 disc. The good news is that the special features are available in HD on most digital platforms when redeeming the included Movies Anywhere code.

Alternate Endings (Which Didn’t Work) (1080p; 3:51): Two endings are included – Family Breakfast and Career Day (which is actually kind of cute on its own).

Line-O-Rama (1080p; 4:37): What would a Judd Apatow movie be without multiple alternate takes of the same line?

Judd Apatow’s Production Diaries (480i; 31:44): Apatow walks us through the production of the film.

Margie Knows Best: Working with Marisa Tomei (480i; 3:21): A look at Marisa Tomei’s character and her performance.

Friends with Benefits: Working with Bel Powley (480i; 3:54): A look at Bel Powley’s character and her performance.

Sibling Rivalry: Working with Maude Apatow (480i; 4:35): A look at Maude Apatow’s character and her performance, plus her bonding with Pete Davidson’s real sister and the father-daughter component (Maude is Judd’s daughter).

Best Friends: Working with Ricky, Moises, & Lou (480i; 3:56): Casting some of Pete Davidson’s friends to play his character’s on-screen friends.

Papa: Working with Steve Buscemi (480i; 2:51): A look at Steve Buscemi’s character and his performance, as well as his background as a fireman.

The King of Staten Island is a surprisingly interesting character study and semi-autobiographical story of actor/comedian Pete Davidson’s early life growing up on Staten Island.

Thanks for your review, Todd. I'm not sure about a blind purchase but I might rent this now that its premium-priced VOD period has ended and it can be seen for regular prices.

It was worth the two bucks at the Redbox, but I'm definitely glad I didn't purchase it.
Reactions: Jake Lipson 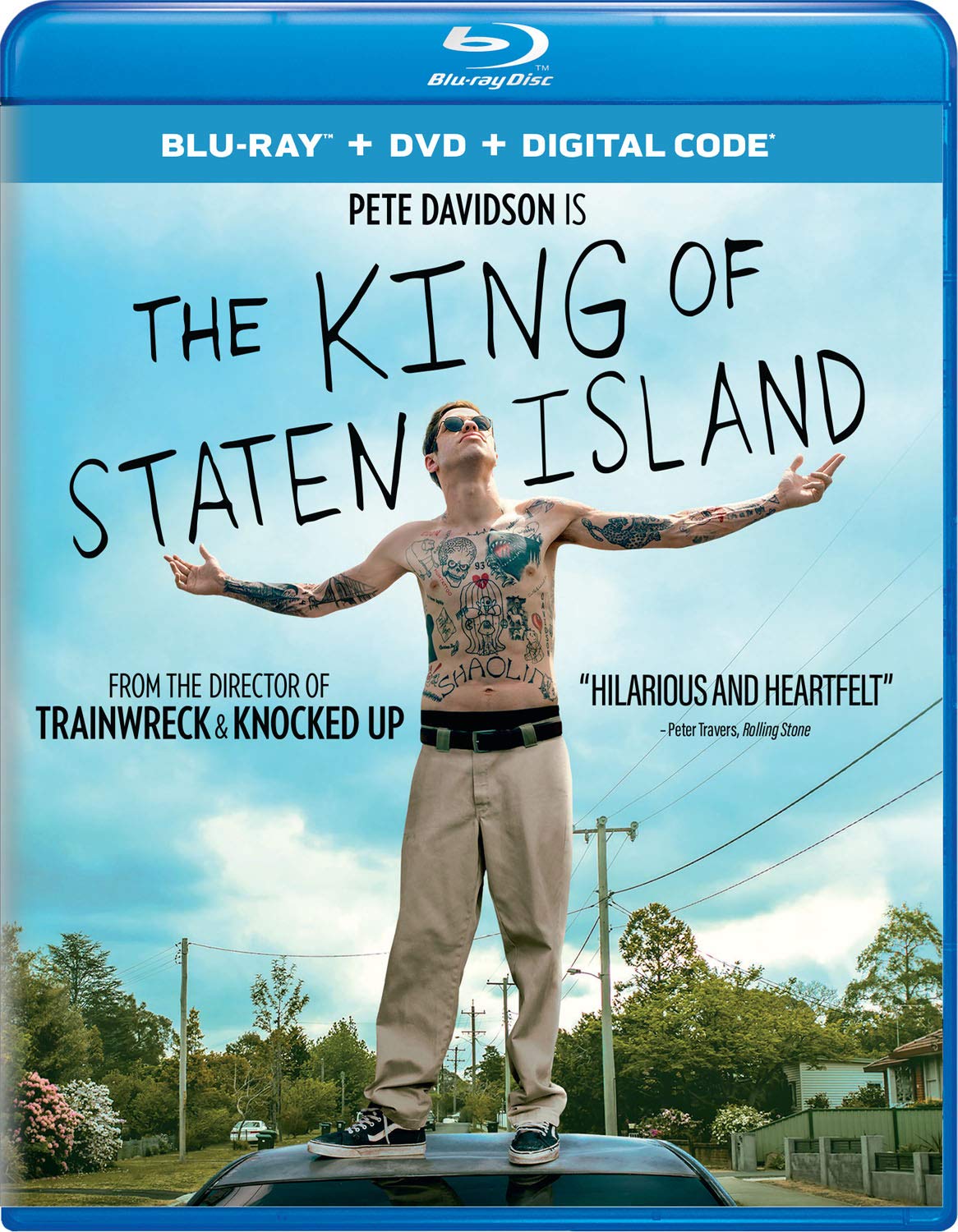