John Frankenheimer’s The Iceman Cometh brings one of Eugene O’Neill’s greatest and most accessible plays to audiences in a wonderfully nuanced presentation.

The American Film Theatre was an ambitious, subscription-based experiment which lasted from 1973-1975 in which distinguished plays and musicals, lacking in broad, general cinematic appeal but containing important themes and ideas, could be brought to a more thoughtful and discerning movie going audience. Over its two seasons of existence, fourteen films were presented: eight in its initial season and six in the follow-up season. While season subscription ticketing snafus and the limited availability of play dates (four performances only over a two-day period) plagued the series and prevented it from becoming a massive hit, the project did produce many wonderful, worthwhile film versions of plays and offered inspired performances which might otherwise have faded into the mists of time had they not been captured on film. Perhaps the most impressive of the fourteen productions was the ambitious four-hour movie version of Eugene O’Neill’s masterful character drama The Iceman Cometh with a star-laden cast bringing forth one of O’Neill’s seminal dramas all under the expert hand of director John Frankenheimer.

It’s 1912, and the melancholy, drunken patrons of a New York City dive bar await the arrival of fun-loving, over-generous salesman and drinking buddy Theodore Hickman (Lee Marvin). Known to the regulars of the watering hole as Hickey, he shocks them all by passionately encouraging his fellow alcoholics to give up their pipe dreams and embrace their harsh realities. There’s the bar owner Harry Hope (Fredric March) who hasn’t stepped outside the bar in two decades since the death of his beloved wife. There’s faded anarchist Larry Slade (Robert Ryan) who claims to have given up his illusions and is merely waiting to die. There’s tough barkeep Rocky (Tom Pedi) who claims he’s not a pimp even though two ladies of the evening hand over their money to him each night. There’s lawyer Willie Oban (Bradford Dillman) drummed out of the profession by his drinking, and there are a handful of other patrons who one way or another hide behind alcohol to mask the ugliness of their own situations. As Hickey makes his case to his drinking buddies for letting go of all their delusions in order to find true happiness, secrets from his own past are shockingly revealed.

Eugene O’Neill wrote this masterful play in 1939 but withheld it until after World War II had concluded realizing that his nihilistic drama might not be so warmly received in a world that needed hope above all things. When it was produced in 1947, it had a successful Broadway run, but it wasn’t awarded the Pulitzer Prize likely because its impact was blunted by a less-than-brilliant actor playing Hickey. It’s basically portraying a war between illusion and reality eventually concluding that holding on to only one at the expense of the other is humanly self-defeating. The play is distinguished by a succession of lengthy monologues by the habitués of Harry’s bar from whom we glean their sad histories and witness first-hand the illusions (called “pipe dreams” in the play) that sustain these pitiable drunkards, and Thomas Curtiss’ screenplay (in the almost four-hour version) includes most of them. Having cut his teeth on directing sterling character pieces for Playhouse 90 and other live television drama, John Frankenheimer is in his element letting these marvelous actors bring many colors and dimensions to the lives of these human wrecks using long takes when appropriate but also not directing it like a photographed play but like a real movie with wonderfully creative placement of actors in the frame as various actors pontificate their characters’ false hopes and dreams but also utilizing close-ups (maybe a little too frequently) for maximum impact.

It’s an hour before Lee Marvin’s Hickey enters the scene, all the better to establish the personalities of some of the other major characters he’s going to work on during the play’s next two hours, but once Marvin appears, he has no trouble dominating the scene. While the lines may not fall as trippingly from his tongue as they did from, say, Jason Robards when he performed the role in the Landau’s television version of the play in the 1960s (and available on DVD for those who are curious), viewers may be impressed that he can hold his own with these stage-trained stars who surround him. It’s Robert Ryan, however, who steals the show making his every nuance as down-and-out former insurrectionist Larry Slade something worth celebrating. His combative relationship not only with Hickey but also with young rebel Don Parritt (Jeff Bridges) who’s desperate for Slade’s comfort and advice make up the play’s most substantial subplots. Bridges’ eager desperation is palpable and an early career high point for him. Fredric March adds an Irish lilt to his performance as the cowardly Harry Hope (this would be the last film for both Ryan and March), and Tom Pedi as the Italian bartender with prostitutes as a sideline business offers a grounded and ingratiating portrayal of another soul determined to live life his way. Moses Gunn has a prideful authority as the janitor with delusions of grandeur, and Bradford Dillman, while perhaps a bit over-the-top on occasion, has some effectively wretched moments once he sobers up. The entire supporting cast does their roles proud.

Both the three-hour and four-hour versions of the film (on separate Blu-rays) are framed at 1.85:1 in 1080p resolution using the AVC codec. The four-hour director’s cut version offers a very variable viewing experience. The cut pieces which have been put back in are easily distinguishable from the theatrical cut with a difference in density and color timing (similar to the look of the cut pieces put back into Criterion’s It’s a Mad, Mad, Mad, Mad World). The look throughout is warmish brown, and color values are middling. The grain structure of film is retained throughout but sometimes in low light gets very harsh. There are some dust specks, debris, and slight damage (especially in the cut pieces), but one gets so absorbed in the drama that they cease to be much of a problem. The three-hour version has much more consistent color timing (and is lighter in tone) and fewer age-related artifacts. Both films have been divided into 8 chapters. There are also two intermissions included in the presentation of each film.

The three-hour version offers an uncompressed LPCM 2.0 mono track (1.5 Mbps) while the four-hour version uses a lossy DTS 2.0 mono track. Both present the dialogue very nicely, and since there is little music in the movie (just the main and end credits and a few songs sung by the patrons mostly unaccompanied), there isn’t anything to get in the way of the beautiful O’Neill language. The PCM track seems a bit brighter than the DTS track, and the DTS track does contain a bit of flutter but is otherwise faultless.

Each version of the film is offered on a separate Blu-ray in the case. On the second disc are the other bonus features for the set:

Edie Landau Interview (26:16, SD): the widow of American Film Theatre producer Eli Landau explains where the concept of the program came from and the triumphs and tragedies of its two-season run.

Eli Landau: In Front of the Camera (6:30, SD): Eli Landau’s filmed thanks for a successful first season of the American Film Theatre with clips from the eight productions of the first year.

American Film Theater Trailers: Butley, A Delicate Balance, Galileo, The Homecoming, Jacques Brel Is Alive and Well and Living in Paris, Lost in the Stars, Luther, The Maids, The Man in the Glass Booth, Rhinoceros, Three Sisters.

John Frankenheimer’s The Iceman Cometh brings one of Eugene O’Neill’s greatest and most accessible plays to audiences in a wonderfully nuanced presentation. Kino Lorber has thoughtfully included both the three-hour theatrical presentation and the four-hour director’s cut of the film on separate discs along with some familiar bonus material concerning the American Film Theatre. Recommended! 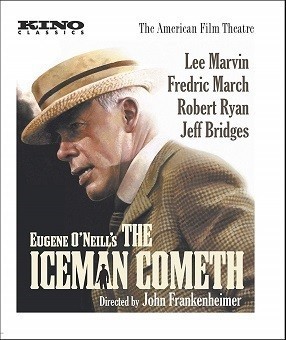