Anne Hathaway and Rebel Wilson star in The Hustle, a gender-changing remake of the far superior Dirty Rotten Scoundrels.

According to the special features, it was star Rebel Wilson who approached MGM and the producers of The Hustle to remake Dirty Rotten Scoundrels but to cast her in the Steve Martin role and Anne Hathaway in the Michael Caine role. And why not, as MGM keeps remaking films in their library with mediocre results. Am I being too harsh? I don’t think so, since the biggest (and only) laughs in The Hustle can be found in the movie’s trailer.

Penny (Rebel Wilson) is a small-time con artist, duping unwitting men out of a few hundred dollars in a Tinder scam or a free meal. Josephine (Anne Hathaway) is a wealthy high-risk con artist, bilking unwitting men out of six-figure items of jewelry. When the two meet on a train bound for the French Riviera, Josephine does her best to redirect Penny to the next destination, only to find Penny swindling Josephine’s marks. Josephine offers to train Penny on the art of the high-risk con, hoping that Penny will fail and leave with her tail between her legs. When Penny succeeds, Josephine refuses to pay her, telling her that she is in training and therefore should not be paid. Continually crossing paths, the two women agree on a bet, that the first one to con Thomas (Alex Sharp) out of $500,000 can stay in France, the other must leave for good.

The Hustle could be considered a con on the audience, since no one I know was begging for a female Dirty Rotten Scoundrels. The screenplay (credited to four writers, including Dale Launer who wrote Scoundrels and is also listed as an Executive Producer) and first-time director Chris Addison can’t seem to keep the story in focus. Characters and subplots are introduced and then never heard from again, jokes fall flat much more often than they succeed, and actresses Hathaway and Wilson, two accomplished comediennes, struggle to keep the movie afloat but also fail to do so. Do yourself a favor and just watch the trailer – the only funny parts are in there.

The Hustle is another great looking Blu-ray from Universal (who is now distributing new MGM releases). Colors are bold and vivid throughout without ever appearing oversaturated or blooming. Detail is excellent, from the textures of Ms. Hathaway’s designer fashions to the unkempt facial and skin features of Ms. Wilson during the Lord of the Rings scam.

The DTS-HD MA 7.1 track does not disappoint, providing a deep soundstage with lots of activity, surprising for a comedy. Music and effects are spread across all 7 channels, with LFE providing a nice low end extension to music and effects like the rumbling of a train. Dialogue is clear and understandable throughout.

Hitting the Mark (1080p; 4:34): The cast and crew discuss how adapting the film with female leads was a good idea.

Comedy Class (1080p; 5:50): The comedic talents of Anne Hathaway and Rebel Wilson, as well as first-time director hris Addison (who got his start directing sitcoms).

Audio Commentary with Director Chris Addison: The director discusses making the film in great detail, including some of the more improvised scenes.

DVD Copy: The movie in 480p and Dolby Digital audio, plus all of the special features listed above.

Digital Copy: An insert contains a code to redeem a digital copy on iTunes. My code redeemed as 4K (no HDR).

I’ll give the movie extra points for its Video and Audio presentation, but the movie itself was ill-conceived and a waste of time. 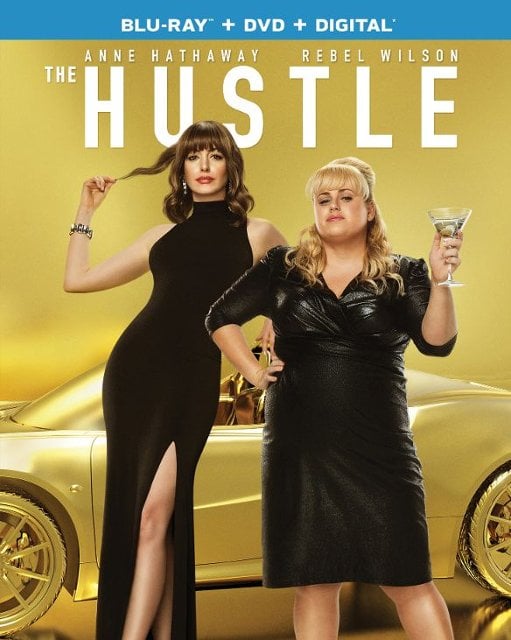