Posted on November 26, 2019 by Timothy Bodzioney
A bad transfer of a Monster Kid favorite. 2.5 Stars

VCI has released the 1939 Bela Lugosi mystery, The Human Monster on Blu Ray.  The Human Monster is based on Edgar Wallace’s 1924 novel The Dark Eyes of London.  VCI is advertising this release as a 2K transfer off of 35mm fine-grain elements.  The movie is silly, and its only defense can be as a guilty pleasure – but I plead guilty to liking silly very much. I had high expectations for this but was once again disappointed by VCI’s lack of quality control.

The Human Monster is one of those B movies that are so preposterous that if you’re unwilling to surrender yourself to its innate craziness there’s no point in watching.  In fact, the craziness is one of the reasons to watch – another being the presence of Lugosi.

The Human Monster takes place in London and opens with a body being washed ashore the banks of the Thames.  This is one of several similar recent murders.  The ever-quick Scotland Yard smells foul play and the lowly regarded Detective Inspector Larry Holt (Hugh Williams) is assigned the case.  Holt is partnered with Chicago flat foot Lieutenant Patrick O’Reilly (Edmon Ryan) – don’t bother asking why an American cop is involved and why the actor portraying him doesn’t have a D at the end of his first name; this could be the film’s biggest mystery.  It doesn’t make sense and it will only make your head hurt trying to figure it out, just go with it.

What all of the murdered men have in common is they all have recently signed life insurance policies with Dr. Feodor Orloff (Bela Lugosi) and have named The Dearborn Home for the Blind, run by the kindly, and elderly Professor Dearborn, as sole beneficiary.  Now wait a minute, you mean to tell me that even in 1939 there were suckers, I mean men, who would go to an insurance agent named Dr. Orloff?  Okay, I’m buying, after all, I consult with a palm reader for medical advice – she’s cheaper than a doctor and there’s no deductible.  Though I do confess that I would be suspicious of an insurance agent who claims he is a misunderstood medical genius – especially if he’s Bela Lugosi!

Dr. Orloff is clever and hooks only unattached victims.  Orloff’s latest mark is Henry Stuart who comes to Orloff in desperation for an advance on his insurance policy.  Everything is fine until Orloff learns that Stuart has a daughter, Diana (Greta Gynt).  Lugosi’s reaction to this news is wonderfully overly theatrical.  But Orloff decides, what the hell and bumps off Stuart anyway.

Stuart’s daughter works with Inspector Holt to crack the case.  The two ‘meet cute’ and join forces as Diana takes a job at the home for the blind.

Now we’re up and running.  For the three people reading this that haven’t seen this movie, I will not reveal any more plot for fear of spoilers.

Orloff is quite the operator.  He has set up a home for the blind, using residents as his gang.  And he tortures them to get them to do his bidding.  Not to belittle the blind, but why one would use blind people for criminal activities is beyond me.  But Blind Jake is pretty scary looking, though I wouldn’t think it would take much to escape from him.  This has always been my objection to The Mummy as a threat.  I love the idea of The Mummy and its theme of timelessness but as a monstrous threat?  I’m not so sure about that.  The Mummy, like Jake, shambles along and could easily be eluded.  Both look scary but even at my advanced age after I stopped screaming, I could outrun both.

The Human Monster based on an Edgar Wallace mystery The Dark Eyes of London was filmed in England in 1938.  It was remade in West Germany in 1961 as Dead Eyes of London as part of the popular Wallace inspired Krimi cycle of films.  The Human Monster was directed by the prolific but forgotten journeyman Walter Summers.  Walters interestingly is the father of future director Jeremy Summers, known for directing a 1960s Wallace adaption Five Golden Dragons (maybe it was genetic?) and The Vengeance of Fu Manchu.  One could make the argument that the 1960s resurrection of Fu Manchu was partially inspired by the success of the German Wallace films.

It’s remarkable to me that a writer as popular as Wallace was during his lifetime is almost completely forgotten today.  He wrote hundreds of stories and novels and was working on the script of King Kong at the time of his death.

The Human Monster is historically significant as the first film to be awarded the British film rating ‘H’ for horror.  This came at the end of England’s brief ban on horror films and is explained in depth by film historian Gary D. Rhodes is his excellent commentary.

Let’s get to the only reason to watch this movie, Bela Lugosi.  In the US it was released by Monogram Pictures.  It isn’t officially part of Lugosi’s 1940s Monogram 9, though it could be called a predecessor to those movies.  The biggest flaw of The Human Monster is that it’s not as wacky as the later Monograms.  Those movies reach illogical heights unimagined in a movie like The Human Monster.  For all of the violence and cruelty depicted in the movie, it’s too restrained, outside of, and this is big, Lugosi’s performance.

Lugosi is wonderful in The Human Monster giving an outrageously over-the-top melodramatic performance.  As I stated above, his reactions are played for the top balcony. His gleeful expression as he drags the dead ‘Dumb’ Lou across the floor in preparation to flinging him several stories down into the Thames is priceless.

There’s some mumbo jumbo involving Orloff, like characters Lugosi played in Dracula and White Zombie having the (supernatural?) power to hypnotize.  This is a throw-away as it is used once toward the beginning of the movie and dropped.   If you got Lugosi, you might as well have him hypnotize someone.  The producers knew what they were doing as a close up of Lugosi’s eyes are superimposed over London Bridge in the opening titles.  I’m guessing that teenaged Ed Wood saw this as it could be the first of Lugosi’s ‘misunderstood genius – banished by the medical community’ roles.

Bela Lugosi was a horror star.  His name sold tickets to genre fans.  Like other actors including Boris Karloff, Lon Chaney, Jr., Peter Lorre, Vincent Price, Peter Cushing, and Christopher Lee he is fondly remembered by fans for his work in the genre.  All of these actors have one thing in common, and that there is something eccentric about them that prevented them from playing conventional characters.  All of them had a commanding screen presence.  Who do you watch when these actors are on screen?

Lorre, Chaney, and Price all had long careers as character actors in studio films along with their genre work.  Cushing was a BBC star before his horror career.  Lee was luckiest and the last 20 years of his career were primarily in big-budget films outside of horror.  Karloff’s film career from the mid 30’s on is almost exclusively in horror films, but he had a respectable parallel theatre career appearing on Broadway in Arsenic and Old Lace and Peter Pan.

Lugosi was not so lucky.  With the exception of Lubitsch’s Ninotchka, he doesn’t appear in any Hollywood films outside of horror.  Even his theatrical career seems hopelessly rooted in the genre.  Some assert that he never mastered the English language.  While he isn’t as adept as fellow Hungarians Peter Lorre or Paul Lukas, I don’t really buy that.  His line readings can be nutty, but I don’t get the sense that he’s doing it phonetically.

Lugosi was very effective in films like The Black Cat, The Son of Frankenstein, The Wolf Man, and The Body Snatcher.  With the exception of a couple of the above-mentioned films along with The Return of the Vampire and Abbott and Costello meet Frankenstein, Lugosi spent the final 15 years of his career toiling on poverty row and later much worse with Ed Wood.

Lugosi also was unlucky in death (as if anyone can control that!).  He died living under modest circumstances in August of 1956, a year or so before the popular Shock Theatre package was released to television.  Had he lived a few years longer he certainly would have had a career resurgence and more importantly the financial rewards that would have gone with it.

VCI claims that this edition is based on a 2K scan of a 35mm fine-grain print.  Who knows the source of the print?  I don’t know how to delicately put this, but it looks mostly terrible.  Some scenes look ok with decent contrast and others look muddy with little contrast.  It’s fairly battered as well and it’s obvious that no clean-up has been performed.  VCI is a small company that releases films that otherwise might not be released and deserve support, but they never quite seem to get it right.  I’ve ordered a couple of the recently released Universal serials and while they look relatively clean, they look like raw scans without any post scan tweaking.

The audio is actually worse than the video.  I had to crank up the volume of my system and it was still hard to make out sections of dialogue.

A commentary track by Gary D. Rhodes.  This is a very good commentary.  It’s well researched with plenty of background, production details, and the film’s critical reception.  Rhodes loves the movie and that comes through in the commentary.  His explanation of Britain’s horror film ban of 1936 and its ramifications on American horror production is very detailed and the most plausible explanation I’ve ever heard or read.

A commentary track by film historian David del Valle and writer and ‘monster kid’ Phoef Sutton.  This is a very bad commentary.  It includes lots of misinformation, gossip that’s been debunked and speculation.  Towards the end of the movie del Valle misidentifies a character who was killed in the first reel.  It’s this character’s murder that sets the movie in motion!  He doesn’t appear to be paying attention to the very movie he’s talking about.  This was Sutton’s first commentary and I felt bad for him.

A US re-issue trailer

The Human Monster is a missed opportunity.  The movie’s a lot of fun.  I was hopeful for a better transfer.  I’ve read that the BFI has original elements on this title.  Maybe we’ll luck out in the future and a better transfer will get issued. 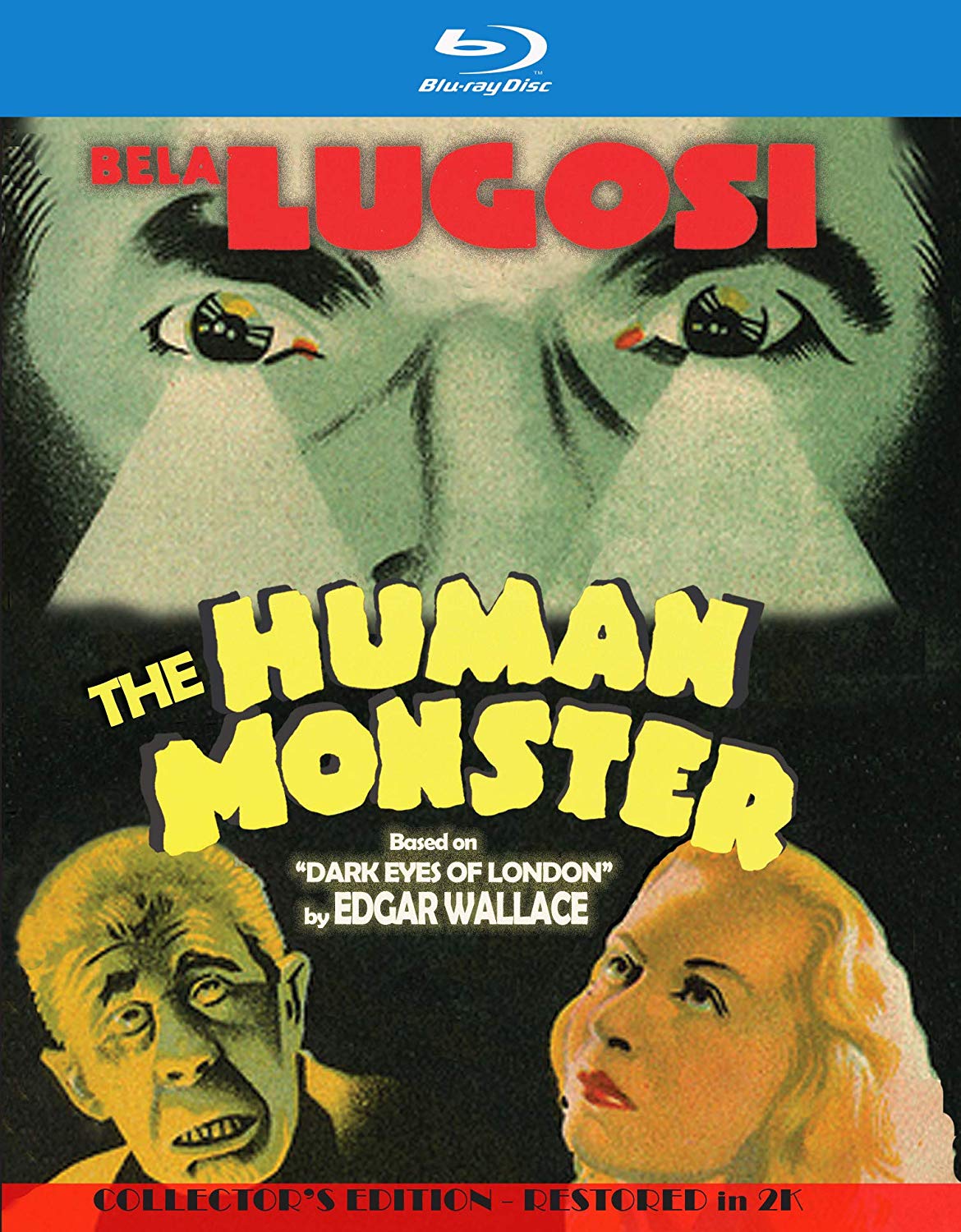