Robert Redford leads a motley crew of bandits on a jewel heist that goes hilariously wrong at every opportunity. Hired to do a job he’s unenthusiastic about to begin with, every complication imaginable threatens to hinder his chances of success, but with a secondary plan up his sleeve, he’s too clever to just give up. Amusing beyond belief, The Hot Rock is a hidden gem of early 1970s filmmaking.

The Hot Rock is a hidden gem of early 1970s filmmaking which captures Robert Redford having more fun than his developing screen persona would later allow him to have. While he rose to mega stardom on the heights of such films as Butch Cassidy and the Sundance Kid and The Sting which deftly blended drama with moments of humor, he would soon become more associated with more thoughtful films like The Candidate, The Way We Were, All The President’s Men and Three Days of the Condor. While Redford proved his dramatic abilities in all of those films, there’s something inescapably inviting about Redford playing comedy, and The Hot Rock may be his best effort in that regard. Caper films live or die by their ensemble, and The Hot Rock is no exception. Though Redford is unquestionably the lead, he’s assisted here by George Segal, Ron Liebman and Paul Sand as his associates, all playing the types of characters that Redford would just as soon avoid.

The film opens with John Dortmunder (Redford) being released from prison, where he seems to have finally turned over a new leaf. However, as soon as he’s picked up by his brother-in-law Andy Kelp (Segal), he’s pitched a heist that he can’t quite ignore. It turns out that Dr. Amusa (Moses Gunn), a diplomat from an African nation working at the United Nations, wants a jewel that’s being displayed at the Brooklyn Museum. According to Amusa, the jewel was stolen from his country during colonial times, and would be a great source of pride if it could be returned. Dortmunder and Kelp recruit an explosives expert, Allen Greenberg (Sand) and a driver, Stan Murch (Liebman) to assist. Though initially hesitant to get involved in the complex heist, Dortmunder ultimately feels compelled to assist his hapless brother-in-law. When the initial heist results in the jewel being swallowed by Greenberg as he’s apprehended by police, Greenberg’s lawyer father Abe (Zero Mostel) convinces the group to break his son out of prison both to secure the jewel and save his son. But nothing goes easily for Dortmunder, and each new attempt to solve a previous problem leads only to a new set of problems.

The cast here is absolutely fantastic. Redford delivers one of the best performances of his career, appearing to effortlessly underplay Dortmunder with a variety of poses, sly looks and ticks that allow the audience to see Dortmunder’s wheels turning as he evaluates each situation. The hapless crew is played to perfection by Segal, Leibman and Sand, who are simultaneously excellent at portions of their craft while just about helpless with everything else. Gunn practically steals the show with his deadpan portrayal of the humorless diplomat who finds his simple request getting more complicated at every turn. And of course, Mostel is able to blend his large physicality with his character’s scheming to make his lawyer character unforgettable.

The screenplay is by William Goldman, who delivers some of his best work in a script which is all the more funny for not trying to show off its sense of humor. Goldman, adapting a novel by Donald Westlake, trusts that by setting up each situation without telegraphing comedy explicitly, that the laughs will accumulate as each situation gets away from the protagonist. As a result, the humor has a certain timeless quality to it, where the characters themselves are unaware that they’re in a comedy, making their genuine reactions to each disaster all the more effective. The direction, by Peter Yates, is sharp and effective, never lingering to belabor a point, trusting in the quality of the actors and the writing to sell the story. Because the film isn’t played exclusively for laughs, there’s real suspense in each stage of the caper, which makes the film a rare example of an “edge of your seat comedy.”

The Hot Rock is presented on this Twilight Time release in its original aspect ratio of 2.35:1. The transfer is sheer perfection. The video is absolutely pristine, without a hint of dirt, damage or debris. Colors appear strong, natural and unfaded. Film grain appears authentic and unobtrusive and accurate to the period. Director Yates uses the camera to outstanding effect, with wonderful examples of framing throughout the entire film, and the transfer perfectly captures every nuance in the frame. This is a well shot film which has been gorgeously rendered on this release.

Two audio options are offered on this disc, both presented in the lossless DTS-HD MA format: a 2.0 stereo option and a mono option (also presented as a 2.0 track, though listed as 1.0 on the disc’s menu). Though the disc defaults to the stereo option, the mono here is the preferred option. The mono audio is crisp and clear, with the score from Quincy Jones blending well with dialogue and sound effects in perfect balance. The stereo track appears to be one of those artificial stereo tracks that Fox often created for home video purposes, and in comparison to the mono track, sounds a little weak, with not much stereo separation in evidence. Though neither track shows evidence of hiss, crackle or any other age-related artifacts, the mono track is the stronger of the two.

Audio Commentary with Film Historians Lem Dobbs, Julie Kirgo and Nick Redman – Dobbs, Kirgo and Redman discuss the film in a good natured chat that examines the original source material and compares it to the finished product, while also reflecting on why the film has become a personal favorite to them.

Original Theatrical Trailer (2:57, SD) – Cropped to 1.78:1, the trailer perhaps reveals to many of the film’s more amusing moments out of context, showcasing the film’s humor at the expensive of its sophistication.

Booklet – Julie Kirgo’s admiring essay perfectly captures the spirit of the film, and is accompanied by production stills and original poster art.

The Hot Rock is a comedic gem that shows its cast and crew at the top of their game. William Goldman’s fantastic screenplay, and the sharp direction by Peter Yates, allow the fantastic ensemble cast to set a new standard for the comedic heist film. Though the film was not a hit upon its original release, it’s hard not to see the influence it had on later productions like the Steven Soderbergh remake of Ocean’s Eleven. Thanks to a terrific transfer and a fun commentary, The Hot Rock is ripe for rediscovery on this excellent Twilight Time release. 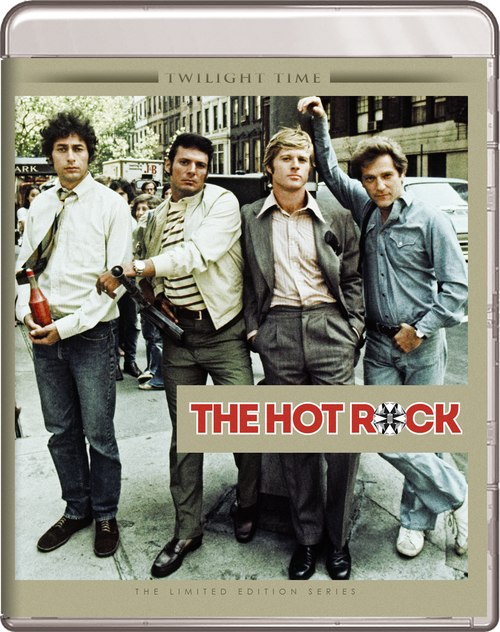