Forum List What's new Dark Style Change width
Log in Register
What's new Search
Menu
Log in
Register
Navigation
Install the app
More options
Dark Style
Close Menu
Posted on November 30, 2020 by Todd Erwin
You are using an out of date browser. It may not display this or other websites correctly.
You should upgrade or use an alternative browser.
Worthy upgrade, but no disc extras 4.5 Stars

Warner Bros. Home Entertainment has released The Hobbit Trilogy in a 6-disc set on 4K UHD Blu-ray just in time for holiday gift-giving for the home theater enthusiast.

For years after the release of The Lord of the Rings: The Return of the King, Peter Jackson had hinted that he had wanted to complete the saga by going back and shooting The Hobbit with as many of the same cast members from The Lord of the Rings as possible. And for years, it seemed like a project that would never happen, as the rights to The Hobbit were tied up at another studio (MGM). Eventually, Warner (who had demoted studio New Line to essentially a production company after a string of unsuccessful movies after LOTR) and MGM had come to an agreement to share production costs for two movies based on the much shorter Hobbit novel, with Jackson producing and Guillermo del Toro (Hellboy) directing. MGM’s financial woes and eventual bankruptcy in 2010 caused production delays and led del Toro to leave the project, with Peter Jackson stepping in once more to direct what was initially two films, The Hobbit: An Unexpected Journey and The Hobbit: There and Back Again, and Jackson announced that he would be shooting The Hobbit in native 3D on Red Epic cameras in 5K at a higher frame rate of 48fps. Six months before An Unexpected Journey arrived in theaters in 2012, Jackson announced that he would be making three films instead, with the second film becoming The Desolation of Smaug and the finale was re-titled The Battle of the Five Armies four months after the release of Smaug.

Much of the cast from LOTR did return, with Ian McKellan reprising his role as Gandalf, Hugo Weaving as Elrond, Cate Blanchett as Galadriel, Christopher Lee as Saruman, Andy Serkis as Gollum and Orlando Bloom as Legolas, with cameos by Elijah Wood as Frodo and Ian Holm as the older Bilbo. Martin Freeman (Sherlock) was cast as the younger Hobbit-era Bilbo, Richard Armitage (Captain America: The First Avenger) as dwarf king Thorin, Lee Pace (Guardians of the Galaxy) as Wood Elf King Thranduil, Luke Evans (Beauty and the Beast) as Laketown bargeman Bard, Stephen Fry (V for Vendetta) as Master of Laketown, Ryan Gage (Outlaw) as the smarmy Alfrid, and Benedict Cumberbatch (Sherlock, Doctor Strange) as both the Necromancer and Smaug.

While Jackson wasn’t quite able to capture all of the magic and wonderment in The Hobbit trilogy as he did in his Lord of the Rings trilogy, the movies are still a testament to Jackson’s artistry as a director and ability to create epic movies on a very grand scale. Like the Lord of the Rings, Peter Jackson created extended cuts of all three Hobbit movies, and for me I prefer those extended cuts (especially Desolation of Smaug). For the most part, the extended cut of Unexpected Journey expands the prologue and adds some additional dwarf and goblin songs. Smaug contains some additional bits and pieces, with the biggest change being the alternate scene of where Gandolf introduces the dwarves to Beorn. Battle of the Five Armies contains twenty minutes of additional violence, earning the Extended Cut an “R” rating.

The Hobbit movies were released theatrically in select movie theaters in 3D high frame rate (48fps), a process I found to be nauseating at times, especially on an IMAX screen. Due to the limitations of the UHD format, the films are presented here in 2D at a standard frame rate (24fps). Although each film was originally completed as a 2k digital intermediate in the 2.39:1 aspect ratio, a new 4k digital intermediate has been created using original 5k footage where possible (shots with no VFX), upscaling any 2k VFX shots to 4k, and then color graded to match the original DI’s under the watchful eye of director Peter Jackson. The 2160p transfers included in this set also include HDR10 and Dolby Vision high dynamic range. There is a noticeable increase in overall detail throughout both versions of all three films, with more natural shadings of colors and better contrast. The result is breathtaking, about as good as these films are likely ever to look.

The Hobbit films were also released theatrically with Dolby Atmos soundtracks, but at the time of their releases on Blu-ray, Dolby Atmos was not yet available on the format (the first Blu-ray release with Dolby Atmos was Transformers: Age of Extinction on September 30, 2014, less than three months before Battle of the Five Armies arrived in theaters). The DTS-HD MA 7.1 mixes found on those Blu-ray releases were reference quality (and very demo-worthy) at the time of their releases, yet the new Dolby Atmos mixes included on these 4K UHD Blu-ray discs are phenomenal. Bilbo’s encounter with Gollum in Unexpected Journey and his encounter with Smaug in Desolation of Smaug make excellent use of spatial audio as Gollum and Smaug can be heard wondering around the caverns behind and above us with pinpoint accuracy, so much so that you may be tempted to look where the voices are coming from and be disappointed that you don’t see anything. LFE is strong, providing extra emphasis on heavy footsteps, smashes, explosions, etc. Howard Shore’s score is also much more immersive, completely surrounding the viewer. Dialogue is clear and understandable throughout.

Warner has opted to not include any special features in this set, not even the extensive commentary tracks from the extended editions. The studio has announced, though, that “a 4K UHD ‘Middle Earth’ Ultimate Collector’s Edition featuring the theatrical and extended cut of all six films, along with new bonus content, previously released Blu-ray discs of The Hobbit Trilogy, and remastered Blu-ray discs of The Lord of the Rings trilogy will be released in the summer of 2021.”

The only “extra” included in this set is a Movies Anywhere code to redeem digital copies of both theatrical and extended cuts of all three films in UHD. the included code gives you access to the following special features within the Movies Anywhere app:

Peter Jackson Invites You to the Set (HD)

The Desolation of Smaug (Extended):
The Appendices Part 9 (HD)

The Battle of the Five Armies (Extended):
The Appendices Part 11 (HD)

It’s been a long time coming, but Warner’s UHD release of The Hobbit Trilogy is outstanding from a presentation standpoint, with either edition of all three films being excellent demo material. Fans may want to wait six months, though, for the Ultimate Collector’s Edition to see what new special features will be included. Otherwise, hold on to your previous Blu-ray or DVD editions.

I got mine this morning at Target ! It appears that nearly all of the special features from the physical media releases are available on Apple TV app (only on Apple TV devices, though).

I just noticed that Movies Anywhere only offers the movies in 4K with Dolby Vision and HDR10, but only 5.1 audio (no Atmos).

I'll stick with these in the format they were shot in (3D) rather than downgrade.
You must log in or register to reply here.

UHD Review The Lord of the Rings: The Motion Picture Trilogy UHD Review 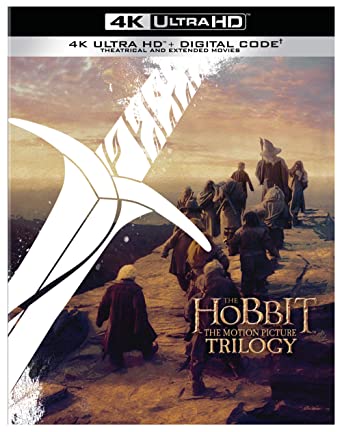